Climate Change as a Security Risk 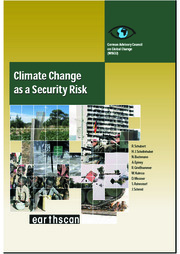 The threat of Climate Change can not be resolved adequately with the existing classical security policy tools. This observation is conveyed by the German Advisory Council on Global Change (WBGU)’s New Report Climate Change as a Security Risk. The Report concludes without resolute counteraction, climate change will overstretch many societies’ adaptive capacities. In some regions of the world, this may result in internal destabilization processes and state failure with diffuse conflict structures, inter-state conflicts and an overstretching of the international system. Climate policy and strategies for adaptation to climate change are thus emerging as key elements of preventive security policy.

The Report postulates several threats due to the impacts of climate change on international stability and security. The impacts of unabated climate change would limit countries' problem-solving capacities. There will be more intensive distributional conflicts between the main drivers of climate change and those most affected. A key line of conflict in global politics in the 21st century will therefore divide the newly industrializing countries and the poorer developing countries. The industrial countries could be accused of knowingly allowing the livelihood of millions of people to be put at risk through their failure to take prompt action to combat climate change. The number of migration hotspots around the world will increase substantially as a result of climate change. Depending on the type and intensity of the climate impacts, there could have a significant and adverse effect on the global economy.

In this backdrop, the WBGU in this flagship report summarizes the state-of-the-art of science on the subject of “Climate Change as a Security Risk”. It is based on the findings of research into environmental conflicts, the causes of war, and of climate impact research. It appraises past experience but also ventures to cast a glance far into the future in order to assess the likely impacts of climate change on societies, nation-states, regions and the international system.

The report identifies a set of regions in which, due to their special ecological, demographic or socio-economic features, climate change will present particularly major challenges in the next decade. The South Asia region is one of the hotspots. The consequences of climate impact include a rise in sea level, threatening areas such as the densely populated Ganges delta, changes in the monsoon rains that are so important for agriculture, the melting of the glaciers in the Himalaya region and the foreseeable increase in heavy rain events and intensity of tropical cyclones. These consequences will affect a region that is already among the most crisis-ridden in the world and whose state institutions and intergovernmental capacities are weak to address the issue. The Report, therefore predicts that climate change will overwhelm political structures and will further exacerbate economic and social problems in South Asia.

The effects of climate change on the economy will vary in South Asia. Pakistan’s irrigation agriculture could be seriously affected. Severe floods could overwhelm the capacity of Bangladesh to deal with disasters. As a result of the threatened loss of arable and residential land through flooding, it is likely that migration towards India will increase and that existing conflicts will escalate. The instability in the east of the subcontinent is likely to increase and relationships between the countries will come under additional strain. In India, it is likely that the poorer states in the north and northeast will be most affected by climate impacts. Economic and social inequality within the country is likely to increase further. Decreasing water availability in the dry seasons will lead to increased incidence of usage conflicts both locally and between countries. Not least, water conflicts between South Asian countries and China arising from the reduction in the flow of glacier water from the Himalayas represent a potential problem.

In WBGU's view, resolute climate policy action is needed within the next 10–15 years, in order to avert the socioeconomic disruption and negative implications of climate change. The Report recommends that the German Federal Government implement the following measures: pursuing international climate policy, initiating a process modelled on the Conference on Security and Co-operation in Europe (CSCE), reforming the United Nations, stabilizing fragile and weak states, recognizing development policy as preventive security policy, expanding global information and early warning systems and developing a global convention for environmental migrants.

Reviewed by: Avilash Roul, Society for the Study of Peace and Conflict, New Delhi.