Terrorism in South Asia: Impacts on Development and Democratic Process 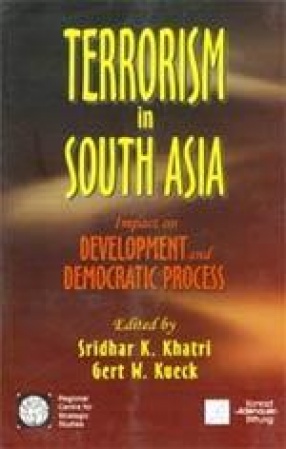 The terrorist attacks in New York and Washington DC on September 11, 2001, shocked the international community. Terrorism, which by and large was considered a phenomenon limited to the Middle East and South Asia, was threatening the world's most rich and powerful — the United States. The initial response to these terrorist acts was a knee-jerk military attack led by the US on the bases of al-Qaeda and its host Taliban in Afghanistan. As the dust settled in the mountains of ‘Tora Bora’, the international community shifted its attention to a much more serious business of understanding the anatomy of terrorism and various other issues related to it. Influenced by these developments, South Asia also witnessed a renewed interest in terrorism, which even before September 11 has been a substantial security threat for the countries in the region. The publication of “Terrorism in South Asia: Impacts on Development and Democratic Process” — a compilation of papers presented at an international conference held in Kathmandu during 23—25 September 2002, is one such product of this renewed interest in terrorism in South Asia.

Starting with an introduction by Sridhar K. Khatri — one of the two editors, this book tries to study different aspects of terrorism in South Asia. The first section is an attempt to present a global perspective on terrorism. According to Georg Witschel, the incidents of September 11 marked a visible transformation in the nature of international terrorism. Religion replaced ideology and ethnonationalism as the most dominant motivating factor behind terrorism, which had acquired a global characteristic through systematic networking between different cooperating groups. Similar changes were also visible in their organisational structure and operational strategy. The hierarchical leadership was replaced by decentralised authority or in some cases by certain guiding principles, while the terrorist attacks were concentrated on those targets that could communicate to the general populace the inability of their state to protect its citizens. To counter this form of terrorism, which blurs the distinction between internal and external security, Witschel prescribes an international coalition against terrorism. Preventing terrorism is also a prime concern for John M. Richardson. Drawing from Sri Lankan experience, he argues that terrorism has immense economic, social and political costs and to measure these costs, he employs different techniques and models. Based on his estimation of cost, he presents the case for an early warning system that would prevent the escalation of terrorism. According to him the cost of preventing terrorism would definitely be less than the cost of reconstruction.

Concentrating on South Asia, the second part of the book tries to assess the economic cost of terrorism on the countries of this region. All the papers in this section agree that terrorism not only has a direct impact on the different sectors of the economy of the affected countries, but it also creates unfavourable conditions for foreign investments, which has come to play an important role in the economic growth in this region. In Bangladesh, according to A. K. M. Atiqur Rahman, the presence of terrorism in the Chittagong Hill Tracts has led to the underdevelopment of this resource-rich region. The substantial presence of anti-social elements like Mastans, who create severe law and order problems, discourage external investment in the Bangladeshi economy. The slump in the international economy after September 11, which had an adverse impact on the Bangladeshi garment industry, added to the economic misery of this country. In Nepal, the tussle between the Monarchy, political parties and the Maoists to control the political imagination of this poor Himalayan country and the violence associated with it had an acute impact on different sectors of its economy. This is true particularly in the case of tourism, which not only contributes fifteen per cent of total foreign exchange earnings and five per cent of total GDP, but it also provides employment opportunities to a substantial Nepalese population. For Akmal Hussain, there is an intricate linkage between the rising of dictatorship, terrorism, poverty, and the deteriorating economy in Pakistan. In return for Pakistani involvement in the American covert war against the Soviet presence in Afghanistan, General Zia received American legitimacy for his regime and generous economic aid. As a result, the Pakistani economy became largely dependent on foreign aid neglecting the capacity of its domestic economy. The end of the Soviet occupation saw the drying of external aid to Pakistan and the resultant poverty and unemployment led to the rising of religious extremism in Pakistan. Saman Kelegama presenting the Sri Lankan case contends that even though Sri Lanka was the first country in South Asia to initiate the economic liberalisation in 1977, it could not capitalise on it because of sustained terrorism, first by the Marxist group, the JVP and then by Liberation Tigers of Tamil Eelam (LTTE). The military expenditure on fighting terrorism and often conventional war with LTTE drained Sri Lankan exchequer. Moreover, the perpetual peace and war situation in Sri Lanka also limits the scope of external investment in its economy.

Restriction of democracy could be both, cause and effect of terrorism. The failure of a democratic polity, according to Matiur Rahman, is characterised by the confrontational attitude of the two national parties, lack of inner-party democracy and use of anti-social Mastans, in Bangladesh, which would ultimately provide a greater role for military or consolidate Islamic fundamentalism. The next paper in the third section by Kanti Bajpai is an attempt to assess the impact of terrorism on Indian democracy. He argues that Indian democracy, which had liberal constitutionalism, civic nationalism, devolution of power, group rights, and culture of tolerance and accommodation as its basic feature, today due to the effect of terrorism is becoming more and more dominated by militarisation, emergency laws, constraints on discussion and debates and promotion of ‘action cult’. For him, the answer to terrorism in a plural society like India could only be found by promoting democracy and not by limiting it. In the case of Nepal, Lok Raj Baral contends that the failure of political parties to give good governance and a lack of clear cut policy on Maoists worked to strengthen the position of Maoists, who were able to capture the imagination of people by invoking Nepali nationalism and promising to end the oppressive Nepali ‘feudocracy’. Meanwhile, in Pakistan, General Musharraf secured the American legitimacy for his regime in the wake of the September 11 attacks. To secure General Musharraf’s cooperation in its war against terrorism, the United States not only stopped talking about the restoration of democracy in Pakistan but also gave legitimacy to every single act of the military ruler to consolidate his regime in Pakistan. Ijaz Hussain feels that security prevailed over democracy as a guiding principle of the US foreign policy towards Pakistan in post -September 11 era. Lastly, commenting on Sri Lanka, Jagath P. Senaratne contends that the domination of the Singhalese agenda on Sri Lankan polity and the neglect of the aspiration of the Tamil minorities caused the rise of Tamil terrorists and separatist movement. Attempts have been made to bring peace to this war-torn island nation, facilitated by Norway after September 2002, but durable peace, P. Saravanamuttu feels will be elusive unless backed by substantial economic development and willingness among the two communities to cohabit.

In South Asia, terrorism has for long been a factor influencing interstate relations. Accepting this, S. D. Muni in his paper discusses the situations of conflict and cooperation on the issue of terrorism in South Asia. India and Pakistan have a conflictual relation on the issue of terrorism. India accuses Pakistan and its ISI of sponsoring cross-border terrorism in Jammu and Kashmir and the North East and encouraging internal violence all over India. While Pakistan blames India for inciting ethnic and separatist strife in Pakistan. The relations between the two worsened further after the terrorist attack on the Indian parliament in December 2001, which saw India threatening to launch a full-scale war to end cross border terrorism. This situation, agrees Parvaiz Iqbal Cheema, proved detrimental for the weakening of regional security. India also had complaints against Myanmar, Bhutan, Nepal and Bangladesh for allowing the terrorist organisations of Northeastern India to utilise their territories to run terrorist camps. Sri Lankans, on the other hand, had problems with India helping Tamil terrorist organisations from Sri Lanka. Examples of cooperation are limited but worth mentioning. There has been cooperation between India and Nepal in the 1950s to deal with political revolts in Nepal and India sent its troops to pressurise the LTTE for the implementation of the 1987 agreement. On the regional level, the 3rd SAARC summit in Kathmandu (1987) adopted a resolution to suppress terrorism, which was further reinforced in the Summit of 2001. After September 11 attack there has been a renewed effort by the US to cooperate with the South Asian countries to end the South Asian nexus of global terrorism.

Evolving effective strategies to combat terrorism in South Asia is important as this region accounts for the highest terrorism-related deaths. Kumar Rupesinghe’s paper prescribes a framework for dealing with terrorism. He includes good governance, the role of civil society, early warning and response mechanisms and regional cooperation as components of his framework to prevent and combat terrorism. For P.R Chari, the weeding out of terrorism, which is intertwined with various legal and illegal social and cultural practices, could only be achieved through global and regional cooperation. Restriction on State-sponsored terrorism, weakening of theories like clash of civilizations, certain curbs on individual liberty— which strengthen terrorism etc, according to him, are important to deal with terrorism. Regional cooperation, Niaz A. Naik feels is extremely important to deal with various security issues, including terrorism, in the changed global security and economic environment. For this purpose, he supports the creation of a Security Organisation for South Asia (SOSA). Lastly, the conclusion by Muchkund Dubey highlights the important issues that were brought forward by the papers that contributed to this volume. He agrees, just like all other contributors, that the international community has failed to define terrorism, but this does not mean that the action needed to combat terrorism should be postponed. Moreover states, on their part, need to realize that their stability depends upon the stability and prosperity of other states. Hence, cooperation not confrontation is needed to combat this menace of terrorism.

Reading an edited volume has its own advantages and disadvantages. This book is not only important for the students, researchers, academicians and policymakers of this region to understand the different aspects and trends of terrorism, but it also brings the debate and discussion on terrorism and counter-terrorism into the public domain. However, just like any other edited book, this volume also has some limitations. First is the problem of repetition. In this book, almost all the papers have devoted substantial space for problems of defining terrorism and the arguments were almost the same. This often makes the reader skip this section and in the process overlook some of the vital arguments and facts. Secondly, there are papers in some sections that deal extensively with issues, which are not relevant for the subject. In an extensively lengthy and loosely –tied paper, such as I P Khosla’s, perceptual vigilance is the casualty. Nevertheless, the number of papers included in the book by authors from all over the region doesn’t allow any issue related to terrorism to remain untouched.