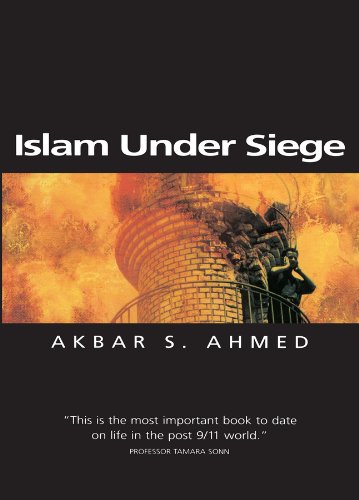 The world has changed a lot since September 11, 2001. A new government under the leadership of Hamid Karzai is ruling Afghanistan, which was earlier ruled by the Taliban and acted as a haven for Al-Qaeda. Iraq is under US control, and Libya has agreed to mend its ways. The initial knee-jerk reaction of revenge for the death and destruction caused by the September 11 attacks by the Americans has given way to a desire to understand the reasons behind these attacks. A wide variety of literature was produced globally, each attempting to explain the turn of events from its own perspective. Akbar S. Ahmed’s ‘Islam Under Siege’ is one such book that tries to answer some questions and clear certain misconceptions regarding the role of Islam in perpetuating this crisis.

The author has observed that Islam became a synonym for ‘terrorism’, ‘fanaticism’ and ‘extremism’ after September 11 (see Ahmed, 2003: 1), and questions are being raised: ‘why do they hate us?’ In the attempt to explain these questions, he uses his understanding of theology and his mother discipline, anthropology. He has effectively used the concepts such as 'asabiyya' propounded by Ibn Khaldun, meaning group loyalty or social cohesion, hyper-asabiyya, honour and post honour to explain the increasing violent tendencies among the Muslims.

According to the author, Islam requires believers to follow two categories of behaviour. First include belief in God, fasting, praying, charity and pilgrimage to Mecca. The second category includes faith in adl (justice), ishan (compassion) and ilm (knowledge). The absence of the second category of behaviour is evident from the emergence of Taliban and Al-Qaeda, the September 11 attacks and the instances of jubilation that followed it in the Muslim world. For the author, even the Taliban that projects itself as the flag bearer of Islam violate the tenets of Islam by discriminating against women and treating minorities harshly. According to the author, this tendency got strengthened, and the process continues due to the disintegration of the traditional notion of asabiyya and honour.

Globalisation, with its capacity to affect every individual, has challenged the primary forms of identity- family, tribe, state and religion. In this vacuum of insecurity, religion becomes a vehicle of response to globalisation for individuals, which often gets translated into violence. Further, violence against the Muslims, especially against the Muslim women in Kosovo, Chechnya and Indian states of Kashmir and Gujrat, gives an excuse to extremist groups to save Muslims from dishonour. Therefore, the collapse of asabiyya as an impact of globalisation also meant the collapse of adl, ishan and ilm, and the rise of hyper-asabiyya, a new mutated and dangerous form of asabiyya. Taliban is one such form of hyper-asabiyya. For the author, no one is to be blamed more than the leaders of the Muslim countries for spreading the culture of violence among the Muslims. According to him, apart from the Iranian government and Taliban, the leaders in the Muslim world are of royal descent or are military dictators, who are more interested in maintaining their rule by obeying the US than looking after the needs of the masses.

Lastly, the author identifies the responses of the Muslims to the crisis into two categories. First is the policy of inclusion to generate dialogue and harmony for bringing different societies and people together. The second category encourages the activities that promote exclusion, confrontation and rejection. While prescribing the attitude to be adopted in the future, the author rejects the second category as it confirms the ‘Clash of Civilisations’ theory propounded by Samuel Huntington and supports the first category that believes in the ‘Dialogue among Civilisations’ theory introduced by President Muhammad Khatami of Iran.

There is no doubt that the author, through this book, has been able to address the principal concern of answering certain uncomfortable questions that surrounded Islam as a faith in the aftermath of September 11. Still, he has raised certain issues that need some more discussion in the process. He argues that the other religions of the world should acknowledge the presence of Islam and allow Muslims to practice their faith with honour, for then only Islam will be a good neighbour to non-Muslims. Here, it should be pointed that the onus lies on the other world religions to understand Islam. Islam also needs to adapt/change itself for the uncomfortable situations that arise due to its increasing interaction with other religions.

Further, the author also questions the Islamic credentials of the Taliban for its demolition of the Buddha statues in Bamyan (Afghanistan) and considers it a ‘PR’ disaster for Islam. While in a similar situation, he blames all the Hindus for the demolition of Babri Masjid in Ayodhya (India) by a crowd without questioning their religious credentials and considers it as one of the prime reasons for the loss of honour Muslims felt the world over. Applying different standards for two different groups operating in a different part of the world having only similarity that they believe in extremist behaviour has unnecessarily questioned the author's academic credentials. Moreover, as the author expects the other world civilisations to treat the symbols of the Islamic faith respectfully, he could have avoided referring to the Hindu god ‘Hanuman’ as a monkey.

Reviewed by Niraj Kumar, Society for the Study of Peace and Conflict, New Delhi.