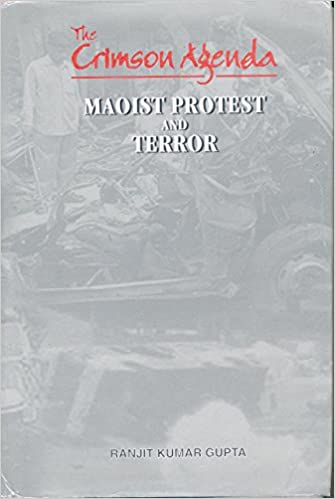 The Maoist insurgency in India (also known as Naxalite), which was started at Naxalbari in the Darjiling district of West Bengal in 1967, has now spread to 159 districts in fourteen states. They have virtually spread over 20 per cent of the total districts in India. Till the end of the year 2004, Naxalite violence had claimed 518 lives in 1,140 incidents against 348 deaths in 1,138 incidents in the corresponding period last year. The Naxalite problem is in certain respects more serious than the Kashmir problem. Apart from that, the insurgents are planning to set up a Compact Revolutionary Zone (CRZ) from Nepal to Andhra Pradesh.

Looking at the present situation, the book The Crimson Agenda: Maoist Pretest and Terror, by former Police Commissioner of Calcutta, Ranjit Kumar Gupta, is very important to understand the intricacies of the Naxalite movement in India. It is a useful book for strategic analysts, counter-insurgency experts and researchers. This is a book of 228 pages with 16 chapters, which starts with ‘prologue’ and ends with ‘postscript’.

The book basically discusses the radical changes of Naxalite outfits at strategic, operational, geographical, and cadre levels. The book starts with the Maoist insurgency in India, its expansion later, and its current status. The author argues that the present Maoist insurgents are better equipped and properly trained to wage guerilla warfare. They have learnt all these from past mistakes, which were committed by their leaders. Although Charu Mazumdar started guerilla war in India, he had never learnt from mistakes or failure in any operations. According to the guerilla warfare principle, leaders should learn from mistakes and change the strategy accordingly.

In West Bengal, Charu Mazumdar started the campaign in the rural area, but in the 1970s the movement failed in Calcutta because of the wrong strategy by leaders. The revolutionary situation in India could have been created only after training the cadres for a long revolutionary struggle. The Andhra Pradesh rebels, led by Muthanna Laxmana Rao, have avoided Charu’s mistakes and have made a strong impact in many rural areas of the state. More than one-fifth of Indian territory is now under the Naxalite influence. Similarly, the Communist Party of Nepal (Maoist) started the war against the government as late as 1996 after long training and preparation. They have almost reached the standards required by Mao Ze dong for guerrilla warfare. However, the CPN-Maoists have established links with the Communist Party of India-Maoists. The CPN-Maoist and the Indian Maoists help each other in training, procurement of arms, joint training camps, joint planning, etc.

The author says the modern day-Maoists have studied Mao’s thoughts carefully. They have also studied the actions of Ernesto ‘Che’ Guevara, who has left behind very practical and detailed instructions for launching a guerilla war.

In the present Naxalite resurgence, there seems to be no unified or central control of the Maoist activities in various parts of the country and no coordination and common understanding. The author has raised the question of whether the Maoists, operating under the banner of the PWG, would start their terrorist struggle in the urban areas also. Their killings have not yet reached the kind of figures that used to rock Calcutta in 1970-71, but their arsenal is strong, much stronger than the West Bengal urban guerrilla ever had. For some time, at least, they will stick to guerrilla principles. With a base in Telangana, they may turn to cities. Until now, urban terrorism has been avoided, the mistake and defeat of the urban Maoist insurgency are remembered by the new learners of the revolution.

In spite of the action of the state police force supported by paramilitary forces, the left-wing extremists have not only held out but have advanced, organizing strong bases in widening areas. Poor counter-insurgency strategies, inadequate studies of Naxal strategies account for the lack of an effective counter-terrorism action.

In Chapter Six, the author has discussed the socio-economic profile of the Medinipur district where the first Naxalite incident was reported in 1967. By the first half of 1970, the campaign to establish a liberated zone in Medinipur was over because of infighting in the Naxalite party. Another factor was the shift of Naxalite bases from rural areas to urban areas, particularly in Kolkata. The movement failed due to lumpenisation in the party and the disillusionment of the young with the leadership.

As a senior police officer during the pick of the Naxalite movement in West Bengal, the author analyzes the role of intelligence in counter-insurgency operations, because the anti-social and the Maoist combine often had to come out of secrecy, i.e., come out of their incognito presence. The present-day Naxalites are no more confined to traditional weapons. They are better equipped than state police forces and use the latest modern communication gadgets to track police movements. Gathering intelligence for the guerrilla command is a major contribution in support. The police force and the security forces have to know the terrorist intelligence gathering mechanism in order to bypass it. In Guerrilla warfare there is considerable devolution of power to the field-level activities. Hence, the arrest of a senior leader of the party would not affect much on its operations. In dealing with the Naxalites, the state needs professional troops and police forces to counter the Naxalites, who generally live in the sympathetic human environment.

The book lacks certain research requirements. The author has not mentioned the sources of data, statements and quotations. The information on the geographical reach of the present Naxalite outfits has not been updated. The author says the Naxalite outfit’s operating in India do not have any link with Northeast insurgent groups. But intelligence reports indicate strong linkages between Naxalite and some Northeast based insurgent outfits. Further, the book is silent on left-wing extremist outfits linkages with the LTTE and ISI. Instead of writing the Maoist Communist Center (MCC) the author has mentioned that the Maoist Coordination Center and the PWG (People’s War Group) pose the most powerful threat to the state.

Overall, the book highlights an important consideration for the academic and strategic analyst community in India. The author suggests that for the specific purpose of dealing in Naxalite threat, a Zonal Committee of the Eastern states, coordination at the administrative level should be formed. A strong strategic and tactical committee of the heads of the police of the affected states should do well in dealing with extremists. Simultaneously, the socio-economic wrongs should be corrected. The use of legitimate force is inevitable but the state does not have to confine itself to it. He justifies the use of legitimate force only if it is followed by reforms for implementation. A determined beginning has to be made to minimize the socio-economic wrongs.