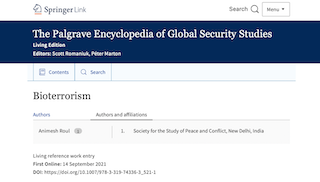 The threat of the intentional or deliberate use of disease pathogens or biological agents emanating from both rogue state actors and violent non-state actors (NSAs) remains a major concern for national and international security. By violent non-state actors, we generally mean armed insurgent groups, criminal syndicates, apocalyptic religious cults and jihadi terrorist groups and individuals. The rogue state actors are those countries that are irresponsible and dishonest and may develop, stockpile, and use biological weapons or pathogens targeting the civilian populace to kill or terrorize them. These countries might play a proliferator role by transferring bioweapon materials to terrorist organizations for geopolitical purposes.

Historically, state actors are not averse to use chemical weapons against civilians in conflict, although more recently a “chemical weapons taboo” seems to have taken hold across most of the international community (Price 1995), with a few notable exceptions to the nonuse of chemical weapons. There is no empirical evidence suggesting that states have resorted to biological weapons to settle political or military scores so far in the post-World War-II era.