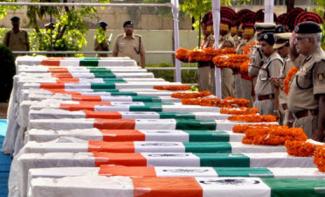 Seventeen security personnel including 12 from District Reserve Guard (DRG) and five from Special Task Force (STF) were killed by the CPI (Maoist) in Chintagufa in the Sukma district of Chhattisgarh on March 21, 2020 (Hindustan Times, March 22). The ambush was reportedly planned and executed by Madvi Hidma, who has been heading the battalion, one of the People’s Liberation Guerilla Army (PLGA) in Sukma for more than two and a half years from now. There are reports that recently came after the death of Ramanna, who was Chhattisgarh’s state in-charge of the CPI (Maoist) militia actions, particularly planning and execution of attacks against security forces. In recent years, Sukma has been a Maoist hotspot and this attack adds to the long list of casualties suffered by the forces. From 2014 to 2020 (March), more than 90 security personnel have been killed by the Maoist forces in the Sukma region. Earlier in May 2013, 27 people, including CRPF personnel and political leaders were killed by the CPI (Maoist) at Darbha Ghati in Sukma (NDTV, May 26, 2013).  Before that in April 2010, Maoist forces had killed 76 CRPF personnel in Tadmetla village of Sukma (India Today, April 06, 2010).

The recent attack raises some serious questions over the state’s preparedness to take on the Maoist forces. As the Maoist affected provinces, including Chhattisgarh, have been witnessing a downward trend in Maoist activities, perhaps the state forces have failed to decode the restructuring in the CPI (Maoist). The recent turn of events suggested that the change of guard that took place in CPI (Maoist), a couple of years back, is not being strategically followed by security forces. Amidst low scale of Maoist violence in recent years, none of the multiple actors involved in anti-Maoist operations gave heed to the fact that Maoists have been re-grouping for a long time now under their new General Secretary Basavaraj, who is highly trained in Guerrilla Warfare and Improvised Explosive Device (IEDs) and ambushes.

A close look at the timeline of Maoist attacks in and around Sukma points out towards an interesting Maoist formulation. Every year Maoists have orchestrated some of their deadly attacks in summer particularly between the months of March and June. This is no coincidence but is a part of the Tactical Counter Offensive Campaign (TCOS), launched by Maoists every year in summers to kill security personnel by catching them off the guard while they are out for area domination. The dry weather is a favourable period for carrying out ambushes in the vast jungle terrain and this has been pointed out by security analysts after every Maoist attack, but everyone prefers to ignore it until a next attack happens.

Intelligence failure is the primary reason in almost all the Maoist attacks including the recent Sukma attack. Soon after the incident, senior police officials revealed that the security personnel had received prior information about the substantial Maoist presence in the area. Following the information, forces were sent to fight them and were ambushed. Clearly, this is a case where the Maoists outnumbered the security forces in the gun battle. Obviously, the Maoists who led the ambush were not airdropped on a single day. Why did the security agencies fail to get information about their movement and gathering? Ironically, in 2017, the strategic technical command centre of the Unmanned Aerial Vehicles (UAVs), operated by the NTRO and CRPF was shifted to the Maoist heartland of Bastar in order to provide aerial surveillance to conduct anti-Maoist operations in the Maoist infested districts like Sukma and Dantewada (India Today, October 7, 2017).

This Maoist attack, which left 17 security personnel dead, has once again brought back the focus into the question of preparation, training, and strategy. The Commando Battalion for Resolute Action (CoBRA) which too was the part of this operation is, of course, efficiently trained for the purpose. But can the same be said about the heavily deployed CRPF personnel in the Maoist conflict zones of Chhattisgarh and elsewhere? Can the DRG and STF of Chhattisgarh Police match the standards of Andhra Pradesh’s Greyhound to carry on anti-Maoist operations? Those questions are important to ask because of the fact that this was a joint operation comprising of separate teams belonging to the DRG, STF, and CoBRA, who launched the operation from three sides.

The decades-old Maoist conflict is also adversely affecting the federal structure of the country. The state governments have pitiably become over-dependent on the Center on countering Maoism. Recently, Chhattisgarh got a new State government formed by Congress and it is necessary for both the Centre and the State to avoid all confusions on policy matters and work in close coordination to tackle the Maoist insurgency. After taking the oath, the new Chhattisgarh Chief Minister Bhupesh Baghel severely criticized the anti-Maoist strategies of the previous BJP government and declared that his government will devise a new strategy that will involve talks with people affected by Maoist activities (India Today, December 23, 2018).

Indeed, at this crucial juncture, any dialogue on the Maoist conflict must involve the strategic support of the Union government. On the security front instead of putting the onus of countering Maoism on the Central Paramilitary Forces, the State Police should be at the forefront. Combating Maoism shouldn't be considered a battle between the Centre and the Maoist cadre. Like most of the Maoist infested States, Chhattisgarh continues to suffer significant deficits in the strength and quality of the State Police Force, which actually is the first line of defence in such type of conflict.

CPI (Maoist) and its predecessors have always claimed that their philosophy is People-centric. But the timing of this recent Sukma ambush must serve as an eye-opener to all who still romanticize the idea of Maoism. The attack came at a time when people of this country irrespective of political, social, and religious differences have come together to deal with COVID-19 (Corona Virus) Pandemic and it itself speaks the truth about the relevance of Maoism in India. Although there is no exact information indicating any active plotting, CPI (Maoist) is probably seeking to exploit public fears associated with the spread of COVID-19 to incite violence, trap targets and promote their ideologies. With Basavaraj, heading the CPI (Maoist) and Hidma, in all likelihood becoming the next head of Central Military Commission; certainly, the Maoists are into a more dreaded role. Apart from his combat expertise, the tribal background of Hidma could be a headache for the security forces, as it is likely to be used by the Maoists to counter the State’s propaganda of ‘tribal cadres not being promoted to senior positions and are only used as foot soldiers.’

In a battle like this, nothing could be full-proof. But at the same time, the government must not lose its focus. The experienced Left Wing Extremism in India and elsewhere shows that the Maoist Movement proceeds in a zigzag and not in a straight manner. Small successes must not create room for complacency rather they should be transformed into big achievements. This is possible only when the policy-makers keep themselves updated with the missed lessons from the past along with the new changes taking place around the Maoist front.