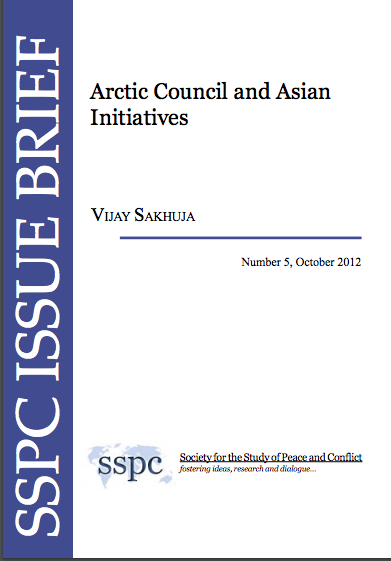 In September 2012, the Arctic ice shrunk to its lowest since its recordkeeping which started in 1979. It is believed that the Arctic could be ice-free during summers by 2030. The phenomenon has been attributed to global warming, an unprecedented release of heat-trapping methane gas, increasing commercial activity in the region, and growing human footprint.

There are concerns among the Arctic littoral states that have closely monitored the ongoing developments in the region. They have taken a number of proactive measures for the governance of the region through the Arctic Council to ensure that various scientific, environmental, commercial and human activities take place in a sustainable manner so as to preserve the pristine environment of the Arctic, to promote polar science, ensure peace and security in the region and work together towards a shared future. Several Asian states are aggressively jockeying for political influence in the Arctic region and making a strong bid to join the Arctic Council as a permanent observer. In the above context, this paper attempts to highlight the interest of a number of Asian countries in joining the Arctic Council. It begins by highlighting the evolution of the Arctic Council, membership issues and its working groups. The paper notes that Asian countries are eagerly waiting to join the Arctic Council and participate in the politico-strategic-economic dynamics of the region. The paper also examines the Indian narrative on the Arctic and argues that it is important to monitor the evolving developments in the Arctic region.