Cooperation or Competition with China in the Indian Ocean: An Indian Perspective 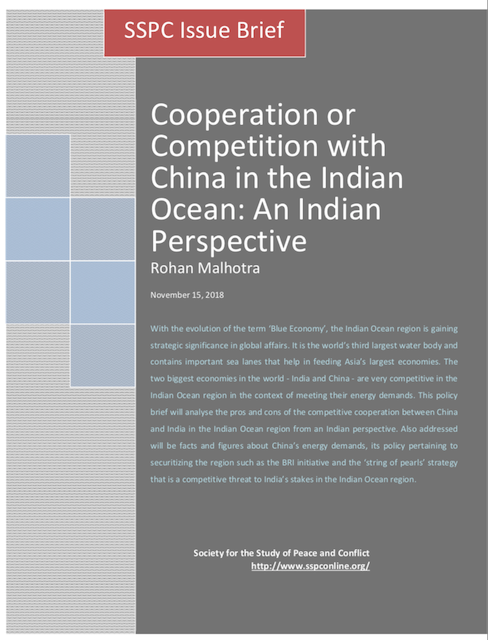 This policy paper will serve as an important source of knowledge for every person who would like to know about the strategic significance of the Indian Ocean region as a competitive advantage for two of the biggest Asian economies, India and China and how they counterbalance threats against each other. If India wants to emerge as a global player in the geopolitics of Asia, it needs to leverage its geographical location to its full advantage. The topic is relevant today because throughout history, India’s well-being and prosperity was linked to its access to the Indian Ocean region. Beijing claims that China’s increasing influence in the Indian Ocean region is only to safeguard its economic interests and purely commercially motivated. The research in this policy brief will critically analyse how India sees the increasing influence of China in this region as a threat to their security and sovereignty.

This policy paper is aimed at critically analysing the strategic competitive cooperation between India and China in the Indian Ocean region. The methods used for conducting research and reviewing the literature are from both primary and secondary sources. The scope of this study is not limited to scholarly articles on the topic but also includes chapters from the book National Security and Global Strategic Issues and secondary sources in the form of a guest talk discussing the strategic significance of the Indian Ocean by researchers and academicians, for example, the lecture by Prof. Baladas Ghoshal on the strategic significance of Indonesia in the region. Also referred was the bilateral talk with Dr. Gurpreet Khurana, Captain Indian Navy, in order to gain knowledge from an Indian perspective. Factsheets from various economic institutions were also taken into consideration for calculating the amount of trade value, the total number of ports and the total number of ships navigating through the region.

Thus, literature has been reviewed from both primary and secondary sources of data including research articles, news briefings, books, guest talks and seminars. The scope of the study is India-centric in order to explain the competitive cooperation with China in the region.

The Indian Ocean region contains substantial reserves of energy resources, particularly oil, coal and natural gas. It also acts as a transit zone for much of the world’s demands for energy resources. This brief refers to National Security and Global Strategic Issues, the book by Indian Police officer Dr. N.C. Asthana, and therefore the literature reviewed is India-centric and focuses on the strategic significance and cultural advantage of India compared to China in the Indian Ocean region ((IPS), 2016). Besides the wealth contained within it, the Indian Ocean is also critical to global trade, energy and food security. The Persian Gulf contains 65% of the world’s proven reserves and accounts for more than half the world’s oil exports and almost all of Asia- Pacific imports. Since most of the trade of the Indian Ocean littorals and the South Asian states is seaborne, a large volume of international long haul maritime cargo from the Persian Gulf, Africa and Europe transits through this region.

In the Indian Ocean region, the maritime port diplomacy has become significant in the geopolitics of the region. The Indian Ocean ports of Gwadar in Pakistan, Hambantota in Sri Lanka and Chittagong in Bangladesh have all benefited from Chinese investment and account for 30% of the global trade value (Reddy, 2016). Dynamics of India and China Relations by G.J. Reddy has talked about the strategic significance of the Indian Ocean region for extra regional forces such as the United States of America, Russia, Australia, and Japan. The literature has been reviewed in order to find out the roles of other states in the region. Almost all major substantial powers have deployed their militaries in the region, like the US fifth fleet, which is headquartered in Bahrain and uses the island of Diego Garcia as a major naval base and logistics hub for its Indian Ocean operational capabilities.

The Chinese are aggressively working towards building aircraft carriers and long-range nuclear submarines in order to securitize the region. China now imports approximately 60% of its oil from the Gulf. The greatest geographical impediment to expedient oil supply to China is the Strait of Malacca. Approximately 5000 Chinese cargo ships transit the region every year.

The main idea behind every literature available on the subject is the common consensus of the competitive advantage with China in order to increase its stakes in the region. The scope of my study and its relevance is to see how policy initiatives like BRI will lead to a competition with India in this region, and how India should tackle the Chinese ‘string of pearls’ strategy of making countries fall in their debt trap.

Officially, China maintains that its interests in the Indian Ocean region are strictly economic, but initiatives like BRI that consist of maritime belt linking of China to Europe through the Indian Ocean, the ‘string of pearls’ strategy, and the debt trap policy to acquire significant advantage in maritime port diplomacy gives away the real nature of its interests, which is to counter India and become a regional global power (Kwatra, 2018). The BRI will span across 68 countries and have serious implications on each of the participating states in matters of the public debt. 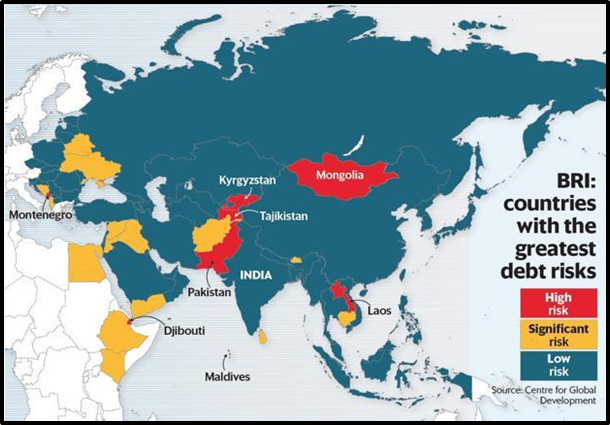 Figure 2.Risk ratio on the states participating in BRI (Kwatra, 2018).

The current existing policies will have implications on the states participating in the Belt and Road initiative by China, one of them being in the form of public debt. Figure 2 explains the three levels of risk of the debt trap policy by China:

There also exists a defence pact between China and Bangladesh that can be invoked to allow the use of the harbours at Chittagong. According to the ‘string of pearls’ theory, China is seeking to expand its influence by aggressively consolidating its presence through the acquisition and construction of military and naval facilities in order to improve relations with the Indian Ocean littoral states, thus isolating India and reducing the role of the USA in the region. The idea behind this strategy is that in a war-like situation, the land-based operational logistics and command and control infrastructure could provide logistics support to the Chinese maritime forces ((IPS), 2016).

After analysing the existing policies and their implications on every participating state in the region, here are some policy recommendations:

Thus, in order to counter China’s BRI and increasing influence in the Indian Ocean, the Indian Foreign Policy should be proactive and follow the principles of strategic autonomy in order to secure India’s economic interests and to further securitize the region.

China’s priority will always be to protect its energy security interests by way of securing the sea lanes of communication spreading from the Gulf to the South China Sea. India has to significantly increase its influence in the region to meet its own energy demands. There needs to be a competitive cooperation between India and China in order for them to meet their economic interests. Issues pertaining to the security of the region are piracy and disaster and relief procedures, and for that India and China have to work together. While it is difficult for China to gain maritime supremacy in the region against the Western navy in the foreseeable future, India should continue focusing on the Indo-Pacific characteristics in order to defend their stakes in the region, because for India the region is strategically significant. The need of the hour is to seek common shared interests, and for India and China to go for joint naval exercises in order to counter the threats from piracy, natural disasters, etc. China and India should cooperate on Indian Ocean governance issues and develop a competitive cooperation in order to address maritime issues better because rivalry will end up losing both countries their stakes and shared interests.

Albert, E. "Competition in the Indian Ocean", Council on Foreign Relations (May 2016): https://www.cfr.org/backgrounder/competition-indian-ocean