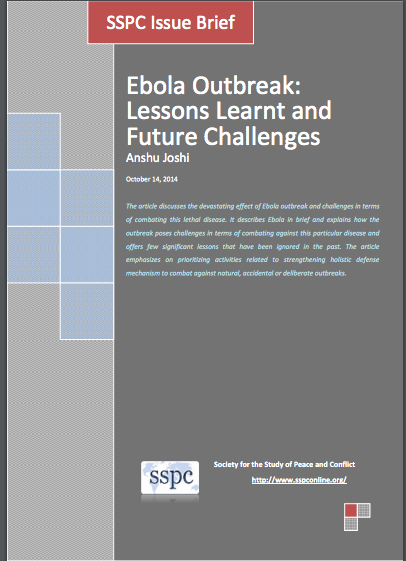 The article discusses the devastating effect of Ebola outbreak and challenges in terms of combating this lethal disease. It describes Ebola in brief and explains how the outbreak poses challenges in terms of combating against this particular disease and offers a few significant lessons that have been ignored in the past. The article emphasizes on prioritizing activities related to strengthening holistic defense mechanism to combat against natural, accidental or deliberate outbreaks.

After the devastating effect of Ebola virus across West Africa, where the death toll crossed few thousands within few months, the World Health Organization (WHO) declared Ebola epidemic an international health emergency.1 Ebola cases were first reported this year in Guinea in March, and later spread across the border to Liberia and Sierra Leone. The outbreak is the largest one recorded in world history till date, which has completely infected three African capitals.2 Professor Peter Piot, a Belgian microbiologist, presently the Director of the London School of Hygiene and Tropical Medicine was part of the team that discovered the Ebola virus in 1976, said in an interview that he never thought that ‘the virus would take this kind of dimension, turning from a small outbreak into a horrifying humanitarian crisis. 3 In addition, with each passing day, fresh reports related to the spread of this deadly virus is appearing in the media, including in India. Fortunately, the two suspected cases of Ebola have turned out as negative in India; however, the possibility of future outbreak cannot be totally ruled out.