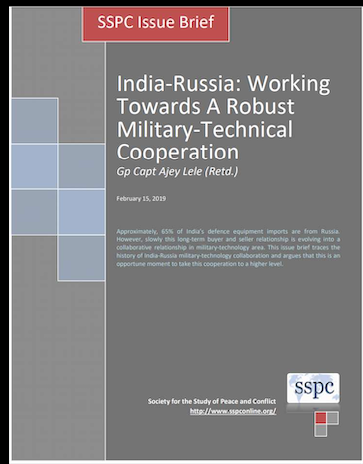 Global security architecture has undergone a tremendous shift since the First World War. However, the one thing that has dominated the evolution of security structures since that time has been the importance of technological advances. It is important to note that the shifting power balance that exists between nations today has major dependence on technological revolutions. In fact, over the years, growth in science and technological innovations has mostly happened due to the demands of the military and armed forces influencing and assisting the stimulation of science and technology.

Post-independence (1947), India initiated reforms to promote science and technology for the overall development of the state. Similarly, Indian armed forces ensured the introduction of various modern weapon systems to strengthen their defence architecture. The equipment available with the Indian army immediately after independence was of British origin. For the first decade after independence, Indian army was mostly dependant on Britain, and to some extent France, for the induction of new defence equipment.

Post the Sino-Indian border conflict (1962), India established military cooperation with the Soviet Union. Interestingly, however, the development of the Indo-Soviet military relationship had actually begun in the year 1955, when India was presented with two I1-14 transport aircrafts. During the next five to seven years, India bought 24 Ilyushin 14s, ten Mi-4 helicopters, eight An- Antonov 12 transport aircrafts, and six jet engines (HF-24 aircraft). The initial period of this relationship was limited to arms and equipment purchase by India rather than any major technological cooperation. The period after 1964 could be credited with bringing more maturity to this defence relationship, when the first batch of six MiG 21 fighter aircrafts was delivered to India. Subsequently, India was also provided with the technical aid and machinery to establish manufacturing facilities for this aircraft. This instance can be seen as the beginning of a technological collaboration between these two states, which not only flourished during the Soviet era but continues with present day Russia too.[1]

Russian Defence Minister Sergei Shoigu visited India in the second week of December, in 2018. During this visit, he clearly articulated the level of cooperation between India and Russia in the field of military technology. He mentioned that this cooperation is ‘unprecedented’ and Moscow is ready to develop long-term military and technical cooperation with Delhi.[2] This statement by the Russian defence minister speaks volumes about the present and future of the Indo-Russian relationship. Over the years, this relationship has built up mutual trust and a healthy friendship. Both states value their relationship significantly, and have stayed together through thick and thin. The Russian defence minister also emphasized that "no other state cooperates with India in the sphere of transfer of armament and military hardware production technologies as Russia does."

Defence Minister Sergei Shoigu was in India to attend the 18th meeting of the India-Russia Inter-Governmental Commission on Military Technical Cooperation (IRIGC-MTC).[3] This is the top-level institution for reviewing and guiding the overall military-technical cooperation between the two countries, and is jointly headed by the Deputy Prime Minister of Russia and the Defence Minister of India. This group was established in 2000, and has two Working Groups and seven Sub-Groups which review and discuss a range of military-technical issues. Eight years after this group was established for the speedy execution of various projects, a High-Level Monitoring Committee (HLMC) was set up with the Defence Secretary of India and the Director of Federal Service for Military Technical Cooperation (FSMTC) from the Russian Federation as its co-chairs. During the December 2018 meeting, nearly a decade after the constitution of the monitoring committee, it was decided that the existing IRIGC-MTC will be restructured to form the IRIGC on Military and Military Technical Cooperation. This has been done to enhance the military-to-military engagement and rationalise the functioning of the Commission. An additional institutional Working Group will also be set up under the expanded Commission, which will be headed by the Chief of Integrated Defence Staff to the Chairman COSE (CISC) and the Deputy Chief of the Main Operational Directorate of General Staff of the Armed Forces of the Russian Federation.

India’s security challenges are diverse in nature. Both its adversaries with whom it shares land and sea borders are nuclear weapon states, and at the same time, India is also facing the threat of cross-border terrorism. The country needs to ensure that its armed forces are always prepared to address any security exigency. This is why India is a major importer of Russia’s military equipment, with imports exceeding 60 per cent. On top of this, India is required to ensure that its military equipment and platforms are fully functional. For this purpose, it is using IRIGC-MTC’s forum to relay to the Russian authorities the need for a robust and reliable after-sales support mechanism with regards to the serviceability of Russian-origin equipment. Additionally, it has also been felt that in order to save time and ensure speedy availability of certain necessary components, manufacturing them locally is important. Moreover, India should also be capable of servicing its military platforms and equipment locally. In order to achieve this, India has highlighted the need for Russia to adopt a liberal approach with regards to the transfer of technology for manufacturing components of major defence platforms so that it can be ensured that these platforms always maintain operational readiness. Russia has positively responded to India’s request and has decided to facilitate joint manufacturing of components with India under the ‘Make in India’ initiative. This military-technical cooperation has evolved purely from a buyer-seller association to a joint research and development initiative. Today, India is undertaking both production and servicing of certain new military platforms. However, there is still a need to advance and strengthen the military-technical cooperation in the sphere of research and development, production, servicing and after-sales support of weapon systems and platforms.

Currently, various bilateral projects with Russia are progressing well. These include indigenous production of T-90 tanks and Su-30-MKI aircraft, supply of MiG-29-K aircraft and Kamov-31 and Mi-17 helicopters, upgrade of MiG-29 aircraft and supply of Multi-Barrel Rocket Launcher Smerch. Also, there is a possibility that AK-103 assault rifles will be produced at Indian facilities. Broadly, there is clarity between agencies of both the states regarding the approach they need to adopt to enhance this partnership. Agencies from both the states have already successfully undertaken the development of one of the most-discussed missile systems globally - BrahMos. This joint venture between the Russian Federation's NPO Mashinostroyeniya and India's Defence Research and Development Organisation (DRDO), which have already developed the BrahMos Aerospace together, is currently in the middle of producing one of the fastest cruise missiles in the world.[4] The ship-based version of this missile was inducted in the Indian Navy in 2005. The Indian army has also established three regiments of this missile, with the air-launch version witnessing a successful test during 2017.

Time is ripe for this mature relationship to make further progress. Both the countries have decided to "upgrade and intensify" this cooperation through joint manufacture, co-production and co-development of key military hardware and equipment.  It is important for India and Russia to remember that if they want to take their “special privileged strategic partnership” to the next level, they need to diversify. As modern day warfare undergoes changes in concepts and methods of warfighting, it will not just be limited to tanks, guns, missiles and aircraft. In addition to the conventional form of warfare (in some cases, nuclear), states need to prepare themselves for a range of other forms of warfare including asymmetric, hybrid, cyber and space. It is becoming obvious that modern technology is close to reshaping the methods of warfighting. Hence, it is important for India and Russia to expand their military-technology cooperation to address these emerging challenges too.

The new methods of warfare blur the lines between war and peace. New technologies are dissolving the difference between civilian and military technologies. With the Fourth Industrial Revolution in place, militaries are required to factor in the technological upheavals happening under what is commonly referred to as the Industry 4.0. Russian President Putin rightly said during 2017, “the leader in artificial intelligence (AI) will rule the world.” Today, the ongoing Fourth Industrial Revolution is all about AI, robotics, internet of things (IoT), big data, blockchain, 3D printing, nanotechnology, materials science, energy storage, biotechnology, genetic editing and supercomputing, and quantum computing. All these technologies have various defence utilities and potential to cause major military-technological disruption.

To address these new sets of challenges and opportunities in a cost-effective way, India and Russia could use some of the existing functioning structures of their bilateral arrangements to make progress towards developing dual-use technologies. [5]

India-Russia Science and Technology Centre and India-Russia Network of Universities (RIN) could be given, based on their strengths, specific projects  for studying some of the technologies mentioned above. Subsequently, IRIGC-MTC could build on their work and modify it according to changing requirements. Russia has significant expertise in the field of robotics, which could be extrapolated for military requirements. Russia’s nuclear energy corporation, Rosatom, is in advanced stages of implementing a plan to develop advanced metal-additive manufacturing technology by producing 3D printed parts for the country’s nuclear industry. This agency is already involved with the development of wind energy and hydropower projects in India. Their expertise in 3D printing could be an added advantage for defence research agencies. Successes achieved in the 3D printing arena are expected to revolutionise military logistics in a big way. SREI Infrastructure Finance Ltd., a company based in the Indian city of Kolkata, is expected to enter into energy business with Russia. SREI has also set up a $200 million IT and innovation fund in partnership with the Russian state lender, Vnesheconombank, to promote collaboration in the fields of artificial intelligence, 3D printing, and robotics. The first investment deals are expected to roll in in the beginning of 2019.[6] It is important that IRIGC-MTC also remains in loop.

The Russian government’s National Technology Initiative (2017) has a goal of bringing Russia’s share of the global market of “Industry 4.0” compliant services to at least 1.5 per cent. Their focus is expected to be towards developing digital design and simulation, new materials, additive technologies (3D printing), industrial internet and robototronics. All these sectors are expected to find utility in the defence domain too.

This is the opportune moment to take the military-technical cooperation between India and Russia to a higher level. This could follow a two-pronged approach: one, they could continue working on present and proposed projects while expanding their scope as required, and two, they could start jointly working on an evolving technology spectrum.  The strengths of state controlled as well as the private industries of both the states need to be exploited for this purpose. Developing military technologies together could help shorten the otherwise lengthy process of development and innovation. This could be an opportunity for both India and Russia to develop their military industrial complex together.