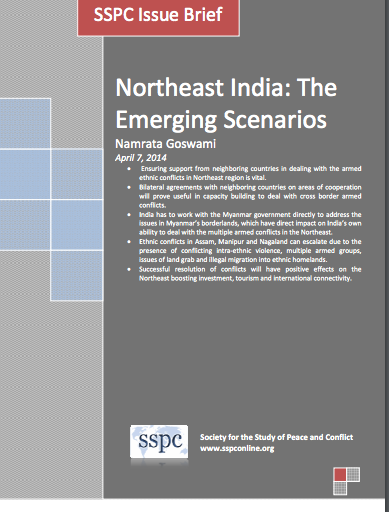 Ensuring support from neighboring countries in dealing with the armed ethnic conflicts in Northeast region is vital. Bilateral agreements with neighboring countries on areas of cooperation will prove useful in capacity building to deal with cross border armed conflicts. India has to work with the Myanmar government directly to address the issues in Myanmar’s borderlands, which have direct impact on India’s own ability to deal with the multiple armed conflicts in the Northeast. Ethnic conflicts in Assam, Manipur and Nagaland can escalate due to the presence of conflicting intra-ethnic violence, multiple armed groups, issues of land grab and illegal migration into ethnic homelands. Successful resolution of conflicts will have positive effects on the Northeast boosting investment, tourism and international connectivity.

Of late, the Northeast India has emerged as one of the most strategic regions in this part of the world. In today’s age of globalization and trans-border connectivity, the Northeast is fast emerging as the potential gateway for India to Southeast and East Asia through Myanmar. There is increased focus on it through mechanisms such as the Delhi Dialogue involving the Association of Southeast Asian Nations (ASEAN). Countries such as Japan, Vietnam, Thailand, Malaysia, Singapore, etc, have shown increasing interests in investing on the infrastructure development in the Northeast. The political reform process under way in Myanmar with greater focus on democratization has brought in the US as an important stakeholder right up to Northeast India’s doorsteps.1 China’s presence in Myanmar and its territorial claim over Arunachal Pradesh too has brought this region to a larger geo-political chessboard. How the dynamic of this region will emerge in the next few decades will have major strategic implications for India and the Southeast Asia at large. In analyzing the emerging scenarios for Northeast India, four drivers play important role -- of its history; ethnic conflicts; how the Indian state manages/resolves these conflicts; and finally, the external dimension of the armed ethnic conflicts.

Author Note
Dr. Namrata Goswami is Research Fellow at the Institute for Defence Studies and Analyses (IDSA), New Delhi. She has been Senior Fellow at the United States Institute of Peace (USIP), Washington, D.C. and Fulbright-Nehru Senior Fellow in 2012-2013. The views expressed here are solely that of the author.