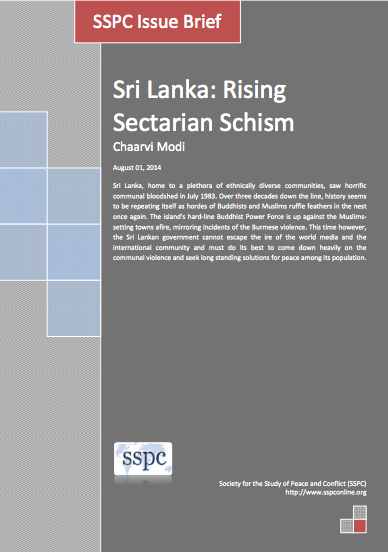 Sri Lanka, home to a plethora of ethnically diverse communities, saw horrific communal bloodshed in July 1983. Over three decades down the line, history seems to be repeating itself as hordes of Buddhists and Muslims ruffle feathers in the nest once again. The island's hard-line Buddhist Power Force is up against the Muslims- setting towns afire, mirroring incidents of the Burmese violence. This time however, the Sri Lankan government cannot escape the ire of the world media and the international community and must do its best to come down heavily on the communal violence and seek long standing solutions for peace among its population.

Violence continues to rage in South Asia against Muslims even now, as the Buddhists ride through streets of Burma shouting anti-Muslim slogans. This incidence came to light after a Muslim man was beaten severely on his way to morning prayers.17 Likewise violence in Sri Lanka does not appear to be nearing any peaceful settlement either. The recent anti-Muslim riots have got the al-Qaeda interested in the region. This will neither be welcomed by the governments of Burma or Sri Lanka, or the Buddhist populations settled in these countries. 18 It is noteworthy that local elections are due in Sri Lanka next month and the government will have to act quickly to be able to make this election free and fair. The fate of peace and mutual co-existence of the diverse communities of Sri Lanka is at stake and this time the world community and the human rights groups are watching closely to see how this South Asian nation with a promising potential for prosperity handles the situation at hand.

Author Note
Chaarvi Modi is a researcher at the School of Liberal Studies, Pandit Deendayal Petroleum University, Gandhinagar (Gujarat). She is pursuing Liberal Studies with a Major in International Relations and Minor in Public Administration. She has written for the Journal of Politics and Governance (December 2013), Mauritius Times (August 2013) and Foreign Policy Research Centre (July 2014), among other websites and journals. Her areas of interest are Indian governance, international politics, energy security and conflict.