Renewing the Pledge to Protect our Cultural Properties and Heritage 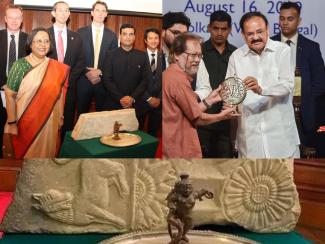 On August 15 (2019) a news report emerged that two artifacts were stolen in the past, a lime stone-carved relief sculpture and a Krishna bronze sculpture, were returned to India. More than 30 such artifacts have been returned to India in the last five years as an act of repatriation of objects of cultural importance. Although this is good news, much needs to be achieved in the field of protecting India’s valuable artworks, which have become the victim of malicious design of international smugglers who are earning huge returns from such illegal trade. Recently,  the Vice President of India urged both governmental and non-governmental organisations to work together and take up the task of preserving the tangible and intangible cultural heritage of the country. This must be taken up with utmost sincerity.

Art and antiquity theft is a significant problem not only in India but across the globe. According to the Global Financial Integrity report (2017), illicit trade in cultural property, listed as a separate category under transnational crime, represents 20 percent of all art crime and generates an estimated $1.2 billion to $1.6 billion in illicit. According to this report, this criminal market covers a range of illegal activities, including the theft of cultural property from museums, the illicit excavation and looting of archaeological sites, and the use of faked or forged documentation to enable both illegal import and export as well as illicit transfers in ownership.[1]

The increasing numbers of thefts of art objects leading to illicit trafficking at national and international levels have awakened museum authorities around the world. The growing disregard for cultural heritage and steeping rate of stolen antiquities results into a significant increase in the cases of pilferage and illicit trade. Since the gap in the ratio of demand and supply of artefacts is rather too large, along with the museums, equally vulnerable are the art objects from the excavated sites, monuments, religious sites and art galleries.

The news of four masked men breaking into the Museum of East Asian Art in Bath (UK), stealing gold and jade artifacts at the wee hours of April 17, 2018, came as a shocker.  A similar crime was reported at the beginning of 2018 where thieves reportedly deactivated a sophisticated security system and decamped with the antiquities from Doge’s Palace in Venice (Italy). What is even appalling is that this incident took place in broad daylight as soon as the Museum opened on the last day of the exhibition of “Treasures of the Mughals and Maharajas”.

Back home in India, similar incidences of theft in museums and temples and trafficking of precious cultural properties occur in regular intervals, often overlooked by investigating agencies as isolated petty burglaries. In November 2017 around 15 textiles pieces were stolen from the National Handicrafts and Handlooms Museum in Delhi. In September 2018 a three-tiered golden tiffin box went missing from the Nizam Museum in Hyderabad. These incidents though surprised many, also puts a question mark on the security arrangements in place for such well-kept Museums. A swift police investigation, however, cracked both the cases.

But not all theft cases meet with such desirable results. As per the statistics reported in 2016 in Crimes in India published by the National Crimes Records Bureau (NCRB), out of 1413 cases in the stolen cultural property only 330 cases were solved. [2] The Archaeological Survey of India ( ASI) is one of the largest repositories of antiquities in India, being responsible for security and display of its antiquities. The report of the Comptroller and Auditor General of India on the performance audit on the Preservation and Conservation of Monuments and Antiquities (2013) suggests that 131 antiquities from monuments/sites and 37 antiquities from Site Museums of ASI were found to have been stolen from 1981 to 2012. [3] And this is ongoing even when India is a signatory to 1970 UNESCO convention on the means of prohibiting and preventing the illicit import, export and transfer of ownership of cultural property and 1995 UNIDROIT Convention on the International return of stolen or illegally exported cultural objects.

There are various motivations behind the theft of art. It could be for ransom, where museums offer rewards to claim the objects back, or to gather funds for war or terror activities or simply for obtaining instant cash, for example the sanitation workers at Teen Murti Bhawan in New Delhi burgled an object to repay their loans. All these cases have one thing in common: the money factor attached to the object.

A close observation of most of the cases of art theft in museums around the world determines a pattern that all the perpetrators were well informed or familiar with the security system and layout of the museums.  Mostly museums tighten their security only after such kinds of cases come into the limelight, including the CCTV activation and security alarm system. Most of the times losses are not reported as the description of objects are not adequate and sometimes the photographs are also missing to tally. Hence the stolen object easily enters the legitimate stream of trade.

The Indian Treasure Trove Act was passed in 1878 to protect and preserve art treasures having archaeological and historical value. Likewise, the Antiquities and Art Treasures (AAT) Act was passed in 1972 for effective control of the moveable cultural property, consisting of antiquities and art treasures. The AAT Act was followed by AAT Rules 1973 which were enforceable with effect since 1976. However, some shortcomings have been noticed in these Acts which have in fact facilitated illegal trade and smuggling of antiquities and art treasures like the definition of antiquities should be revisited to include items which have so far been left out. The provision for import of antiquities should be clearly spelt out. In some of the theft cases, it has been found that the replicas have replaced the original statues. The criteria for making replicas should be discouraged or certain restrictions should be adhered to.

While working on the necessary amendments to the existing Acts and building an inventory of antiquities, efforts should be taken to include some proactive measures for retrieving antique objects like checking of catalogs of international auction houses, taking up the case with the International Art Loss Registry and issuing alerts in public forums on such theft cases. Publicizing a theft can cause a reduction in the value of stolen works besides carrying too many risks while selling the same.

The ASI is the nodal agency to retrieve stolen or illegally exported art objects, but the antiquities recovered since 1976 are still well under touching three digits. Some websites like India Pride project and Plundered Past facilitates in recovering the cases by sharing information about stolen artefacts and their details in museums and auction catalogues around the world.

Moreover, vigilant people of a country are the best safeguard against the loss of cultural property.  While the government does its job, we as responsible citizens should also do our bit as laid out in Part IV (A) of Indian Constitution dealing with fundamental duties that states,  ‘It shall be the duty of every citizen of India to value and preserve the rich heritage of our composite culture.’

[1] Channing May, Transnational Crime and the Developing World, March 2017, https://www.gfintegrity.org/wp-content/uploads/2017/03/Transnational_Cr…

[3]  “Report of the Comptroller and Auditor General of India on Performance Audit Of Preservation And Conservation Of Monuments And Antiquities”, 2013, https://cag.gov.in/sites/default/files/audit_report_files/Union_Perform…

Author Note
Deeti Ranjita Ray, Senior Fellow (2019-2021) with the Ministry of Culture, Government of India, has been presently engaged in the study of the management of cultural heritage of Odisha. She has worked with the Delhi based cultural organisations including Indian Council for Cultural Relation (ICCR), the Aga Khan Trust for Culture (AKTC), Indian National Trust for Art and Cultural Heritage (INTACH) and Sanskriti Foundation. With M.Phil in Ancient Indian History and Diploma in Heritage Management, her areas of expertise are research, documentation, and management of intangible heritage especially Folk tradition.