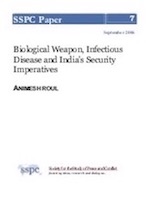 The deliberate germ attack unleashed against the most powerful country in the world, the United States in late 2001, made us believe that the threat of the 21st century would be human-induced disease outbreaks. Human-induced or not, the subsequent SARS (Severe Acute Respiratory Syndrome) and Bird flu outbreaks underscored that infectious disease holds the real threat to humanity in the coming years. The situation would arise due to many factors, such as environmental pollution, overpopulation and excessive human interference in the natural process of life. A substantial portion of the threat also constitutes the misuse and abuse of naturally occurring organisms (biological agents or pathogens) for hostile purposes by humankind in general and terrorists (non-state actors) in particular. Again, these situations will be involving Nations into a ‘molecular arms race’ consist of the development and stockpiling arsenals of measures and countermeasures against the new and emerging diseases.

This paper seeks to discuss issues related to the infectious diseases in India, natural and deliberate (use of pathogen) while examining the nature of threat perceptions for India. Also the paper would delve into existing scenario regarding different aspects of deliberate disease spread such as through bio-warfare, bio-terrorism and biological agent use against agriculture in the region.