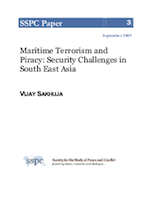 The security environment in South East Asia is being challenged from several directions. The region is plagued with piracy, and has also witnessed maritime terrorism-related activities, drug smuggling, gun running and illegal migration. Some of these have the potential to disrupt and destroy maritime enterprise. Efforts have been made by regional countries to address these problems and there has been an encouraging response to their efforts to combat disorder at sea. Nevertheless, concerns with threats of maritime terrorism in the region remain high primarily due to the rise of Islamic fundamentalism in the region, presence of al Qaeda - linked groups like Jemaah Islamiah (JI), and the importance of the strategic choke points comprising the Malacca, Sunda and Lombok Straits. Besides, there is also a noticeable link between threats of terrorism with the increasing incidents of sea robbery attacks on maritime shipping in the Straits.