Toxic - A History of Nerve Agents, From Nazi Germany to Putin’s Russia 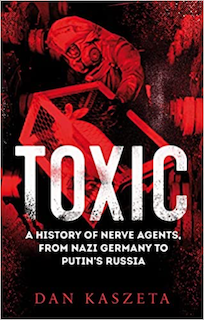 Dan Kaszeta’s book traces the journey of nerve agents from their initial discovery in WW-II era Germany to their eventual spread around the world. The author explores their chronological development while deep-diving into specific chemical weapons programs on a topical basis. The book begins with the prologue explaining the use of the Calabar bean as a method to determine guilt in judicial proceedings in West Africa during the mid-1800s. The effects of the bean as a judicial tool were equivalent to that of Russian roulette, but biologically speaking, they led to the first descriptions of what would come to be known as nerve agent poisoning.

The author Dan Kaszeta is a veteran of the US Army Reserve’s Chemical Corp. After the Tokyo Subway attacks in 1995, he also took up the post of Disaster Preparedness Advisor at the White House Military Office. He has involved in the aftermath of 9/11 and the Anthrax attacks that followed and was heavily involved with the US Secret Service. Since 2011, he has been an independent security consultant and author. His experience and knowledge in the domain of Global WMD issues allow for compelling reading.

The book begins in Depression-era Germany, where Dr Gerhard Schrader discovered the first nerve agent while researching organophosphate compounds. His work was based on adding an already poisonous substance (cyanide) to an organophosphate compound to create a highly effective pesticide. This new substance would come to be known as Tabun (‘Taboo’ in German) and would quickly be brought to the attention of the Nazi industrial war machine.

The author traces the journey of the nerve agents from their discovery in Dr Gerhards Schrader’s experiments with pesticides to their eventual development of Sarin, Tabun, and Soman as chemical weapons. An entire chapter has been dedicated to industrialist Otto Ambros and his role in bringing nerve agents from a laboratory setting to a viable chemical weapon that could be produced on an industrial scale in wartime Germany.

The author also explores the possible reasons why Germany was willing to spend dwindling wartime funds on developing and producing chemical weapons that would not be used, even when the Allies were closing in on Berlin. After the war, the Allies were quick to recognize the potential of nerve agents and began efforts to produce their own. Efforts to dispose of German stockpiles and build their weapons stockpiles started immediately after the war.

Operations Paperclip and Dustbin proved to be pivotal in absorbing the German knowledge and personnel into the US and UK weapons programs. By absorbing the scientists responsible for the German industrial war machine, US and UK gained a significant lead over the Soviets in the developing Cold War. Similar efforts were also undertaken by the Soviets, who were also thinking along the same lines. This also laid the foundations for the Cold War production of nerve agents and the discovery of VX by British scientists.

The author delves deep into the Cold War-era production of nerve agents undertaken by both the US and the USSR. Special attention is paid to how each side recovered the technical know-how of production from the Germans and the challenges they faced in replicating the capabilities of the German chemical weapons programs and surpassing them.

The years 1950-70 were the most productive for the US. They had access to German scientists possessing technical knowledge and access to entire infrastructure for nerve agent production in West Germany. In comparison, the Soviets were forced to largely reverse-engineer the same on a longer timescale. The ’70s saw a shift in the perception of WMDs, primarily chemical and biological weapons. The US government voluntarily suspended their nerve agent production and forced the existing infrastructure to hibernate. The technical focus for chemical weapons development was shifted from testing to development. This would give rise to binary agents for already existing nerve agents.

Meanwhile, the Soviets had discovered a new subdivision of new nerve agents that came to be known as ‘Novichoks’. The nerve agent was intentionally kept a secret as it was the perfect covert weapon because nobody in the greater international community had any idea it existed. Thus, it could evade the law since it was not technically illegal to manufacture or use. The OPCW was established in the 90s, and the Novichoks were kept hidden from them for the next two decades.

The war between Iraq and Iran in the 80s also saw rampant use of nerve agents and chemical weapons like mustard gas. From this point onwards in the book, the focus on the technical challenges of production is reduced, and more attention is given to who did what during each event. The attacks on Iranians by Sarin, Cyclosarin, and Mustard gas are covered in the book and a general overview of the conflict. The author also covers the first Gulf war and the Iraq invasion of 2003 from the perspective of nerve agents and creates a coherent narrative despite the fog of war. The author also covers the Syrian conflict, where the primary focus is not on the war itself but the role of nerve agents and the reactions invoked by their use. These chapters are a demonstration of the capabilities and use of nerve agents in wars.

The Tokyo Subway attacks are presented as a unique incidence where a non-state actor successfully used Sarin on two separate instances. The book provides relevant context and a thorough narrative of events that led to the attack and its conclusion. Since these were executed in a civilian setting, the author has more factual data to cover. Similarly, the assassination of Kim Jong Nam and the attempted assassinations of the Skripals in Salisbury are explored through the lens of the use of nerve agents in the context of assassinations.

The author also takes time to explore the psychological effects of nerve agents on victims. Conventional medical treatments focus on using atropine to manage the immediate symptoms, but the author explores the long-term damage caused by nerve agent exposure. US Army veteran Michael Yandell was exposed to Sarin during his tour of Iraq in 2004. The author interviewed him and presented his example as a case study for why the psychological effects of nerve agent exposure need to be studied.

The technical aspects of chemical weapons are presented in an understandable way to someone new to the field while still being detailed enough to explain the challenges accurately. The author also provides a comprehensive understanding of nerve agents that is demonstrated not only in the bibliography of the book but also through the two appendices attached at the end of the book. These appendices explain the technical aspects of nerve agents and chemical weapons in a way that provides the necessary context to novices to the domain. The second appendix provides an overview of the various chemical weapons programs worldwide that were not covered in the book.

This book is a must-read for gaining a comprehensive understanding of the history and technical aspects of nerve agents.

Reviewed by: Nachiket Kondhalkar is a Biomedical Engineering graduate from Mumbai University (2020). He recently completed a PG diploma in CBRN and National Security from the Department of Defence and Strategic Studies at Savitribai Phule Pune University (2021).