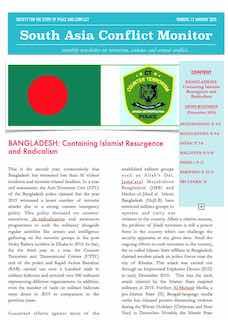 This is the second year, consecutively that Bangladesh has witnessed less than 50 violent incidents and terrorist-related fatalities. In a year-end assessment, the Anti-Terrorism Unit (ATU) of the Bangladesh police claimed that the year 2019 witnessed a lesser number of terrorist attacks due to a strong counter-insurgency policy. This policy focussed on counter-narratives, de-radicalization and awareness programmes to curb the militancy alongside regular activities like arrests and intelligence gathering on the terrorist groups in the post Holey Bakery incident in Dhaka in 2016. In fact, for the third year in a row, the Counter Terrorism and Transnational Crimes (CTTC) unit of the police and Rapid Action Battalion (RAB) carried out over a hundred raids in militant hideouts and arrested over 300 militants representing different organizations. In addition, even the number of raids on militant hideouts went down in 2019 in comparison to the previous years.

Concerted efforts against most of the established militant groups such as Allah’r Dal, Jama'atul Mujahideen Bangladesh (JMB) and Harkat-ul-Jihad-al Islami Bangladesh (HuJI-B) have restricted militant groups to operate and carry out violence in the country. Albeit a relative success, the problem of jihadi terrorism is still a potent force in the country which can challenge the security apparatus at any given time. Amid the ongoing efforts to curb terrorism in the country, the so-called Islamic State affiliate in Bangladesh claimed another attack on police forces near the city of Khulna. This attack was carried out through an Improvised Explosive Device (IED) in early December 2019.  This was the sixth attack claimed by the Islamic State-inspired militants in 2019. Further, Al-Munasir Media, a pro-Islamic State (IS) Bengali-language media outlet has released posters threatening violence during the Winter Holidays (Christmas and New Year) in December. Notably, the Islamic State-inspired militants (e.g. Neo-JMB) resumed attacks in the country in April 2019 following a two-year gap in their jihadi operation.

The elite Counter-Terrorism and Transnational Crime (CTTC) unit underscored the persistent threat of radicalization (both virtual and physical) which is undoubtedly on the rise in the country. It is clear that this threat will remain a headache for the government and security agencies. As per CTTC research, the notorious ‘Dawahilallah Forum’, online propaganda forum affiliated with Al Qaeda and Ansarullah Bangla Team, has increased its member base from 550 to 3,000 in the last few months. Alarmingly, CTTC’s research also noted that 82 percent of the terrorists use social media, and 56 percent of the terror suspects were university graduates. The research broadly proved how new age militant elements resort to internet and novel technologies to push their subversive activities and agenda.

However, in a change of tactic, the security agencies gave emphasis on counter-narratives, de-radicalization and awareness programmes to curb the militancy alongside regular activities. This fresh perspective has helped the country tackle the radicalisation problem. Md Moniruzzaman,  a deputy inspector general (intelligence) of the newly formed ATU, said, “Alongside regular activities, we are now embracing a soft approach, trying to change the mind-set of the radicalized faction and taking up programs which raise motivation and awareness. Also, we are working on long-term capacity building and institutional skills development.” The objective of this approach is to nip the threat at the bud and not to allow the militants to consolidate and expand.

The following are the reasons for successful counter-insurgency operations in Bangladesh.

Firstly, the success is due to strong intelligence and frequent action against radical groups and most importantly the police-adopted soft approach side-lining the earlier chosen coercive methods. As a result, these radical groups did not get any space to expand their network and indoctrination programs. The terrorist attack at Holey Bakery in Dhaka in 2016 was the game changer and Bangladesh has shown resolve against any kind of terrorism since then.

Secondly, the strong political willpower to fight against radicalism complemented by the re-election of the Awami League (AL) under Sheikh Hasina that motivated the security agencies to take resolute action. During her election campaign, she reiterated her determination to take strong action against all forms of terrorism and violent extremism. In fact, she emphasised that Bangladesh would not allow its territory to be used by any terrorist, terrorist group or entity against any state or people including India. On the contrary, earlier, the BNP government under the leadership Khalida Zia adopted softer approach towards the radical groups by not allowing the security agencies to take action freely. Therefore, re-election of Sheikh Hasina, in  to power in December 2018 embolden the morals of security agencies.

Thirdly, Bangladesh-India cooperation on counter insurgency and intelligence sharing was a huge positive enforcer in this endeavour. Both the countries vowed to adopt zero tolerance to terrorism and violent extremism, and agreed that a strong security partnership must build trust and mutual confidence between the two neighbours. The same was reiterated in September 2019, while both Prime Ministers met on the side-lines of the High Level Segment of the 74th session of the UN General Assembly.

Fourth, Bangladesh also took help from Myanmar to control radicalism in the bordering regions. Despite having differences over the Rohingya refugees’ issue, both the countries agreed on cooperating when it came to dealing with cross-border anti-drug measures and terrorism. The decision was taken at a recently held high-level bilateral border conference in Dhaka between the two countries. This step would certainly further contain radicalism and terrorism in Bangladesh since terrorist activities are found at the borders.

This article was featured in the "South Asia Conflict Monitor, January 2020"