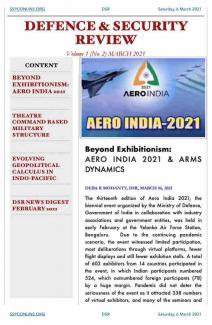 The thirteenth edition of Aero India 2021, the biennial event organized by the Ministry of Defence, Government of India in collaboration with industry associations and government entities, was held in early February at the Yelanka Air Force Station, Bengaluru. Due to the continuing pandemic scenario, the event witnessed limited participation, most deliberations through virtual platforms, fewer flight displays and still fewer exhibition stalls. A total of 602 exhibitors from 14 countries participated in the event, in which Indian participants numbered 524, which outnumbered foreign participants (78) by a huge margin. Pandemic did not deter the seriousness of the event as it attracted 338 numbers of virtual exhibitors, and many of the seminars and conferences were held online.

The Indian Defence Minister Rajnath Singh inaugurated the event, and delegates and dignitaries from 44 countries participated in this year’s Aero India. The previous edition had attracted more than 600 Indian companies and 200 plus foreign companies. In terms of flight demonstrations, company exhibition halls, business-to-business chalets, number of seminar deliberations and media interactions between the government, companies and customers, the latest edition was visibly smaller than the previous editions' pump and glitter. The theme of the show was 'conceive, indigenize, collaborate'. It denoted efforts toward domestic innovation and indigenous military-industrial prowess, thus making India more self-reliant. It also reflected the national urge for collaborative efforts with willing foreign manufacturers on mutually agreed terms, thus boosting local capabilities.

From a larger strategic-commercial prism, the event may have attracted less participation but was significant for several reasons. First, the message from the Indian government was apparent – demonstration of its indigenous platforms, including Tajas fighters and indigenous variants of helicopters aimed at meeting domestic needs and aim for exports to interested customers. If the Indian armed forces' relatively large orders for products like Tejas fighters (both Mark I and Mark IA) or Arjun Mark 1A main battle tanks are of any indication, this strategic move to use these products forces will propel interests in potential customers for exports. Gone are the days when India was constrained to sell weapons to countries for politico-ideological reasons. At best, what India used to do was to gift some of these systems as gifts to friendly countries. The current government's intents are clear – shed ideological baggage, make the domestic military-industrial and scientific ecosystem be a part of the global supply chain from maintenance to sub-systems to complete systems production and sales, which would not only make the industry be treated as a real national strategic asset but more importantly bring in financial dividends and lessen import dependency significantly. For far too many decades, India has been practically dubbed as a 'weapons merchants' paradise'. Both Aero India and Def Expo (for land and naval systems exhibition) now attempt to be business-oriented rather than just display fancy foreign products for prospective buyers.

Second, exhibitions like Aero India and Def Expo could evolve further to become a platform not only for the best available products and their validating demonstrations but, more importantly, serve as a special place for both sellers and buyers to exchange notes on their intents. These events could also be a large ground for smaller companies and young/nascent innovators to display their products. Aero India 2021 was different from all previous editions as it gave reasonably large space to small and medium-sized companies, and interestingly a few young startup entrepreneurs. Serious customers always look for perfect products for their needs. But, they also look for futuristic platforms and show interest in new technologies. In comparison to several editions of Aero India shows between 2004 and 2012, the event was overwhelmingly dominated by aerospace majors like EADS, Boeing, Lockheed, Raytheon, General Dynamics, Rosoboronexport and others because this time coincided with India's acquisition tender process for 126 medium multi-role combat aircraft (MMRCA), the current edition was focused mainly on indigenous products for prospective customers.

Third, Aero India 2021 not only brought products and producers and customers, but it also was explicitly designed to play arms dynamic for India. The flagship Indian product – Tejas – was the main attraction. In addition, seminars and conferences during and prior to the show specifically emphasized arms exports strategies, augmentation of the domestic aerospace sector and arms dynamics of a particular region – the Indian Ocean Region (IOR). Thus, the show blended scientific/conceptual aspects of the aerospace domain, displaying contemporary and futuristic products, efforts toward indigenization, and, most importantly, gave India an opportunity to woo prospective customers from the IOR countries whom have already shown expression of interest to buy the Tejas. While previous editions showed India as a buyer, Aero India 2021, for the first time, overtly displayed its intent for India as an emerging supplier/exporter.

Last but not least, the show distinctly showed its intent on collaborations – not only between large advanced OEMs (Original Equipment Manufacturers) and Indian companies but also within Indian companies. More than two hundred Memoranda of Understanding (MoUs) were signed during the show, many of which concentrated on collaborations between large foreign and Indian conglomerates. However, what escaped our attention was the fertile ground for small and medium companies (MSMEs) to forge ties with their foreign counterparts and startups, especially by young innovators. Indian Prime Ministers call to the nation to become 'Atmanirbhar Bharat' (self-reliant India), and other themes like Make in India and Digital India were visible during the event.

Military exhibitions must go beyond mere exhibitionism. They should be focused on themes, business models and strategic intents. Aero India 2021 appears to have achieved a reasonable degree of success in all these aspects. However, it is only at a nascent stage in its new posture. It must further refine its entire show in future in all areas – display stalls, seminars, press briefings and B2B/B2C meetings. As Def-Expo has gone to many places beyond New Delhi, like Goa, Lucknow and Chennai, Aero India is still held at the same venue for the last 25 years. The government should also think of holding Aero India in cities like Hyderabad, Pune or a major city in North India.

The article is part of Defence and Security Review, Volume 1 (No.2), MARCH 2021. Also, in the issue,  Brief No.1: "Theatre Command based Military Structure for India"; Brief No.2: Evolving Geopolitical Calculus in Indo-Pacific’.