Citizen Journalism: Assessing Both Sides of the 'Fifth Estate' 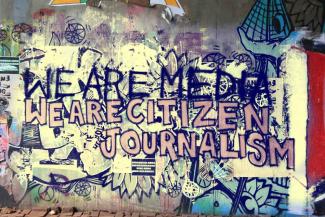 As of August 2020, there are 696.77 million internet users in India and over 10,000 registered publications as per the Registrar of Newspapers of India. Albeit, the wave of Citizen Journalism is witnessing tremendous growth in the country. Citizen Journalism is practised by people who are not professional journalists yet disseminate information via websites, blogs and social media. Often tagged as the fifth estate (or pillar) of democracy, the surge in the phenomenon of Citizen Journalism stems from the fact that the common man today is unsatisfied with the overall quality of Journalism where all news channels seem virtually sounding the same and that it’s not easy for the media-persons to brainwash the common folk with their chiselled opinions. Manipulation by mass media is done in several ways. Noted philosopher Noam Chomsky has given specific tactics media resorts to manipulating people with respect to propounding fear amongst the bewildered masses by using news channels as a tool of propaganda. Rather than use calm reason, most corrective television news channels use fear to hammer its message home. It’s one of the most powerful ways to grab an audience’s attention. They use empty languages and outlandish phrases that sound good but don’t mean much. However, of late, the illusion of fear is evaporating because of the improved accessibility of the internet. The old school conglomerates of media often find themselves challenged due to the expansion of such independent media outlets.

Generally, a common man is the recipient of news from a professional journalist. However, Citizen Journalism allows him to create news reports by himself. Audiences now are increasingly creating and publishing content by themselves rather than just blindly consuming. It has sparked a full reportage of user-generated content. It allows him to directly participate in the happenings of the society. It will enable him to question the authority, challenge the existing status quo and contribute to the current dialogue so much so that debates on the impact of this trend on mainstream media have been widely contested. It also helps establish an effective, two-way communication system. It has made people vocal and given them a sense of empowerment too.

It has been seen in many countries that mainstream journalism often falls prey to the political regime of a country. The mainstream media usually pushes the state’s narrative under the garb of journalism and factual reporting. Eminent news anchors today have become a sort of government’s propaganda peddlers. The mainstream media could show tendencies of hostility towards certain information and individual/s because they don’t align with their views. In this regard, the unbiased Citizen Journalism is the need of the hour and can serve as an alternative.

Mainstream media today has been accused of prioritising profit maximisation over disseminating information. This motive could also compel them to serve the state as government advertisements form a considerable chunk of revenue earnings for the media industry. On the other hand, because of its cost-effective nature, Citizen Journalism works without any such government patronage and remains dependent only on public support. It is often deemed to be non-profit making in nature.

Many professional journalists too have vouched for non-profit making journalism to be the only hope for one to gain unadulterated truth. Citizen Journalism if done with the intent of serving the larger good rather than a personal agenda, could prove to be fruitful.

Citizen Journalism is also aptly known as Democratic Journalism as it is practised by a common man for the benefit of society. It helps in recognising the diversity of voices and opinions, which is absolutely necessary for a democracy to thrive. It has created a space where the ins and outs of the government can be freely discussed. It allows for proper analysis or post mortem of governmental policies by common individuals.  It gives one the edge of pointing out what the media fails to report. It also does the essential job of serving as a bridge media between society and the policymakers.

Very often, young reporters or certain people in the newsroom are not allowed to express their opinions and are silenced owing to the political affiliation of their organisations. Citizen Journalism enable them to stand alone and amplify their voice without any constraints whatsoever.

Citizen Journalism also finds substantial grounds in terms of instantaneous live reporting. Any person with a mobile phone and access to the internet connection in any part of the country has the potential to be a Citizen Journalist. They have the benefit of instantly capturing scenes from nooks and corners of the world where even real-time reporters may not have the right access. An apt example is of the 24-year-old girl living in Iraq who blogged daily about the turmoil in her country. It allowed the world to see the events from a resident’s point of view. It showed them a facet that even the global media couldn’t adequately represent. Prominent news houses couldn’t have done what this girl did just by virtue of an internet connection and the advent of Citizen Journalism. Her blogs were later compiled into a book named “Baghdad Burning”.

India is a country with a considerable rural population dependent on agriculture as the primary source of income. The rural residents face many problems that often go unnoticed by major media houses who pent up profits by just political reporting. Their plight is often trivialised by big and mainstream media channels. It happens so because the media of our nation functions on authoritarian lines where the authorities have all rights to permit any media and control it by providing the license to the press and make inevitable censorship. Under these circumstances it shouldn’t be surprising to assume that both print and visual media houses work to appease the government at the helm rather than criticise or in other words, to tell the truth, or reality on the ground. But Citizen Journalism has now put forth the agonies of people at the receiving end (such as farmers or migrant labourers)  and has allowed Journalism to grow at the grass-root level.

Citizen Journalism today has become such a prominent aspect of the society that it can’t be ignored. It has the potential to spark social movements and incite lawmakers to make appropriate amendments. Be it the very famous #MeToo movement that shed light on the harassment faced by women at their workplaces or the #blacklivesmatter campaign that highlighted excessive usage of force and discrimination by the police force on the people of colour in the US; Citizen Journalism brought forth the ugly truth of a society that would have otherwise gone unnoticed. Decriminalisation of Article 377, a revolutionary decision by the Supreme Court of India that dealt with homosexuality, as a result of massive support garnered on social media. Citizen Journalism led a conservative country like India towards taking this enormous step.

However, like every coin has two sides, Citizen Journalism too comes with certain downsides.

Mere audience participation doesn’t translate into Citizen Journalism. Unfortunately, citizen commentary is today mistaken for Citizen Journalism.  Although deemed to be unbiased, Citizen Journalism is often carried out with motives. It is often impossible to comprehend the prejudices that drive an unknown person who publishes an article on social media. It is difficult to assess personal bias either, especially when she/he isn’t an accredited journalist from a reputed media house.

Often due to lack of filter, Citizen Journalism can be responsible for promoting hate speech as free speech. “Gatekeeping,” a very definitive aspect of Journalism, is amiss in social media. Since social media is the medium of expression for Citizen Journalism, it is prone to aiding the circulation of fake news. In lack of proper media policies and high user sensitisation, Citizen Journalism can also be blamed for creating chaos, especially in a vast country like India. Readers believe anything that is sent to them due to lack of awareness. Facebook and WhatsApp by far are the worst perpetrators when it comes to spreading fake news. It is to be noted that Facebook is also the most preferred forum for citizen journalists. The spread of fake news via Citizen Journalism and social media is so rampant that in 2018 it led to the death of 20 people in mob violence. Also over 5000 social media handles and websites from Pakistan were found to be part of actively spreading fake news and propaganda on CAA (Citizenship Amendment Act) resulting in protests in 2019 and 2020 in Delhi and other cities of India.

Citizen Journalism can also be blamed for spreading opinions under the guise of facts. A common man finds it difficult to separate between the two and is easily influenced.

The myriad voices and diverse opinions are what make Citizen Journalism a concept so savoury. Yet one should never forget that facts are sacred and commentary is free. Too many voices often lead to chaos, and chaos causes disruption. Journalism is a profession of responsibility and accountability. A qualified journalist has a mind trained to evaluate facts and present it in a manner ingestible to the general public or a particular faction of the society. Citizen Journalism hence in this regard, lacks the critical aspect of objectivity.