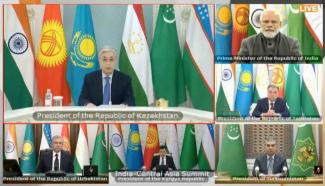 India has launched a comprehensive but cautious extended neighbourhood foreign policy in Central Asia during India-Central Asia Summit on January 27, 2022.

Despite the legendary and majestic mountain ranges Hindu Kush, Himalayan, Pamir, Tien Shan as water towers feeding billions of Asia, these giants have so far created natural physical barriers among people and nations, especially between India and Central Asian Republics (CARs) - Kazakhstan, Kyrgyzstan, Tajikistan, Turkmenistan and Uzbekistan. However, after three decades of dilly-dallying, India has certainly reached Central Asia as India- Central Asia summit unfolded on January 27, albeit virtually in Delhi. Has India rightly set the goals for a tangible, lasting long-term engagement in Central Asia?

As a first, the Modi administration invited heads of governments of CARs to participate as the chief guests at the Republic Day celebrations on January 26. Subsequently, the Ministry of External Affairs (MEA) maintained an eerie silence on the participation of CARs due to either the Kazakhstan unrest in early January or Moscow- Kiev-NATO entanglement or, perhaps, a robust China-Central Asia infrastructure engagement in the region. However, MEA called off the physical participation of leaders of CARs on the ground of surging Covid-19/Omicron infection in India. Instead, the Modi administration decided to have a virtual meeting on January 27 that strongly indicated the importance of the region for India after the Taliban took over Afghanistan.

The timing of the first India-Central Asia Summit could not have been tactical or symbolic. While India celebrates 75 years of Independence and the CARs of their 30th anniversary of independence, the host is also rejoicing in three decades of diplomatic relations with later. At the beginning of the Summit, Prime Minister Modi pointed out the very relevance and immediate importance of cooperation among CARs and India for regional stability and security after the developments in Afghanistan. The Summit was the culmination of various diplomatic engagements (both Track I and II) since the establishment of Connect Central Asia in 2012, including India-Central Asia Dialogues at the Foreign Ministers' level (the last one held in December 2021) and the National Security Advisors (NSA) meeting in October 2021.

The Delhi Declaration, a comprehensive joint declaration adopted at the end of the Summit, enshrines the shared vision for an enduring and comprehensive India-Central Asia partnership. The fresh perspective has forward-looking elements to strengthen India-Central Asia relations. Moreover, the Delhi Declaration is a broad convergence of the ideas on crucial regional perspectives. Despite India's immediate diplomatic recognition of five 'Stans' after their disintegration from the former Soviet, India has been the least visible in Central Asia for the last three decades. At best, India has so far pursued a limited, peripheral and contractual foreign policy in the region.

While India conveyed its commitment to provide humanitarian assistance, all leaders agreed and reiterated their strong support for a peaceful, secure and stable Afghanistan. The Delhi Declaration also establishes a Joint Working Group to monitor the developments in Afghanistan. India successfully brought all the CARs to an agreement to utilize the services of the Shahid Beheshti Terminal at the Chabahar Port to facilitate trade between the land-locked CARs and India/other external markets.

One of the breakthroughs of the Summit is the institutionalization of the India-Central Asia relationship. The structure and process of the political, economic, trade, energy, defence, security, culture, and counter-terrorism engagement have been formulated under the Delhi Declaration for the next three decades. The India-Central Asia Summit will be held every two years in one of the countries of CARs and India. Not only the Foreign Minister's dialogue has been formalized, but regular meetings of Trade Ministers, Culture Ministers and Secretaries of the Security Councils are also being formalized. India hopes to bring a concerted effort to democratize the UN Security Council. The Central Asian Leaders welcomed the offer of India to establish an 'India – Central Asia Centre' in New Delhi, which could act as the Secretariat for the India – Central Asia Summit.

India must take advantage of the fact that unlocking the potential of India's engagement with CARs begins with facilitating the transformation of the landlocked countries economy into a green, sustainable and resilient economy. The leadership and people's willingness toward carbon-neutral growth will provide tremendous opportunities for India. The leaders have reposed trust during the Summit to look into avenues for joint research and exchange programs to share and develop technology that can address issues of food security, renewable energy, sustainable agriculture and overall sustainable development in CARs. India can facilitate with Tajikistan an informal group of Water Towers of Asia to address the climate emergency in Asia.

However, under the heavy influence of the Great Game, so-called geopolitical strategists pit India against China in the region, which is limited but obvious. India cannot and must not compete with China's heavy infrastructure-led economic aid to authoritarian-titled leaders in the CARs. Instead, India focuses on reliable, mutually agreed and mutually accountable, transparent, sustainable, human-centric co-created developmental projects as opposed to aggressive, unaccountable, infrastructure-led high risk, non-participatory and duping into debt type developmental projects by others in the region. One such avenue is to forge partnerships to create opportunities in sustainable financing from the small industries and banking sectors in India and CARs in natural resource management. Both PM Modi and Foreign Minister must emphasize building on environmental cooperation between India and CARs in various formats as an advantage against China. A regular meeting of the respective environmental ministry is a way forward between India and Central Asia.  Ideally, a Central Asia-South Asia environmental forum led by India prior to global climate change and biodiversity meetings is the next logical step.

It is fair to say that Central Asia is a natural partner of India. It is certainly premature to speculate on the success of India's renewed foreign policy in the region. The landlocked CARs are an enigma in themselves. Dynamism and uncertainty are two dominant features of the region. When the India-Central Asia summit was virtually going on, a border skirmish erupted at Batken at Kyrgyzstan and Tajikistan international border. Geo-strategists are trying hard through the permutation and combination to put India into the so-called Eurasian great game, which they believe has just begun after the US abruptly left Afghanistan.

It will not be a cakewalk for India either, from being a fourth pillion rider in the region to aiming to steer the wheel in the region with other external partners. Instead, India has drawn-out an elaborative but cautious 'extended neighbourhood' foreign policy for CARs.