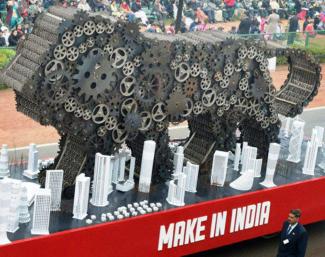 Recorded history suggests that great powers invariably possess formidable indigenous military industries. In addition to economic and technological prowess and a relatively stable socio-political system, states that aspire to play global roles, also need to possess military-industrial ecosystems that are free from outside pressures at both war and peace times. Two Super Powers dominated post World War II scenario for decades. Rise of China and India with a relative decline of Europe led to an evolving multi-polar configuration. Chinese ascendancy at global stage centred around its impressive economic growth for more than three decades, but what is more important to note is its arduous and determined journey from military import dependency since the 1950s till 1990s and again to self-reliance from 2000 onwards. Chinese aggressive behaviour in both economic and military domains connotes its deceptive intent – an ongoing trade war with the US and evolving military situation in India-China border are cited as two prime examples.

For long, India’s ideational aspirations to play a constructive global role have not matched the ground reality. At a time when Western arms producers from the US and Western Europe were privatizing their industries, India, much dependent on European suppliers, looked at the opposite direction by nationalizing MSIC since the early 1950s. British administered Ordnance Factories (OFs), as well as privately owned Walchand Hirachand (which later became HAL), were all brought under the exclusive ownership of the state. Subsequent entities from scientific institutions like DRDO and MSIC entities like OFs and other defence public sector units (DPSUs) flourished under

government patronage but failed to meet the demands of the armed forces.

War with China in 1962 brought in substantial changes in Indian MSIC, but such changes were not in tune with the basic operating principles of MSICs of democratic countries. Indian MSIC was still dependent on a captive market (Indian armed forces) and under exclusive state control with no manoeuvrability in the international arms market for sustenance. Refusal of transfer of technology by countries like the UK and other European suppliers during 1950s and 1960s virtually led India to depend more on Russians, who became a prime supplier since mid-1960s. What was more disturbing was that neither suppliers were willing to part with technological knowledge nor Indian MSIC could develop technologies indigenously. The net result was considerable import dependency, a problem that continues till date. An aspiring global power with import dependency is a contradiction in itself.

It was hoped that after the Kargil conflict, India would wake up. It did but lost the way again. At least a dozen high powered committees were formed in 14 years – starting from Subrahmanyam Committee in 1999 to Dhirendra Singh Committee in 2014. Nine rounds of reviews were made on the Defence Procurement Procedure (DPP) during the same period. In between, reforms on defence offsets banking were made. Also, a Defence Production Policy came out in 2011. Despite best efforts, Indian MSIC did not produce desirable results.

in Uttar Pradesh and Tamil Nadu respectively, with half a dozen defence manufacturing clusters across the country; e) a new draft defence production policy is being fine-tuned for a declared intent on India’s MSIC transformation; f) there is a substantial increase in the percentage of private sector involvement in defence projects; g) periodic performance and security audits are taking place, especially after the terror attacks in Pathankot; and last but not the least h) creation of the position of Chief of Defence Staff (CDS) to provide single point military advice to the government, apart from several organizational changes within the higher defence management

It was only when the NDA government assumed power under the leadership of Narendra Modi in 2014 that India has seen a series of reformative attempts in a determined manner. Unlike previous attempts, these reform initiatives denote state will, decisive attempts, serious deliberations followed by prudent implementation. Consider these following points. First, quicker clearances of pending arms acquisitions were made during the tenure of all successive defence ministers – from Arun Jaitley to Rajnath Singh; a total of INR1,80,000crore has already been allocated to different proposals with the intent on another INR 1,30,000 crore to be given for the next three years. Second, serious attempts were made during the tenure of late Manohar Parrikar for comprehensive reforms under the chairmanship of Lt Gen (retd.) D B Shekhatkar, who submitted his report in 2017 and since then,  a series of attempts have been made to implement the recommendations. Third, attempts have been made to define and implement a Strategic Partnership model for involving Indian large private companies in high-tech and large defence projects. Last but not least, in addition to encouraging the MSMEs, the government has already started two ambitious defence industrial corridor projects sector.

A definitive indicator of seriousness on the part of the government is its determination to pursue reforms amid pandemic times. Apart from the PM’s national call for Digital India, Make in India and many other such calls, Modi has announced Atmanirbhar Bharat movement during the ongoing pandemic. Furthermore, the indication is related to announcements like corporatization of Ordnance Factories (OFs) and Negative Import List (for 101 items) for encouraging the indigenous industries to participate in more than a hundred different defence manufacturing projects. Government-owned testing facilities have been opened up for the private sector. Recently, two major defence projects that were selected for acquisition from abroad have been considered for award to Indian companies. Prime Minister has declared that India can be a reliable arms exporter, setting a target of USD 26 billion value creation for the Indian defence sector by 2025 and USD 1 billion for exports.

In terms of announcements and actions, the Modi government’s intent has surpassed all previous governments. All these announcements and initiatives would take time for visible results. Transformation of Indian MSIC would require state will, complementary executing mechanisms, a defined direction, effective and enthusiastic participation from the stakeholders and deployment of scientific, industrial and financial resources. State will is visible from definitive announcements coming from top political and military leaderships. Definitive direction – Atmanirbhar Bharat in the defence sector – has been laid out. Implementing mechanisms are being tweaked periodically toward result orientation. Cautious optimism is seen coming from the private sector. All of these are good signs.

Cumulative reforms were undertaken in Indian MSIC in the past six years – both in terms of current and future announcements, ongoing reform initiatives and faster execution – point toward the realization of the broader strategic goal of making India Atmanirbhar in all aspects of the nation-building process. Modi’s call and his consistent emphasis on making India a strong military power even during difficult pandemic times show formidable signs of the will power of a state, that gives priority to the welfare of the citizens and does not neglect sectors like national defence and security. Ambitious announcements are also embedded in gigantic structural problems that India has been suffering from long-time.

If the state-will prevails, all such problems and complexities can fall in line. Great powers’ primary strength is state-will, India’s should not falter; it is hoped.

[The article was first published at Institute of Social and Cultural Studies (ISCS) India's Bi-Monthly Bulletin, NEWSREEL, Vol. I (4), October-November, 2020.]