The Israeli Iron Beam: A New Chapter in the Era of Combat Lasers 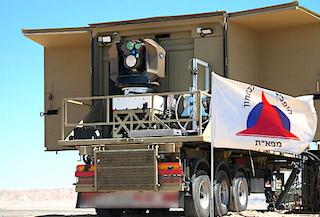 From sensors and satellites to radars and avionics, from hi-tech drones to air defence systems and cyber weapons, Israel continues to innovate, improvise, and adapt to changing needs and compelling demands of the modern war. A country which lacks strategic depth appears to have acquired technological depth and is at the forefront of deploying new military technology on the battlefield.[1] Israel spends approximately 4.5 per cent (more than any country) of its gross domestic product (GDP) on Research and Development (R&D) (Jerusalem Post, November 05, 2020). While Israel’s investment in R&D is impressive on its own, about 30 per cent goes to products of a military nature.[2]

Israel recently tested a new laser interception system called “Iron Beam”. It is an energy-based combat laser system that can intercept and shoot down an incoming airborne rocket, UAVs, mortars and missiles. Unlike using kinetic energy to intercept an incoming airborne threat, Iron Beam employs Directed Energy (DE), i.e., a condensed beam of electromagnetic energy- like a laser to neutralise an incoming aerial threat. It uses fibre optics to generate a laser pulse of 100 kilowatts to destroy an aerial target by hitting it for about 4 or 5 seconds and has an effective range of about 7 kilometres (Breaking Defence.com, March 22).

The quest to develop combat lasers by the Israelis began in the mid-nineties. In July 1996, both the United States and Israel undertook a joint project to build a combat laser complex. The project was officially known as THEL (Tactical High Energy Lasers) (Breaking Defence.com, March 22). The aim was to create a close zone laser complex for missile defence. The THEL complex was based on a chemical laser using deuterium fluoride. This system was supposed to generate a power of up to two megawatts that was sufficient to destroy artillery shells and unguided rockets. The THEL project exhibited low operational preparedness and complex logistics, particularly for the size and portability. Therefore, The United States and Israel decided to modify further and develop an agile and portable system which came to be known as MTHEL (Mobile Tactical High Energy Laser) complex (Jerusalem Post, April 08 2021). Although the MTHEL complex successfully destroyed twenty-eight Katyusha unguided rockets and five artillery shells moving along predictable ballistic trajectories during the test trials, the Israeli defence establishment was not satisfied given the high complexity, high cost, and very modest characteristics.[3] Therefore in 2005, Israel withdrew from the MTHEL project and switched to the development of ‘Kippat Barzel’, popularly known as the “Iron Dome” (Jerusalem Post, April 08, 2021). The Iron Dome was preferred over the laser-based system because the Israeli defence ministry concluded that the laser-based air defence system was yet to mature into an economically operational investment.

In 2014, an Israeli company Rafael presented a new project for the missile defence system called ‘Karen Barzel’ (Iron Ray) (Times of Israel, May 28, 2021). It was supposed to build a mobile system on a car chassis capable of hitting air targets of various types with the help of a laser beam. It was meant to target incoming rockets, mortar & tank shells, mines and UAVs. The Karen Barzel complex had two huge containers with laser systems installed and mounted on two trucks. This system was provided with a radar station for target detection and used a high-powered solid laser to hit the target. It also had a command post responsible for interacting with the components within the laser complex. Depending on the nature of the target, this laser complex was required to transfer a specific amount of heat energy within a few seconds to destroy the target. Subsequent research and development in the Iron Ray laser complex have resulted in the making of Iron Beam.

Israel has faced drone, rocket and balloon attacks from Hezbollah in the north and Hamas in the south. During the 2014 Gaza War, Israel was bombarded with waves of rocket attacks. Similarly, in May 2021, Israel faced a barrage of Hamas rocket attacks from the Gaza strip, resulting in the death of 10 civilians. Despite the cutting-edge technological sophistication of multi-layered Israeli air defence systems that includes the Iron Dome for intercepting and shooting an incoming rocket and some cruise missile attacks, David’s Sling for cruise and ballistic missiles and the Arrow missiles - deployed and operational to provide for an effective counter against any adversarial ballistic or potential hypersonic missiles, these air defence systems have certain limitations in the event of facing saturation rocket/missile attacks (RAND Corporation. November 29, 2017).

Advantages and Limitations of The Iron Beam

With the advantages mentioned above, the Iron Beam has its downside. The system can be ineffective in low visibility due to heavy clouds or other inclement weather conditions. Thus, the system is highly dependent on weather conditions that can reduce its operational efficacy. Therefore, Israel has plans to mount the system on an aeroplane to negate the effects of heavy clouds and rains. On the other hand, despite being operationally cheaper in intercepting a hostile aerial threat, the Iron beam laser complex is significantly costly as far as the acquisition and maintenance of this technology are concerned.

The combat lasers have advantages over conventional firearms/weapons as they do not need ammunition or reloading and are meant for precision hitting, increasing accuracy and reducing collateral damage to negligible levels. Laser weapons are silent; therefore, shots cannot be traced, making these weapons ideal for covert and special operations where stealth and noiselessness are primary factors for a mission to succeed. However, laser weapons do not have the strategic range to hit targets as far as thousands of kilometres. Therefore, despite their futuristic orientations, they cannot act as replacements for the conventional weapons already in use. Instead, they are meant to enhance the overall capability of the available weapons systems in operational service.