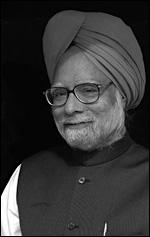 The three-day visit of the Prime Minister Manmohan Singh to the northeast, described as significant for the peace and development of the region, failed to rise above the morbidity of a political visit and in the end, left many discontented. A visit to Manipur and Assam, especially when both States stand at crossroads, was expected to galvanise a host of positive forces leading to discontinuation in the phase of violence and agitation. However, amidst announcements of regular sops and assurances, the Prime Minister’s visit remained an immensely forgettable affair, as far as northeastern hopes and aspirations are concerned.

The Prime Minister’s visit was preceded by his meeting with writer Indira Goswami who has been trying to achieve a breakthrough in the process of negotiation between the government and the United Liberation Front of Asom (ULFA). Goswami during her meeting with the Prime Minister on November 19 had appealed to initiate a process of dialogue on the outfit’s prime demand of sovereignty for Assam. Even though none expected the Prime Minister to accede to such a demand, he was expected to take into account the opinion of the State government, which seems to be in favour of a dialogue process. However, the Prime Minister put to rest any such speculation and said during his speech in Guwahati. He said, “If they shun violence, then I will invite them for talks but violence and talks cannot go on simultaneously.”

The visit was much awaited in Manipur. Summing up the overall expectations, an Imphal based English daily in its editorial on November 11, commented: “We hope and are confident that Dr Singh will not treat issues the people of Manipur and the northeast are sensitive to as trivial matters as so many of his predecessors did.” However, the constitution of a committee to examine the working of the controversial Armed Forces (Special Powers) Act left many disappointed. Irrespective of the steps such as the withdrawal of the Assam Rifles from the historic Kangla Fort and the up-gradation of the Manipur University to that of a central university, the leaders of the Apunba Lup, the umbrella organisation spearheading the agitation, announced the resumption of their stir. A statement issued by the Apunba Lup, said: “The people of Manipur cannot be taken for a ride by such policies.”

The non-announcement of the customary financial packages to has displeased many including the official circles. The Prime Minister announced during the tour, “I am not going about selling economic packages or distributing money. Our concern is accelerating economic growth in the State”. However, financial largesse was bestowed on both the States. The package for Assam included among other special plan assistance of Rs. 240 crore for flood damage repair and infrastructure development during the current financial year and Rs. 45 crore for flood relief and drinking water supply. Developmental projects worth over Rs 2777 crores were promised to Manipur. However, most of the projects announced have been lying in the planning stage for long and are unlikely to be initiated soon irrespective of the Prime Minister’s announcement. For example, the proposed rail project between Jiribam and Tupul in Manipur sought to be completed within a timeframe of six years is a highly doubtful venture given that project has been lying in the planning stage for last two decades.

The Prime Minister’s customary invitation to the militant groups evoked little response from the outfits. Responding to the Singh’s categorical rejection of ULFA’s sovereignty demand, the ULFA chief Paresh Baruah said, “The comments made by the PM was not unexpected and not different from that made by his predecessors. It is evident that the Centre’s colonial policy will continue.” Similarly, the Prime Minister’s peace overtures in Manipur was rebuffed by outfits like the United National Liberation Front (UNLF),  in a press statement on the eve of its 40th year of inception said: “The overthrow of Indian colonial rule is more primary than the repeal of the instrument of repression, the AFSPA.”

Manmohan Singh’s personal opinion on the utility of the Illegal Migrants (Determination by Tribunals) Act not only for Assam but also for the other States of India did not please many in the State except for the Congress Party and its supporters. Organisations like the All Assam Students Union (AASU), who are open votaries of the repeal of the Act, reacted to the statement rather bluntly. The AASU advisor Samujjal Bhattacharya was said on 23 November, “No right-thinking person would ever speak for the legislation.” Summing up similar moods in the State, which consider the Act a hindrance against deporting illegal migrants, The Sentinel, editorial (November 24) summed up the Prime Minister’s visit as ‘frustrating’.

No doubt that visits of this nature have extremely limited significance given the rising and incompatible popular expectations. However, as is apparent, the visit could have been used in a much more effective manner had the Prime Minister taken care to appreciate the overwhelming local sensibilities.