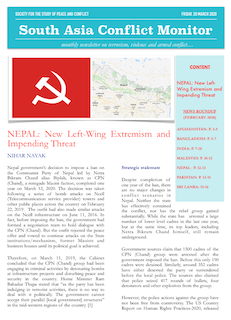 Nepal government’s decision to impose a ban on the Communist Party of Nepal led by Netra Bikram Chand alias Biplab, known as CPN (Chand), a renegade Maoist faction, completed one year on March 12, 2020. The decision was taken following a series of bomb attacks on Ncell (Telecommunication service provider) towers and other public places across the country on February 22, 2019.  The outfit had also made similar attacks on the Ncell infrastructure on June 11, 2016. In fact, before imposing the ban, the government had formed a negotiation team to hold dialogue with the CPN (Chand). But the outfit rejected the peace offer and vowed to continue attacks on the State institutions/mechanism, former Maoists and business houses until its political goal is achieved.

Therefore, on March 11, 2019, the Cabinet concluded that the CPN (Chand) group had been engaging in criminal activities by detonating bombs at infrastructure projects and disturbing peace and security in the country. Home Minister Ram Bahadur Thapa stated that “as the party has been indulging in terrorist activities, there is no way to deal with it politically. The government cannot accept their parallel [local government] structures” in the mid-western regions of the country. [1]

Despite the completion of one year of the ban, there are no major changes in conflict scenarios in Nepal. Neither the state has effectively contained the conflict, nor has the rebel group gained substantially. While the state has arrested a large number of lower-level cadres in the last one year, but at the same time, its top leaders, including Netra Bikram Chand himself, still remain underground.

Government sources claim that more than 1500 cadres of the CPN (Chand) group were arrested after the government imposed the ban. Before this only 190 cadres were detained. Similarly, around 352 cadres have either deserted the party or surrendered before the local police. The sources also claimed that police seized 417 rounds of bullets, four detonators and other explosives from the group.

However, the police actions against the group have not been free from controversy. The US Country Report on Human Rights Practices-2020, released by the US Department of State, highlighted that the government or its agents have committed arbitrary or unlawful killings in Nepal, especially while targeting the Chand group cadres. Referring to the National Human Rights Commission investigation, the report mentioned about the suspicious death of a local leader of the Chand faction on June 20, 2019. The outfit’s Sarlahi district in-charge was shot dead by the Nepal Police at Lalbandi in Sarlahi district.[2]

A comparison of the police inventory over action against the Chand faction and the outfit’s political and military campaigning and internal support base indicate that the rebel group has the upper hand in many of its strategic stronghold areas like Rolpa, Rukum, Kapilabastu, Dang, Sindhuli, and Lalitpur. With 10,000 to 12,000 active cadre support across the country, the outfit claims to have set up parallel local government in the mid-western districts.  The claim could be true as the outfit celebrated with much fanfare the 25th anniversary of the 1996-People’s War (PW) on February 13, 2020, at Thawang in Rolpa district, the place of the genesis of the Maoists’ ‘people’s war’.

The celebration was held in the open ground at Thulo Gaun in Rolpa. Posters with red sickle-and-hammer flags were seen plastered all around the town. The party organized week-long sports and cultural events. It claimed that local patrons and well-wishers had generously donated for the celebration. Surprisingly, media sources quoting local leaders reported that the security agencies which had stopped the party from displaying flags and banners in the past did not interfere this time.[3]

Besides, unlike the Communist Party of Nepal (Maoist), which had led the PW from 1996 to 2006, the Chand group has so far not attacked any security forces or barracks in Nepal. Most of the attacks so far are targeted towards Ncell, infrastructure building companies, ruling and opposition parties’ leaders and Indian projects in Nepal. It could be a deliberate tactic of the outfit not to target the security forces.

Further, to make its presence felt in Kathmandu, on March 11, 2020, the party detonated a bomb at the residence of ex-Minister for Communications, Gokul Baskota, who recently resigned from his post following an alleged bribery charge for negotiating NPRs 700 million “commission” for awarding a contract to a Swiss company for security printing of passports.

The state’s response so far towards the newly emerged left-wing violent extremism in the country has been tardy. It lacks clarity about the nature of the conflict, is inept and thus ineffective. Barring arrests of some lower level of cadres, the outfit is very much active and is continuing with both military and political campaigns. That the seriousness on the part of the state to resolve the conflict is misplaced or ineffective is reflected from the following: First, unlike the CPN (Maoist) or 1996-2006 People’s war, the current government has banned the outfit as a “criminal and destructive group” and not a terrorist organisation. The government has perhaps taken this position so as to not acknowledge the conflict as a serious threat to the country. In this position, the government can take moderate action against the cadres and at the same time that will give space for negotiation with the top leadership of the outfit. However, these pressure tactics have confused the security forces to deal with the group.

Second, if the government was at all serious about resolving the conflict by negotiation or dialogue, it ought to have appointed a senior political leader as head of the talk team and opened the door for negotiation throughout the year, rather than offering a limited window period.

Third, despite the ban, the government has not issued any red corner notice or informed the Interpol to arrest the top leaders. There are speculations that some top leaders could be taking shelter at the India-Nepal border region/s. There are also media reports that the outfit has an active ‘front organisation’ in India called Pravasi Nepali Jana Samaj, Bharat. If that is the case, the Nepal government has not officially informed the Government of India either regarding the ban or about the presence of party workers and their sympathisers in India, if any. Nor has the Nepali side sought an exchange of information on movement and activities of the members of the outfit, which is vital given the porous and open nature of the Indo-Nepal border.

Lastly, already over 1500 cadres have been arrested. Further high-handedness from the State side without clarity about the nature of the conflict could lead to collateral damages. The rebel group could strongly use local people’s grievances against the state.

Will the movement replicate the 1996-People’s War? This is a question being debated widely in Nepal at the moment. In the absence of a clear road map from the government, the conflict will continue at low-intensity for some time. Due to geopolitical factors, no movement in Nepal has ever reached its decisive level without some form of external support. Given the activities of the group, it appears that it has been surviving with the support of local funders and sympathisers. Since the party has been banking on propaganda over issues like corruption, unemployment, marginalised groups’ dissatisfaction over the new Constitution and underdevelopment in the remote areas, its success and failure depend on the performance of the current and future elected governments in Kathmandu. Although the government claims relative success against the outfit after one year of the ban, it only seems that the group is facing a downward tune due to the arrests of lower-level cadres, but it certainly is not defeated altogether.

This article is part of the "South Asia Conflict Monitor", MARCH 2020.