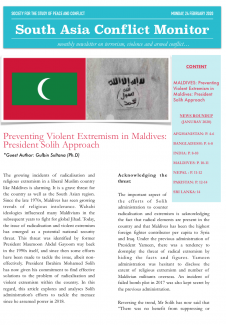 The growing incidents of radicalisation and religious extremism in a liberal Muslim country like the Maldives is alarming. It is a grave threat to the country as well as the South Asian region. Since the late 1970s, Maldives has seen growing trends of religious intolerance. Wahabi ideologies influenced many Maldivians in the subsequent years to fight for global Jihad. Today, the issue of radicalisation and violent extremism has emerged as a potential national security threat. This threat was identified by former President Maumoon Abdul Gayoom way back in the 1990s itself, and since then some efforts have been made to tackle the issue, albeit non-effectively. President Ibrahim Mohamed Solih has now given his commitment to find effective solutions to the problem of radicalisation and violent extremism within the country. In this regard, this article explores and analyses the Solih administration’s efforts to tackle the menace since he assumed power in 2018.

The important aspect of the efforts of Solih administration to counter radicalisation and extremism is acknowledging the fact that radical elements are present in the country and that the Maldives has been the highest foreign fighter contributor per capita to Syria and Iraq. Under the previous administration of President Yameen, there was a tendency to downplay the threat of radical extremism by hiding the facts and figures. Yameen administration was hesitant to disclose the extent of religious extremism and number of Maldivian militants overseas. An incident of a failed bomb plot in 2017 was also kept secret by the previous administration.

Reversing the trend, Mr Solih has now said that “There was no benefit from suppressing or keeping the information about extremism hidden from the public”(Maldives Independent, December 17, 2019). According to him, the government is taking on a difficult challenge but the government policy is “to face this and find a solution.” According to the Commissioner of Police Mohamed Hameed, some 1400 Maldivians have already fallen into extremist ideology across the country; 423 Maldivians attempted to join terrorist organisations in Syria and Iraq, of which 173 managed to enter the war zones. As per one date of the previous administration, only 69 people were said to have entered Syria.

Rehabilitation of the former militants

Solih administration is giving emphasis on the rehabilitation of the militants who have returned to the country after fighting militancy abroad. A centre for rehabilitation and de-radicalisation is under construction in Himmafushi island. As per government estimate, of the 173 Maldivians who went to Syria, 59 still remain there. The government is planning to bring them back in collaboration with other countries and place them in the rehabilitation centre, currently under construction, known as National Reintegration Centre, so that they cannot spread radical ideas in the society.[1]

Several Maldivians participated in the Jihad in Pakistan and Afghanistan much before going to Syria. Some of them have been handed over to the Maldivian authority. Maldivian government, however, did not take any action against those returnees as the previous laws did not permit so. Mohamed Nasheed during his presidency mooted the idea of rehabilitation of the violent extremists who were imprisoned for their alleged involvement in the Sultan Park bombing in 2007. He got them released, but the rehabilitation process could not be implemented as he was thrown out of power. In the absence of any provision for rehabilitation of the former militants, many of them are freely preaching extremist ideologies in the country. In this context, Solih administration’s focus on rehabilitation and de-radicalisation process is a welcome development.

The Prevention of Terrorism Act, which came into force in 1990, is an out-dated one and insufficient to deal with the problem of radicalism and violent extremism that the Maldives is facing today. The Yameen administration amended the Act twice in 2015, but loopholes in the amendments left lots of room for misuse. The Solih administration further amended the Act in 2019 to strengthen the ability of the relevant agencies to take appropriate measures to prevent terrorist activity while preserving the fundamental rights and freedom provided by the Constitution. An arrest has already been made using this amended Act.

Efforts to prevent the spread of extremist ideology through internet

Convinced that conventional security measures alone are inadequate in the fight against terrorism, President Solih has expressed his desire to work with technology companies from abroad to halt the proliferation of extremist ideology, the spread of hate speeches and propaganda materials, and messages of religious intolerance inciting violence through social media platforms. [2]

President Solih has announced the government’s decision to formulate a national action plan to share information and intelligence on radical and extremist activities among the relevant stakeholder institutions by the end of 2020. Yameen administration adopted a “whole of government” and “whole of society” approach to deal with the issue. National Counter Terrorism Centre (NCTC) was set up to facilitate and coordinate among the agencies to share their inputs. Unfortunately, interactions among the agencies are limited. At the same time, there is no single agency to execute the outcomes emanating from the interactions among the agencies coordinated by the NCTC. President Solih in his speech at the UN declared that “A central mechanism by which relevant stakeholder agencies can communicate, share information and work together to address terrorism and violent extremism, will be implemented.”

The Maldives under President Solih is committed to work with the international community now. The country entered into an agreement with India during Prime Minister Modi’s visit to the Maldives in June 2019 to establish a Joint Working Group on Counter-Terrorism to combat violent extremism and de-radicalisation. Japan has extended a grant of $70 million for Maldives’ counter-terrorism effort.[3] During his visit to Singapore in July 2019, President Solih visited ISD counter-terrorism Centre to learn from their expertise to deal with the issue (Edition, July 1, 2019). During his visit to the USA in March 2019, he held discussions with the State Department’s coordinator for counter-terrorism Nathan Alexander Sales. Maldives has also agreed to coordinate with the EU to prevent radicalisation and terrorist attacks. The EU provided 2.5 million Euros for this purpose  (Avas, August 8, 2019).

The Solih administration has expressed its commitment and announced a policy plan to deal with the issue of radicalisation and counter-terrorism. Positive policy announcements are made and measures are being initiated and to some extent enforced to realise his policies to deal with the issue of radicalisation. But much more needs to be done. Issue of terrorist financing needs special attention. During Yameen administration some measures were initiated in this regard. However, no investigation has been made using the anti-terrorism act. Solih administration is yet to make a policy statement on this issue.

While Solih has the right intention to deal with the issue, he also has hard political and practical challenges facing him at home. It should be noted that the parties known to be sympathetic towards radical extremism, such as Adalath Party (AP), extended support to Solih during the Presidential elections in 2018. Though the AP does not enjoy adequate seats in the Parliament to de-stabilise the government, it has the capability to mobilise people against Mr Solih in the name of religion. Therefore, it is doubtful that Mr Solih would go out of the way to do everything possible to curb radicalisation in the society which may offend the conservatives and the radicals. In November 2019, Solih banned the most prominent human rights organisation the Maldives Democratic Network (MDN) under pressure from religious leaders blaming that it had disrespected Islam in one of its reports in 2016.

It is widely believed that Saudi funds, which were flowing largely during Yameen administration, have contributed immensely towards radicalising the Maldivians over the years. Given the friendly relations between the Maldives and Saudi Arabia, it will be difficult for Solih administration to monitor and prevent the misuse of Saudi funds used for spreading extremist ideology.

Finally, Maldives has limited capability to monitor the radical activities across the country. The government has the best intention to deradicalize the society, but this is not going to be an easy task as the ineffectiveness of the government policies over the years have allowed conservatism to take deep roots into the society. But credit must be given to the Solih administration for at least acknowledging the existence of the grave threat of extremism in the country and showing political will to tackle the problem by taking measures at the national level and his willingness to collaborate with the international community. But he has to take proactive measures to implement and enforce the policy announcements made by him to deal with this serious problem facing the country.

[This article is part of South Asia Conflict Monitor, February 2020.]