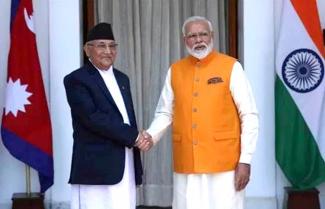 Nepal’s House of Representatives (the Lower House of the Parliament) on June 13, unanimously passed the Constitution Amendment Bill to revise the country’s political map, laying claim over areas of Kalapani, Lipulekh and Limpiyadura, which are currently in Indian territory. Earlier, on May 19, Nepal issued a new map by merging these three territories into its map based on the 1816-Sugauli Treaty. The passage of the bill has pushed the India-Nepal bilateral relations into a deep freeze since this has become a “public issue” in Nepal and no government (including the current one) hereafter will be able to attempt reversing this amendment due to strong resistance from the people. This move has also prevented possibilities of negotiations between the two countries. Nepal’s Foreign Minister Pradeep Gyawali said in an interview to India Today on June 12, that the new map “is going to be permanent and there is no room for change” (India Today, June 12).

Although the India-Nepal border dispute is around 40 years old, the issue reached its zenith on May 08, 2020, when Indian Defence Minister Rajnath Singh inaugurated Dharchula-Lipulekh (China border) road known as Kailash-Mansarovar Yatra Route. Nepal protested India’s action by bringing out a press release, which said, “The Government of Nepal has learnt with regret about the ‘inauguration’ by India of ‘Link Road’ connecting to Lipulekh (Nepal), which passes through Nepali territory. The Government of Nepal claimed that it has consistently maintained that as per the Sugauli Treaty (1816), all the territories east of Kali (Mahakali) River, including Limpiyadhura, Kalapani and Lipulekh belong to Nepal”(MOFA, Nepal, May 09). Nepal strongly claimed that despite repeated requests to India to hold a foreign secretary-level meeting, India’s “unilateral act runs against that understanding reached between the two countries including at the level of Prime Ministers [August 2014] that a solution to boundary issues would be sought through negotiation (MOFA, Nepal, May 09).”

A mystery shrouds over the sharp reactions of Nepal over Lipulekh issue at this particular time (May 2020), while the same area was already being shown as part of India’s new map, which was issued on November 02, 2019. On November 07, Nepal protested the Indian move by “only” pointing that “Kalapani is disputed territory”. There was no mention about Lipulekh and Limphiyadura in the November 06, 2019 press release by the Ministry of Foreign Affairs of Nepal (MOFA, Nepal, November 06, 2019). Technically, Nepal could have claimed all the three disputed territories in November 2019 itself and it could have issued a new map. It would be pertinent to mention here that this road construction has been going on since 2007 and thus Nepali authorities must have been aware of it. Then the question arises what was it that happened in May 2020 which forced Nepal to issue a new map? Is it politically motivated or instigated by any external force?

It appears that the issue is mostly politically motivated rather than being pushed by any external forces due to the following factors. Although, after the Galwan Valley incident on June 15, China had warned India that “India could face military pressure from China, Pakistan or even Nepal, if tensions along the border continue to escalate”(Business World, June 19).

First, India and Nepal have been trying to resolve their border disputes (re-demarcation of the border pillars and negotiations over Kalapani and Susta disputed borderlands) since 1981. This has been a major contentious issue, which has negatively impacted the bilateral relationship on several occasions. The issue has been dragging on mainly over the last 40 years and perhaps gives a ready-made electoral issue for the left parties to garner public support by raising anti-India sentiment.  With the adoption of the multiparty and democratic system in Nepal in the early 1990s, some left (including the Maoists) party leaders used this issue to grab public attention and gain popularity. The extra-regional forces, who are inimical to India, added fuel to this fire passively.

Second, the issue has been used once again by Prime Minister Oli for political purposes to regain his control over the NCP (Nepal Communist Party) leadership which has been challenging his authoritarian style of functioning. Just six days (on May 02 - second NCP secretariat meeting) before the new road inauguration, Prime Minister Oli managed to save his resignation demand from the top five leaders of the NCP. He reportedly aborted the crisis by declaring Bamdev Gautam as the next prime ministerial candidate acting upon the Chinese advice to keep the party united. While Prime Minister Oli was passing through a turbulent time, he manipulated the Lipulekh issue to divert the public attention and regain his control over the party.

Third, officially, since 1981, both the governments have identified two disputed territories - Kalapani and Susta - to be resolved through negotiations at the foreign secretary-level. Despite that, Nepal in May 2015 opposed India’s bilateral Border Trade Agreement with China on Lipulekh, which was not earlier officially listed as a disputed territory. Nepal claimed that the Lipulekh Pass, which was mentioned in the joint statement of May 15, 2015, during Prime Minister Modi’s visit to China, is a disputed tri-junction in which Nepal has an equal share. The joint statement states: “…The two sides agreed to hold negotiation on augmenting the list of traded commodities, and expand border trade at Nathu La, Qiangla/Lipulekh Pass and Shipki La.” However, the fact is that since 1954, China has not claimed the Lipulekh Pass as a “tri-junction”. Had the Lipulekh been a disputed territory or part of Nepal, China would not have signed these MoUs with India (MEA, India, May 15, 2015).

Lastly, it is to be noted that the new map of Nepal (issued on May 19) has not mentioned Susta as it does not have strategic relevance. Therefore, it could be politically motivated as the Nepali leaders want to keep the issue alive for electoral and vote bank purposes as in the case of the 1950 Treaty.  The border dispute with India is a major election issue in Nepal and has often dominated the country’s foreign policy discourse. Further, ultra-nationalist groups on both the left and right of the political spectrum have been spreading anti-India sentiments and demanding a greater Nepal to gain political mileage.

The bilateral relationship between Nepal and India is at its lowest point after the passage of the amendment bill. While Nepali leaders have expressed their position clearly for holding dialogue to resolve the border issues in the post- amendment period, India seems to find that “non-workable”, since the future governments in Nepal cannot bring another amendment in the Constitution as per the negotiation results. Also, this is an emotive issue and the direction of the talks cannot go against the public sentiment in Nepal. In that case, both the counties should intensify track-II level dialogue to neutralize negativity at the people’s level and clear the way for foreign secretary-level dialogue in the future.

[The article is part of South Asia Conflict Monitor, June 2020.