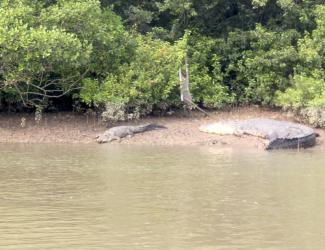 Swamps are a spooky, ugly, disenchanted place in children’s stories, books, animated serials and movies. These imaginations are relatively antithesis of the real value of swamps and others where land meets water. Wetlands, as commonly known, are abundant in life and livelihood. Therefore, the world celebrates every year on February 2 as World Wetlands Day to encourage global awareness about the vital role of wetlands in the ecosphere. This year’s theme - Wetlands action for People and Nature – urges immediate and definite action in investing financial, human and political resources to protect and restore the fast vanishing wetlands. Are we humans doing enough to bring wetlands into their unique function and restore their ecological features?

The rampage on and around wetlands under planned and unplanned land-use change is the hallmark of progress in most emerging economies, including India. Wetlands are among the ecosystems with the highest decline rates, loss and degradation. As one of the major reasons for wetland loss, urbanization processes have degraded existing wetlands in the city limit and swiftly destroyed or transformed the rural or peri-urban wetlands. Waste dumping or landfilling of wetlands are a common sight in India. Also, climate change, population increase, land-use changes and unsustainable consumption have contributed to the loss of gross wetlands areas. The persistent threats from dysfunctional or disruptive water drainage, pollution, unsustainable use, invasive species, deforestation and soil erosion on remaining wetlands are potentially high.

The UN Framework Convention on Climate Change (UNFCCC) is alarmed about the degradation of wetlands, essential regulators of the global climate, which are disappearing three times faster than forests. Nearly 87 per cent of wetland areas have been lost globally in the last 300 years, and around 35 per cent of wetlands were lost between 1970 and 2015. However, at present, the total global wetland area is nearly 1.5 -1.6 billion hectares (ha). Despite a lack of data on the actual loss of wetlands in India or updated assessment of total wetlands, multiple threats of altercation of natural hydrological regime, degradation of catchment areas, pollution, and invasive species, over-exploitation of resources, unregulated tourism and climate change have contributed to the degradation of various wetlands. From human-made inland wetlands to natural coastal wetlands, there was 10.002 million ha of 19 types of wetlands in India as estimated by the government in 2011.

Wetlands are areas of marsh, fen, peatland or water, whether natural or artificial, permanent or temporary, with water that is static or flowing, fresh, brackish or salt, including areas of marine water, the depth of which at low tides does not exceed six metres (Ramsar Convention). Further, wetlands may include riparian and coastal zones adjacent to the wetlands and islands or bodies of marine water deeper than six metres at low tide lying within the wetlands (Ramsar Convention). In India, there are three types of wetlands. Inland wetlands include marshes, ponds, lakes, fens, rivers, floodplains, and swamps. Coastal wetlands include saltwater marshes, estuaries, mangroves, lagoons and even coral reefs. Lastly, human-made wetlands include fish ponds, rice paddies and salt pans. Wetlands are land areas that are saturated or flooded with water either permanently or seasonally.

Despite its definitional hazards, 172 countries recognize that wetlands are critical to people and nature. The benefits and services from the wetland ecosystems, including environmental, climate, ecological, social, economic, scientific, educational, cultural, recreational and aesthetic, are essential contributions to human wellbeing. From Prek Toal in Tonle Sap in Cambodia to Chilka Lake in Odisha, nearly 3.2 billion people’s lives and livelihoods are deepening in the wetlands. Approximately one billion households in Asia, Africa and the Americas depend on rice growing and processing for their primary livelihoods. Rice grown in wetland paddies is the staple diet of 3.5 billion people. Over 660 million people depend on fishing and aquaculture for a living. The conservation and protection of wetlands require both international cooperation and unilateral measures.

The Convention on Wetlands of International Importance, especially as Waterfowl Habitat (famously known as Ramsar Convention), convened in 1971 at Ramsar, Iran, came into force in 1975 to provide the framework for national action and international cooperation for the conservation and sustainable utilization of wetlands. As one of the examples of modern global environmental cooperation, the Convention was negotiated on the premise of increasing loss and degradation of wetland habitats for migratory waterbirds. There are 2,435 wetlands of international importance (Ramsar Site) with 25.4 million ha. India became a party to the Convention on February 1 1982. Subsequently, India has 47 sites designated as Wetlands of International Importance (Ramsar Site), with a surface area of 1,090,230 hectares as of January 22, 2022.

Sustainable Development Goals (SDGs) also includes conservation of wetlands under Clean Water and Sanitation (Goals 6), Life below Water (Goals 14) and Life on Land (Goals 15) to refocus the importance of wetlands.  Aichi Biodiversity Targets of the Strategic Plan for Biodiversity 2011–2020 under the Convention on Biological Diversity (CBD) has called for implementable activities related to wetlands.

Why did it take four decades to declare nearly 47 wetlands in India as internationally necessary? From the outset, wetlands in India are the contested domain of centre-state relations. The few dominant features are friction between the revenue and forest departments, lack of uniform definition or absence of consensus designating wetlands, and conflicting stakeholders’ interests.

Wetland Conservation Rules 2017 prohibits activities like converting wetland for non-wetland uses, setting up industries, waste dumping, and discharge of untreated wastes and effluents. By 2014, the Union Government managed 115 wetlands under the National Wetland Conservation Programme. By 2020, the Union government took up work to restore and rejuvenate 130 wetlands under a four-pronged strategy. ‘It is a matter of pride for us that four Indian sites get Ramsar recognition. This again manifests India’s centuries-old ethos of preserving natural habitats, working towards flora and fauna protection, and building a greener planet,’ the Prime Minister of India wrote on August 14 2021, on Twitter.

Unless we know the value of wetlands, we will continue to destroy wetlands in the name of so-called expanding and modernizing urban spaces as smart cities. Cities are expected to account for nearly two-thirds of the total global population by 2050. Revival and restoration of wetlands or construction of urban wetlands in cities are immediate pathways to reduce the impact of climate change-induced disasters, including drought, flooding, waterlogging, heatwaves and greenhouse gas emissions.

Designating only Ramsar Sites for protection is not enough. Acknowledging, recognizing and valuing wetlands at the earliest and lowest governance level such as Panchayats in India, could successfully restore wetlands. Set aside those spaces from the developmental activities despite its incoherence with definitions of wetlands. Developing effective wetland management plans with all stakeholders, especially the communities directly depending on their livelihoods and mainstreaming it into the local, district and city levels, state and national level planning for climate change and disaster mitigation is the right direction to rejuvenate wetlands across the country. We need urgent collective action to rewet wetlands to restore the hydrological cycle and life cycle.

[An abridged version was published in "Paryavaran Perspective", February 2022.]