China and US: Concerns and Interests in Hypersonic Domain 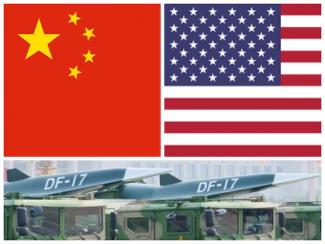 China testing hypersonic missile technology: there is one report and one rebuttal. Recently, the London-based Financial Times (FT) report has claimed that during August 2021, China has successfully tested a nuclear-capable hypersonic missile. However, an official denial immediately came from China, mentioning that such testing of the nuclear-capable hypersonic missile has not happened.  As per the Chinese foreign ministry spokesperson, it was only a routine test conducted to verify different reusable spacecraft technologies. China views that testing such a system is very important because such technology is beneficial for reducing the cost of spacecraft use.

China is yet to provide a satisfactory answer to the missing link for the 78th launch of the Long March (LM) series. The China Academy of Launch Vehicle Technology has officially declared two launches. On July 19, 2021, it has launched an LM 2C rocket, its 77th launch, while on August 24, 2021, there was the 79th LM flight. But there is a question mark about the 78th launch. It is expected that possibly, the 78th launch could have been the hypersonic missile launch.

Hypersonic missiles (could be nuclear-tipped) are missiles that travel at  Mech 5 or more (one Mach equals the speed of sound). The FT report claims that the Chinese military had launched a rocket that carried a hypersonic glide vehicle, which flew through low-orbit space before cruising down towards its target. The missile is known to have missed the target by about 30 km. However, nuclear weapons are area weapons, and such deviations do not matter much. The flying of the hypersonic missile through low-orbit space before cruising down towards its target helps avoid the detection by the radars. More importantly, such missiles can manoeuvre in unpredictable ways, with a possibility of controlling them and changing the target even after the launch. The existing missile defence systems are not in a position to handle hypersonic missiles, mainly owing to their high speed.

It has been reported that the recently tested Chinese missile was developed by the China Academy of Aerospace Aerodynamics (CAAA), which is a part of the state-owned China Aerospace Science and Technology Corporation (CASTC). The CASTC makes missile systems and rockets for China’s space programme. The vehicle tested was launched on a Long March rocket (LM). LM has various variants, and this system has undertaken many successful space launches and has been a much reliable launch vehicle system employed for China’s space programme.

China has made significant investments in hypersonic gliders. These are known as Hypersonic Glide Vehicles (HGVs) and can reach speeds to the level of Mach 10. These are ideal attack munitions that could be used against a variety of hard targets—like warships, command and control facilities, communications links, hangars, and intelligence facilities. The Chinese vehicle is known as the WU-14 glider or DF-ZF. During January 2014 and April 2016, China has conducted seven hypersonic tests, of which six have been successful. All this indicates that China’s has been seriously working on this technology minimum for a decade.

During the 2019 National Day parade, China had displayed its hypersonic capability for the world to realize. There was a display of PLA’s DF-17s, a solid-fueled Medium-Range Ballistic Missile (MRBM-range 2000 km), designed to launch the DF-ZF (WU-14) hypersonic glide vehicle. There were some indications that the next step China could take is to replace the MRBM platform with an ICBM (Intercontinental Ballistic Missile) platform. The possible ICBM platform could be DF-41, which has the range to reach the US mainland.

If this is what the trajectory of China’s hypersonic programme known openly, then can they fake their testing under the category of testing a reusable space launch system? Did the space-based sensors of major powers fail to identify such a test?

The best example of a reusable spacecraft is the space shuttle technology developed by the US. Here the craft takes off like a rocket (it has three parts: external tank, boosters and orbiter); at a particular height, the orbiter separates from the external tank and subsequently starts operating as a spaceplane, and after finishing the task in space, it re-enters the earth’s atmosphere and lands back as an aeroplane on the runway. The same orbiter could be used for another mission. There are normally two solid rocket boosters attached to the external tank/orbiter during the launch. After the take-off, these boosters get separated from the orbiter at a particular time. They have their parachutes and are programmed to get dropped in the ocean. Subsequently, they get collected by the agency for reuse. The US-based company Space X (owned by Elon Musk) has developed a system, which could be called the partially usable system. During the launch of satellites, the first stage of the rocket gets dropped in the ocean and gets collected for the reuse of another rocket. The private space travel company Virgin Galactic operates the reusable SpaceShipTwo spaceflight system.

China is also working on various technology solutions to offer the advantage of reusable space launch systems. It had launched a reusable experimental spacecraft in September 2020 via a Long March-2F carrier rocket from the Jiuquan Satellite Launch Center. After spending two days in orbit, it returned safely to the scheduled landing site. Possibly, their idea was to develop a spacecraft on the line of the US air force’s X-37B spaceplane.

On the other hand, China had also tested a different type of reusable technology on December 21, 2020. There was a successful launch of the first flight of the Long March 8 rocket. Here China is was attempting to develop the technology on lines of SpaceX's Falcon 9. This rocket has thrust control technology. The idea is to develop the future missions of this rocket by offering the capability of recovering and reusing boosters.

Now the question is, what did China launch in space as mentioned by them during July 2021? It was possibly a clandestine test flight of a reusable space vehicle. Maybe this could have been a more advanced experiment than the test flight, which had taken off during Sept 2020. The FT story claims that the hypersonic test happened during August, while China claims its launch took place during July.

China’s crewed spacecraft Shenzhou-12, atop a Long March-2F carrier rocket, was launched from the Jiuquan Satellite Launch Center in northwest China's Gobi Desert on June 17, 2021. It was China’s seventh crewed mission and had a three-person crew. They had spent three months on the Tianhe module of the China space station in making. On September 17, 2021, it landed back in North China's Inner Mongolia Autonomous Region. It was a space capsule dropped at a predesignated location by using a parachute. This entire mission also had some elements of reusable technology.

Finally, it hardly makes a difference if the test was a hypersonic missile or a spaceplane. It is a known fact that China has been developing and testing such technologies for a long. Recently, even North Korea has tested hypersonic technology. So, it is not understood what makes Washington surprised that China has tested a hypersonic glide vehicle. If China has tested spaceplanes, then there is definitely no logic for the US to question China. Their air force has a secretive spaceplane called X-37B.  Since 2010, it has been flying covert missions, and a single mission mostly lasts for more than one year time in space. The US is not ready to divulge any details of such missions.

Now there is a sudden hype given China’s hypersonic testing. It is a known fact the existing missile defence systems like Aegis, THAAD (Terminal High Altitude Area Defence) and PAC-3 (Patriot Advanced Capability) are of no use to handle the threat of incoming hypersonic missiles. For the last few years, the US has already started working on Next Generation Interceptors. They are also upgrading their land and space-based sensor networks. Different types of radar systems are getting developed. It is expected that their prototype hypersonic and ballistic tracking space sensor that will allow the tracking of hypersonic threats and add resiliency to the sensor architecture should be ready by next year. In the ballistic missile defence systems domain, Russia’s S-400 is giving tough competition to the THAAD system. The US would be very keen to ensure that they should be the first to offer solutions (defences) to address the threat of hypersonic weapons.

Recently, Australia made unilateral cancellation of its contract to purchase French submarines (the AUKUS security pact). Now, it is the US that is going to sell the nuclear submarines to Australia. The reason sited over here is that Australia should handle the China threat effectively, and hence they require nuclear-powered subs. In recent times, it has been observed that the US is not losing any opportunity to highlight the China threat. This is not to say that the China threat is not real. Definitely, there are many concerns about China’s strategic intentions. But at the same time, it is also important to note that the projection (and at times ‘hype’) of such threats only helps the global defence industries to proposer!