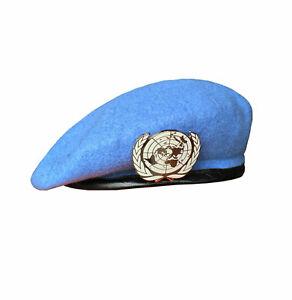 The history of the United Nations peacekeepers goes back to 1948 when 36 unarmed military observers went to supervise the Arab-Israeli war. Since then it has grown enormously for the cause of world peace, tranquillity and larger benefit of humanity. The UN peacekeepers initiated as a task force working towards easing out the tension and prepare grounds for negotiated settlements, maintaining their impartial presence. There are 62,289 Military personnel and civilian police serving in 16 current peacekeeping operations as on 30 September 2004. Some 102 countries are contributing military personnel and civilian police to this effort. Most recently, on October 27, 2004, the UN announced the creation of a new kind of rapid action force designated as the ‘cultural blue beret’, to step in wherever art treasures are threatened by armed conflict and natural disaster.

The formation of cultural blue berets, a novel initiative, came at the right time keeping in mind the ongoing armed-conflicts and civil unrests around the world, especially in Afghanistan and Iraq in recent past. Since the Gulf War of 1991, museums in Iraq have been fallen prey to large scale plundering. The last year’s looting of the Iraq National Museum in Baghdad and the burning of the city's libraries, major worldwide efforts have focused on rebuilding Iraq's cultural institutions and conserving damaged artefacts. In Afghanistan too, the Taliban's destruction of the Bamiyan Buddhas in 2001 drew international attention and called for action.

Even natural disasters like flood and earthquake can be as ruinous as any kind of violent human interference. The earthquake that struck the Iranian city of Bam where two-thousand-year-old mud-brick citadel fell or in Gujarat (India) where 80% heritage structures suffered some form of damage are the most recent examples. Fortunately, cultural blue berets have taken into consideration both aspects. The UN has signed an agreement with the Italian Government for the ‘safeguarding, restoration and protection of the natural and cultural heritage of countries affected by conflict or natural catastrophe.’ The agreement seeks the involvement of engineers, architects, archaeologists, art historians, seismologist, and art restorers in the illegal trafficking of artworks, depending upon the circumstances.

The cultural blue berets will initially be formed entirely of Italians since Italy was given the responsibilities for protecting and restoring Iraq’s cultural heritage after the establishment of a provisional government in Baghdad. Under the terms of the process, the government of the affected country will first contact UNESCO officials in Paris who would judge the intensity of the damage and decide on the urgency of the intervention, then they will get in touch with Rome to set up an ad-hoc team to be called Emergency Action Group – to deal with the damage or the threat.

The vital question is to what extent the cultural blue berets would be sensitive and committed to the cause of cultural heritage preservation and conservation. The increased incidence of atrocities committed by the UN peacekeepers hardly justifies their accountability for the cause. The reported incident of a mental hospital in Bosnia, guarded by the peacekeepers being turned into a hub of anti-social activities or the ‘frenzy looting‘ that took place in Liberia in 1996, where peacekeepers used UN vehicles to make off the pilfered goods, force us to rethink about the UN code of personal conduct of blue helmets—to respect and regard the human rights of all. Such type of reported incidences may be taken as the case of “rotten apples” that exists in every structure, but its still an issue of concern.

However, the contributions of the UN peacekeepers are highly commendable throughout human history, which is very evident in the fact that they won the Nobel peace prize in 1988. Starting from supervising cease-fires to help promote national reconciliation, even humanitarian tasks have quite often been brought under their purview. And they have proved themselves time and again. Under such circumstances, the effectiveness of cultural blue berets depends upon the willingness of the peacekeepers and the community participation of the concerned country. With Unesco’s Director-General insisting that the job of cultural blue berets is “ not only to prevent destruction but also to contribute assistance to reconstruction”, this could be a positive start. Italy has just made the beginning; it is not too long when we see other countries follow the path.