Ferocious or Benevolent Lions? Discourse on the National Emblem 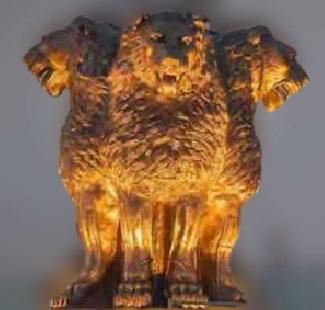 Whether the lions of Sarnath Lion Capital of Ashoka were ferocious or benevolent is one of the hottest political debates outside the Parliament by parliamentarians and representatives of political parties in India. It has already spilt over to the international arena as BBC carried the headline on July 12 that ‘National emblem: ferocious lions' statue on new parliament raises eyebrows’. Not only does it raise eyebrows, but the lions are trending fast and furious on social media, too, as ‘hindutva’s lions’, ‘menacing lions’, peace-loving lions, angry lions with their fangs as ‘unnecessarily aggressive and disproportionate’, and new India’s lions and so on.

Is this worth a justified debate or discussion? Or oppositions have repeatedly lost ground to raise some core issues Indians have been grappling with? Meanwhile, one aspect is affirmative that from angry Hanuman to smoking Goddess Kali and, on and atop Central Vista project (new facilities for India’s Parliament), free flow of debates and disagreements despite emblematic in nature are continuing with sometimes deplorable tone and tenure. It is irrational to assume that there has been no space for dissent in India since May 2014!

When the Prime Minister unveiled the Sarnath Lion Capital of Ashoka, the national emblem cast - 6.5-meter bronze installation, weighing 9,500 kg handcrafted by nearly 100 Indian artisans, atop the new Parliament building premises on 11th July, criticism was hurled by oppositions, experts, scholars at transforming the design of original lions of Mauryan, adopted as the national emblem in 1950, unilaterally. The original pillar is 7-8 feet, while the new erected cast is about 21 feet. The pillar, built by Ashoka, stands at the site of Buddha’s First Sermon, where he is believed to have shared the Four Noble Truths (the dharma or the law).

The criticisms are no less than romanticising fangs or no fangs, roar or snarl, peace-loving or war-mongering. Biologists/ conservationists who relentlessly work to conserve the big felines would be staring cluelessly at these debates. King Mufasa or Simba of the famous Lion King movie, Samson or Ryan of the Wild film or Leo the Lion of the famous Metro-Goldwyn-Mayer (MGM) studio logo would use their brute strength to protect their pride when required, not like dancing Alex- the lion of Madagascar movie series.

Arguably, the same passions of opposition, if put together, could have saved many valuable living beings like lions, tigers and other big and small wild flora and fauna in India and beyond, which are being illegally killed in their habitats and trafficked around the world. Loss of wildlife and its habitat is one of the critical stages in India. How often have we seen such passionate tweets or uproars by parliamentarians when poachers killed an elephant in Odisha?

For the unacquainted, the National Emblem consists of four Asiatic Lions standing back to back on a circular abacus. The abacus has sculptures of an elephant, a horse, a bull and a lion. Dhamma wheels separate these in between. The National Emblem stands on a full-bloomed inverted lotus flower.

While the acceptance of the national emblem is unanimous, its design and style have been the bone of contention. According to the union government, the concept sketch and process of casting the national emblem has undergone eight stages of preparation, from clay modelling/computer graphics to bronze casting and polishing. Additionally, the sculptor himself clarified that there had been no attempt to change the original emblem. If one looks attentively, it is the eyes, not the fangs! However, the State Emblem of India (Prohibition of Improper Use) Act (2005) and the State Emblem of India (Regulation of Use) Rules (2007) provide freedom to alter the design and its uses accordingly. Thus, it’s neither unilateral, at least not dictated by the Prime Minister, nor is warranted an amendment in the Constitution of India.

Four Asiatic lions appear in Sarnath's Ashokan pillar, displaying strength, courage, confidence and pride. Lions are natural predators. Without power, courage, and confidence, the elusive so-called peace can’t be restored and maintained in our present uncertainties. Let all Indians, including the carriers and defenders of the national emblem in their offices, vehicles and at least in passports and all secretariats and state assemblies, check once now if the lions have the strength to proclaim the power of the state draws from the Constitution of India? Or are there distortions in depicting the national emblem?

While Jawaharlal Nehru introduced the resolution on the national flag during the Constituent Assembly debate, he exaltedly mentioned on the wheel that the Ashokan period was essentially an international period of Indian history where India sent ambassadors abroad to far countries not in the way of an Empire and imperialism but as ambassadors of peace and culture and goodwill. The Ashokan pillar represents India’s sovereignty and its birth as a republic. Like the Ashokan pillars, the lions atop the temple of democracy (new Parliament edifice) have reiterated the arrival of assertive India in both domestic and foreign policies, not as a warmonger but as a messenger of peace and peaceful coexistence.

Nothing shameful about being confident.  Decolonising India's governance edifice is the most crucial aspect of installing the national emblem at the source of governance: Parliament in the National capital. Establishing Ashokan lions is a distinct and deliberate departure from colonial architectures erected by Edwin Lutyens and Herbert Baker in the 1920s by the central administration of India. Furthering the argument in support of India as a civilisational state, erecting the emblem atop fits the constituent of the government. Above and beyond, like under the Ashokan administration, the installation of lions atop new Parliament premises merely extends the conservation and protection of nature and natural surroundings as a high political agenda of India.