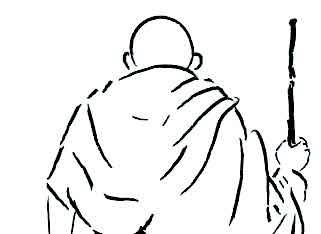 Mahatma Gandhi, the apostle of peace, had once advised Jews who were struggling in Palestine, ‘to convert the Arab heart’ by offering Satyagraha in front of the Arabs and by submitting themselves to be shot or thrown into the Dead Sea without raising a little finger against them’. Typically Gandhian, the advice was too idealistic to be practical for Jews and remained mostly unnoticed but it springs, as do all Gandhian ideals, from a deep belief in the power of truth and moral ascendance capable enough to unsettle any hardened oppressor. As for Jewish migration to Palestine during 1930s, Gandhi said it was ‘wrong to enter Palestine under the shadow of British gun’ because by doing so Jews were becoming ‘co-sharers with British in despoiling a people who have done them no wrong.’ (Harijan, September 26, 1938).

After more than half a century, Arun Gandhi, his grandson and head of MK Gandhi Institute of Non-Violence in South Memphis, United States has paid a visit to Palestine for the stated aim to ‘convince people of Mahatma Gandhi’s philosophy of peaceful resistance’. Few of the Palestinian left-wing NGOs and peace groups, people who have been persuading Palestinians to initiate non-violent struggle for freedom for years, have invited him to help launch a strategy of unarmed popular protest.

One of the basic components of Gandhian resistance or Satyagraha, (insistence on truth), is the mass involvement in politics. It is common knowledge that Mahatma is the man behind the introduction of mass politics in India during the independence struggle. The genius of Gandhi was indeed his resolve to remain ‘non-violent’ at all cost, under any circumstance. The idea is to convey the adversary of his own moral weakness for having taken resort to violence. To the critics, this method is too good to be true but under Gandhian logic, it is far too simple to remain unfathomable. A comparison of the two Palestinian Intifada would be imperative here to make the point clear.

The first Intifada, (literally, shaking off) started in 1987 and lasted for a full nine years. British scholar Edgar Balance perceives Intifada as the Palestinian rejoinder to Israel and US that they ‘couldn’t be written off so easily, and that they were not disappearing, spineless, lost cause’. Although not strictly Gandhian, these protests took the form of wide-scale civil disobedience, general strikes, a boycott on Israeli goods, graffiti and barricades. The televised pictures of young unarmed Palestinians throwing stones on Israeli armoured vehicles are still hard to shrug off even now.

In the ongoing Intifada, not only these young men are missing, but also the popular participation of civil society is negligible. Started with the visit of Ariel Sharon to Temple Mount in 2000, this Intifada has been based more on guns than on the power of popular unarmed resistance. The existence of these armed groups is the result of the Oslo Agreement when Palestinian security apparatus along with Palestinian ‘Self Rule’ came into existence. As of now, there are 16 to 19 Palestinian armed groups marauding as security police and these figures are in exclusion of Islamists like Hamas and Al-Jihad. It is indeed tragic that in the face of an unprecedented situation when they should be bargaining with Israel over the ‘Security Wall’, the Palestinians are brandishing their guns. The Palestinians do not seem to realize that this wall could, and in all probability would settle their border problems for them despite these guns.

The difference in terms of methods of resistance makes it evident that the former Intifada was more constructive and effective. It led Palestinians to Oslo where the two adversaries came to negotiating table for the first time facing each other. That the Palestinian ruling elites made a mess of that opportunity does not diminish the fact that it was a time of reckoning for Israel as well. The popular and to a large extent unarmed nature of resistance left the Israeli Defence Force completely at a loss for suitable response to quell it and had to undertake painful national security reappraisal.

It is this understanding of events by Palestinian peace groups that strengthen their resolve for peaceful resistance. The only problem with these groups is that they are still on the margins of mainstream politics. In the Middle East, though, Gandhi and his methods of non-violent resistance never attracted much interest that was evident even during Arun Gandhi’s visit as many people publicly disagreed with what he had to say. Yet there are important exceptions. Jawdat Said, an elderly Syrian, has been promoting his non-violent ideas since the 1950s and there are people like Imam Mohammad al-Shirazi, Khalis Jalabi and Khalid Khishtainy who call for Islamic non-violence in the region.

Fortunately enough, in the Middle East where one act of violence begets more violence, it is heartening to know that at least there exists a group of thoughtful Palestinians who are resorting to a method, which has a proven record of success against all odds of the human condition.