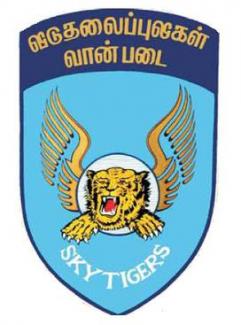 In an apparent change of war tactics, Sri Lanka's Tamil militant group, the Liberation Tigers of Tamil Eelam (LTTE), is now resorting to aerial attacks against government targets, a novel shift in the conflict that has ravaged the Indian Ocean island nation for three decades.

In what is regarded as the "Fourth Eelam War," at least three successful air raids have been carried out by the LTTE's Tamil Eelam air force (TAF) since 26 March, the date of the first such attack on the Sri Lankan air force (SLAF) base at Katunayake. The nighttime raid left three government soldiers dead and some 17 others injured. In the second successful airstrike on 24 April, the TAF inflicted extensive damage to a Sri Lankan army engineering unit in the Palali military complex, leaving six soldiers dead and a dozen others wounded. Once again the TAF returned to strike the Katunayake airbase on 26 April, likely in commemoration of the one month anniversary of the first successful airstrike. The 26 April attempt, however, failed.

Not deterred by the Sri Lankan air force's pledge to destroy the LTTE's air capability with the deployment of anti-aircraft artilleries, another air raid was carried out in the early hours of 29 April, when the TAF bombers targeted two oil storage facilities that cater to SLAF in Kolonnawa and Muththuraajawala areas. In this pre-dawn swoop, fuel facilities belonging to Indian Oil and the Dutch Shell were targeted successively, only hours after the SLAF's airstrike in the town of Kilinochchi - an LTTE stronghold.

The TAF's recent success notwithstanding, government troops have been engaging the LTTE with retaliatory mortar strikes in other theatres of conflict in the Vavuniya district, taking the clashes to a dangerous new level. A day after the second air attack by the TAF, on 25 April, Sri Lankan army troops claimed to have killed at least 20 Tamil Tigers in gun battles.

Even though the government claimed that the Tiger's air attacks inflicted little damage, the psychological advantage the LTTE has won has served to significantly boost the rebels' morale and could embolden them to step up attacks.

The recent developments make the LTTE the first militant group in the world to have an air force. The LTTE has lost some ground in the renewed conflict, which began in late July last year when government fighter jets targeted rebel camps around Mavilaru reservoir. Since then, the rebels have suffered several setbacks largely characterized by the loss of strategic hotspots like Sampur, Muttur, Amparai and Vakarai, exposing their genuine weakness against full-fledged military attrition. The air attacks, though carried out by a relatively unsophisticated air force, likely represent the LTTE's attempt to regain some of its credibility lost with its hallmark guerilla warfare and suicide bombing tactics.

Initially, it was believed that the TAF did not have first strike air capability and that its air defences were obsolete. However, it is now clear that the rebels have not only the capability to penetrate SLAF air defences but the capability to attack the heartland and return safely to their secret airbase with impunity as well. The only possible limitation so far demonstrated is perhaps the fact that all the LTTE's air raids have been conducted under the cover of night. Since 1995, the LTTE has been trying to build an effective air force with flight-trained Tigers (also known as Vaanpuligal) under a former Air Canada aeronautical engineer known as "Sornalingam," and also under the alias of "Shankar." Before the late March airstrike, the TAF reportedly displayed its air prowess only during the rebels' martyr's day commemorations.

The TAF, reportedly operating from Vanni and other secret airstrips within rebel strongholds was believed to consist only of light propeller planes assembled from pieces bought from Indonesia by the LTTE's naval wing and some from a South Africa-based flying club, later smuggled into LTTE-held territory. Reports suggest that the TAF now has a couple of Cessna and Czech-built Zlin Z-143 aircraft, a Swiss-built Pilatus turbo training aircraft and possibly a Robinson Astro-44 chopper in its arsenal, all modified for their purposes.

In comparison, the Sri Lanka air force's strike capability is tangibly much more powerful than the TAF's with at least seven Kfir C-2 Interceptors, Shenyang J-7s and four MiGs deployed in Katunayake airbase. This could be a plausible reason for the TAF to unleash surprise nighttime attacks on the airbase only to destroy the SLAF's intercept capability.

Indeed, the TAF air attacks set a dangerous precedent in the region where many like-minded militant groups are fighting for their own subversive agendas. The LTTE is believed to have logistical and other linkages with the India-based United Liberation Front of Assam (ULFA) and the left-wing extremist (Maoists) elements operating in the country.

Fears are growing within security and intelligence establishments in the subcontinent, especially in India. If the LTTE can have penetrative air squadrons, others could follow suit employing similar stealthy methods. Moreover, there are fears that the LTTE could eventually attack strategic installations on India's southern coast, although these fears are remote at present, given the LTTE's proven reluctance to provide India to enter the fray.

However, these speculations aside, with the Norwegian brokered ceasefire in tatters since mid last year, the island nation is certainly bracing for a more violent conflict in the months ahead, as the rebels bask in a newfound high.

Author Note
Animesh Roul is the Executive Director and Co-founder of Society for the Study of Peace and Conflict.
Tags
LTTE, Sri Lanka, Armed Conflict