The Risks We Run: Mining, Communities and Political Risk Insurance 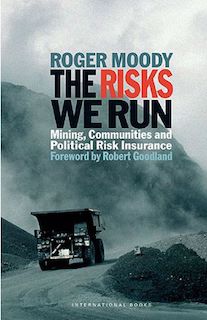 North-based Industries are in the opinion that the Southern Hemisphere is not conducive for investment. The reason is the involvement of risks such as localized-small intensity conflicts, political violence such as civil unrest, revolution, uprising, terrorism, insurgency and sectarian violence, which are mushrooming mostly in Asia, Africa and Latin America. This fragile-unstable governance situation creates a hurdle in the process of 'business as usual for the mandarins of market economy and globalization. To avoid the loss of investment, the private companies seek pre-cautionary approaches in terms of commercial and political risk insurance and export credit guarantee.

Political risk insurance (PRI) has become an essential but indispensable part of business in the era of globalization. In simple terms, PRI compensates companies for lost assets when operating outside their own countries - providing protection against risks. However, insurance providers and their beneficiaries are relatively unknown to the general public. In all probability, The Risks We Run, an engaging, well researched, seminal book, must change people's perception of risk insurance, especially in the mining sector. Roger Moody, the author, exposes the complexity of the world of PRI. He sees PRI as a conspiracy to protect assets that should be surrendered to their true owners - the local people.

The book does not give the impression to be a critique of PRI, but it deals with the role of PRI in securing financial support for large mining projects despite their serious social and environmental consequences for the communities. The author said in a Media Workshop on Multilateral Development Banks, held in Hyderabad in April, that while PRI is provided to large scale mining industries which have been actually increasing the risks to neighbouring poor communities, the poor communities are not receiving the same for the ill-effects of these extractive industries.

As PRI is usually a condition of export credits, Moody outlines the context of export credit agencies, including the World Bank's Multilateral Investment Guarantee Agency (MIGA) and America's Overseas Private Investment Corporation (OPIC) and Ex-Im Bank and the Export Development Canada (EDC). The financial backing from these institutions is equivalent to global development aid. However, for the last five years, these institutions have been under the scanner for the violation of human rights and damaging the environment.

The book raises critical questions about the policies of the World Bank Group's MIGA and the International Finance Corporation (IFC) and national export credit guarantee agencies with respect to environmental and social assessments and access to information. The several case studies in the book show that MIGA, IFC and other financial agencies lack the capacity and expertise to monitor regularly the implementation of the projects they have backed. They have repeatedly concealed important information about the environmental risks associated with particular mines from the public.

Besides these public institutions, there are several private sectors that are heavily involved in mining insurance in general and PRI in particular. The US-based company Marsh & McLennan claims itself as the world's number one risk specialist and American International Group (AIG) is a major player providing insurance cover for mines. The book explains that these private insurance companies are often even less accountable providers of PRI than national or multilateral agencies. Even, the services of risk consultant companies, like the UK based Control Risk Group, are being sought for advice by the mining industries. Now, for the smooth operation of the mining industries in the Indian Subcontinent, the risk-analysis consultant groups are mushrooming in India to advise the mining industries while ignoring the ill effects to the communities. By analyzing the protracted risks or threats, everybody is minting money except the affected communities!

In the first part of the book, the author explains the technicalities of PRI and how it has been used as a political tool. The author also explains why the 'PRI is a chimaera'! The second part of The Risks We Run contains six accounts of powerful testimony to the damaging effects of extractive industries on local communities. It comprises case studies of six mining cases backed by political risk insurance: Grasberg (West Papua), Omai (Guyana), Kumtor (Kyrgyzstan), Lihir (Papua New Guinea), Yanacocha (Peru) and Bulyanhulu (Tanzania). These case studies are written by the community representatives, lawyers and NGOs who have been fighting for justice from these extractive industries.

The Risks We Run is a must-read for campaigners, human rights activists as well as researchers and academicians in India. The history of extractive industries has a bad reputation in India by flouting environmental and social responsibilities. In the present context, while State governments of Orissa, Jharkhand and Chhattisgarh are wooing investors for the exploration of rich minerals at the heart of tribal lands and private risk-consultant groups are hell-bent on advising the investors, this book will give an opportunity to the common man to evaluate the structure, process and outcome of those mining industries.

Reviewed by: Avilash Roul, Society for the Study of Peace and Conflict, New Delhi