From Non-alignment to Strategic Stabilizer: The Indian Mind is Getting De-cluttered in an Evolving Global Dis-order 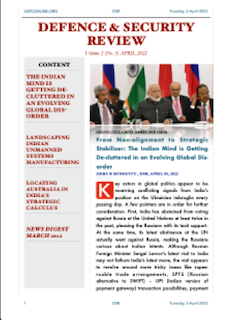 Key actors in global politics appear to be receiving conflicting signals from India's position on the Ukrainian imbroglio every passing day. A few pointers are in order for further consideration. First, India has abstained from voting against Russia at the United Nations at least twice in the past, pleasing the Russians with its tacit support. At the same time, its latest abstinence at the UN actually went against Russia, making the Russians curious about Indian intents. Although Russian Foreign Minister Sergei Lavrov's latest visit to India may not fathom India's latest move, the visit appears to revolve around more tricky issues like rupee-rouble trade arrangements, SPFS (Russian alternative to SWIFT) – UPI (Indian version of payment gateway) transaction possibilities, payment facilitation of USD 1.3 billion 'committed liabilities' (Indian milestone payments) for past military hardware purchases or even a probable Rupee-Yuan-Rouble model to dodge possible sanctions. Vocal criticism notwithstanding, India has been toying with different possibilities to maximize its economic interests and mitigate resultant risks from war.

Second, India's approach toward the Ukraine situation in the past few weeks has baffled at least four major players – US, EU, Russia and China – in different ways. In the diplomatic domain, India's position has been steadily ambivalent from the beginning – a source of major discomfort for all players, except for Russia. During the initial days, US and major European states had pleaded with India to play an active role in diffusing the conflict situation by speaking to Russian President Vladimir Putin, with whom Indian Prime Minister Narendra Modi enjoys a very cordial personal relationship. Modi spoke to both Putin and Ukrainian President Zelensky on different occasions. However, talks revolved around evacuation mechanisms and humanitarian assistance with Zelensky and adhering to peaceful resolutions through negotiations with Putin. As time passed, pleadings by the US started turning into assertive yet shuttle threats like branding India's stand as 'shaky' by the US President Joe Biden or 'there will be consequences for countries that actively attempt to circumvent or backfill sanctions against Russia' by the visiting US Deputy National Security Advisor Daleep Singh. In between, foreign ministers of Australia, the UK and other countries have shown regrets over the Indian approach. China has kept mum on India all these weeks, while its foreign minister Wang Yi recently paid an unscheduled visit to India. Again, India's stand on Ukraine has been interpreted differently by different players, to say the least.

Third, while Indian foreign minister S Jaishankar has been vocal throughout in rebutting Western position by asserting India's position as consistent and based on sound principles, he has been equally brutal in reminding the West about Europe's continuing energy purchases and mincing no words in conveying the Chinese Foreign Minister that unless border issues are resolved, India will not budge from its stated position. The Indian central bank and Ministry of Finance have been toying with different ideas and mechanisms to manage larger economic fallouts and financial transactions with an increasingly isolated Russia in the domestic sphere. West appears furious when it gets to know that unpolished Russian diamonds are finding ways into India, in which payments are made in Euro or when Russia offers India a discount of up to 35 percent from the market price on oil. The fact is that unless sanctions are circumvented with concrete evidence, there is little that the West can do to countries like India. China's avowed opposition to Western stance on Russia as well as bitter criticism of Quad by a new nomenclature 'Asian NATO' has become headaches for the US and others. When the West argues that Russia would not be a reliable supplier of military hardware or take a definitive stance against China in case the India-China border standoff turns further complicated, or for that matter, China would pay a heavy price if it supports Russia in any eventual confrontationist scenario, India has tacitly conveyed to the West that neither it relies on Russia for any support nor it cares much about threats from China.

It is interesting to observe that while the geo-economic, geo-political and geo-strategic scenarios are getting murkier in coming times with chaos overwhelming the current fragile global order, where power calculations and equations are going haywire with no clear picture emerging, India's stance, actions and intents are getting de-cluttered. Its stance is clear: it wants peace through a peaceful resolution to the Ukrainian conflict through dialogue. Its actions are pragmatic: while it loses no time in sending goods for humanitarian purposes, it is preparing for meeting the economic consequences of war through pragmatic steps. Its strategic intents connote clarity in the otherwise grey zone of geopolitics: it intends to play an autonomous role and is not afraid to succumb to pulls and pressures; it is flexible enough to change course as and when required, and it is determined to protect its national interests. Symbolic or otherwise, Prime Minister Modi's call for Atmanirbhar Bharat (self-reliant India), call for deepened regional cooperation (reference: Modi's address to BIMSTEC meet recently), and call for preparing the country to face unintended consequences of the global disorder are evidence of an India, who is not hesitant to abandon non-alignment but eager to embrace a quasi-alignment model, where Modi can call Putin a true friend, dodge Biden's bitter words through Jaishankar's vociferous defence and maintain composure vis-à-vis Xi Jinping.

A de-cluttered national mind has already moved from non-alignment. It may probably attain a great power status in coming times through indigenous might from within and a strategic stabilizing player from without. Ukraine's situation provides a fertile ground for validating India's global power ambitions.

The article is part of  "Defence and Security Review", Volume 2 (No.3), April 2022. Also, in the issue,  Brief No.1: "Landscaping Indian Unmanned Systems Manufacturing" and, Brief No.2: "Locating Australia in India's Strategic Calculus."

For Complete Document Read Here (PDF)
Author Note
Deba R Mohanty is a founding member and Vice President of the Society for the Study of Peace and Conflict, New Delhi. He is the Editor of the 'Defence and Security Review' (DSR).
Tags
India, Ukraine, Russia, NATO, Non-alignment