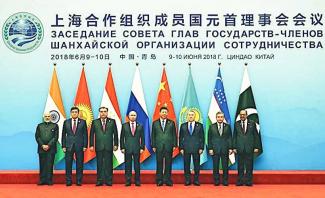 Shanghai Cooperation Organisation (SCO) grew out of the Shanghai Five, a grouping consisting of China and its post-Soviet neighbours (Russia, Kazakhstan, Kyrgyzstan and Tajikistan) formed in 1996 in order to reduce tensions along the nearly 7,264 km long border. In 2001, when the formation of SCO was announced, the geopolitical situation had changed as North Atlantic Treaty Organization (NATO) expanded eastwards, incorporating former Soviet allies of the Warsaw Pact and used military force in former Yugoslavia in the name of ‘humanitarian intervention’ despite opposition from Russia and China. Since then, SCO has functioned as a counterweight to NATO in the Eurasian region, also including security, counterterrorism, energy and economic issues in its agenda. It also expanded further when India and Pakistan became full members in 2017 (Uzbekistan was founding member in 2001) and four other countries (Mongolia, Iran, Afghanistan and Belarus) joined in as observers.

The 18th meeting of SCO was held at Qingdao, Shandong, China on 9-10 June this year (2018). After the new United States (US) administration of President Donald Trump took office in 2017, the US’s commitment to ‘liberal international order’ seems uncertain. The foreign policy too looks unpredictable, contradictory and incomprehensible, thereby causing much worry to friends as well as adversaries. The SCO meeting thus assumes lot of significance in this context, because one of the goals of SCO is to establish a multipolar international order, for which weakening of ‘American hegemony’ on security alliances, international economic institutions and other hard and soft power resources is necessary. SCO can take advantage of Trump’s policies by developing partnerships with estranged US allies and gaining leverage on many important issues.

The position of India, a new member, is peculiar. On the one hand, India has a broad consensus with Russia and China on the multipolar international order, trade and environment policies, non-interference in domestic affairs of sovereign states by outside powers and independent foreign policy. But on the other hand, India has strong relations with the US and its allies to maintain balance of power in the ‘Indo-Pacific’ against a rising China. Besides, India also has bilateral disputes with China on border, trade deficit and China-Pakistan Economic Corridor (CPEC) that violates India’s sovereign right in Pakistan Occupied Kashmir (POK). The dispute over CPEC was on full display at Qingdao, as India refused to endorse the Belt and Road Initiative (BRI), of which CPEC is a part, in the joint declaration. On the issue of terrorism also, India has reservations with China, since Pakistan, the closest strategic ally and ‘all-weather friend’ of China, harbours, trains and funds terrorists operating in India, especially within the state of Jammu and Kashmir. China refuses to criticise Pakistan. Instead, it considers the peaceful and democratic Tibetan refugees and their spiritual leader Dalai Lama as one of the practitioners of the ‘three evils’(terrorism, separatism and extremism) and pressurises India to restrict their activities in Indian territories.

Despite these disagreements between China and India, the SCO Summit has achieved success on a number of issues. The Qingdao Declaration (9-10 June 2018) approved ‘A Plan of Action for 2018-2022 to implement the Treaty on Long-Term Neighbourliness, Friendship and Cooperation between SCO Member States’. It also advocated ‘settlement of crises in Afghanistan, Syria, the Middle East and the Korean Peninsula’ according to international law and ‘implementation of the Joint Comprehensive Plan of Action on the Iranian nuclear programme’. So, there is a clear disagreement between SCO and US on Syria and Iran. Even India has common strategic interests with Iran on supply of energy resources, development of the Chabahar Port and linking it with Afghanistan and Central Asia, North-South Transport Corridor, linking Mumbai and St. Petersburg, and opposition to Taliban in Afghanistan. The Trump administration’s withdrawal from the Iran nuclear deal provides an opportunity for SCO to find common ground with the European Union (EU). It will be in India’s advantage if sanctions are lifted against Iran.

On security and counterterrorism, the Qingdao Declaration reiterated SCO’s commitment to combating ‘terrorism, separatism and extremism’, strengthening Regional Anti-Terrorist Structure (RATS) and support for UN Comprehensive Convention against International Terrorism and Code of Conduct to Achieve a World Free of Terrorism. India could not achieve anything specific on cross-border terrorism sponsored by Pakistan, a goal which in itself is unlikely at SCO now that Pakistan is also a full member. It will be interesting to see in future how SCO deals with separatist movement in Jammu and Kashmir with both India and Pakistan as members. However, it will be an opportunity for India to get support from SCO on Jammu and Kashmir based on the latter’s definition of ‘three evils’ – terrorism, separatism and extremism.

Besides, there were many agreements related to trade, environment, health, education and other socio-economic issues, including a desire to establish Development Bank of the SCO and the SCO Development Fund. Already, with the leadership of China and participation of both India and Russia, two banks, New Development Bank (NDB) and Asian Infrastructure Investment Bank (AIIB), have been established. SCO bank would further strengthen the alternative economic mechanism against Bretton Woods Institutions, led by the US. Only on BRI, India has dissented as it violates India’s territorial integrity in Jammu and Kashmir. The CPEC part of BRI violates SCO’s own principle against ‘any act intended to violate territorial integrity of a State including by annexation of any part of its territory’.

Thus, it will be wise on the part of China to respect India’s territorial integrity in Jammu and Kashmir and also contain Pakistan’s cross-border terrorism, ensuring India’s support for China’s leadership in regional organisations such as SCO and BRICS and participation in BRI. India, based on its strategic interests, needs to maintain balanced relations with the great powers -- US, China and Russia -- and not commit to any power bloc. Prime Minister Narendra Modi’s diplomacy has been deft, maintaining friendly relations with the great powers and working together on mutual interests, without compromising India’s commitment to its sovereignty, territorial integrity and fight against terrorism.