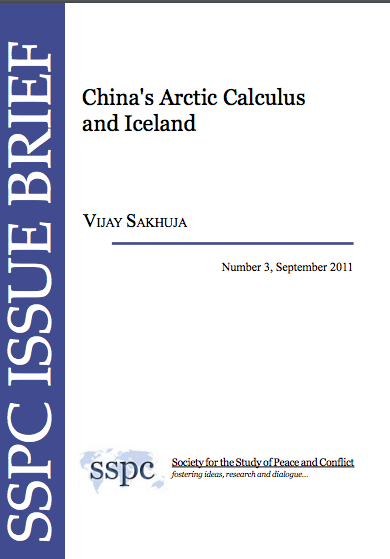 Beijing has begun to play a proactive role in the affairs of the Arctic seeking permanent observer status in the Arctic Council and has also made strong overtures towards some of the Arctic states by extending its domain and influence into the region through its assiduous diplomacy and grand strategy to nurture and sustain cordial bilateral relations. The economic bailout package and the speed with which China salvaged Iceland when its economy was on the verge of collapse have created a new constituency in Iceland government circles who look at China favorably.

China's motivation for the nurture of its relationship with Iceland also emerges from the strategic rationale to find a foothold along the trans-Arctic-Atlantic shipping route between Asia and Europe/North America in case the Arctic becomes navigable for longer durations through the year. China also rationalizes its interest in the Arctic route with the fact that it is able to overcome the insecurity to its Sea Lines of Communication (SLOC) in the Indian Ocean. It is estimated that the Northern Sea Route (also referred to as the Arctic Golden Waterway) has the potential to save nearly $60- billion to $120-billion annually.32 The Chinese scholars have urged the government to play a proactive role in Arctic affairs, but the official view is that it would cause alarm in other countries.