The “Myth” behind China’s Territorial Claims: Fabrications in Northeast India

The regions of ‘Monyul’, ‘Loyul’ and ‘Tsayul’ (present Arunachal Pradesh state in India --see Figure I) claimed by China as under ‘illegal’ occupation by India are located beyond the watershed of the rain-fed tropical Indian Eastern Himalayas, which are thickly forested borderlands inhabited by non-Tibetan and non-Buddhist ethnic groups. Historically, the terms ‘Monyul’, ‘Loyul’ and ‘Tsayul’ refer to Tibetan allusions to regions beyond the frontier. The Tibetan authorities did not have direct administrative control over these southern regions. China’s claim to ‘customary traditional border’ was non-existent in these areas since ancient times and is a later day imported concept of the modern state. Many ethnic groups in Northeast India are under implied threat as a result of China’s vaunted claims to the ‘customary traditional border’. The security situation in Northeast India has escalated due to Chinese military and civilian activities at the Line of Actual Control (LAC). 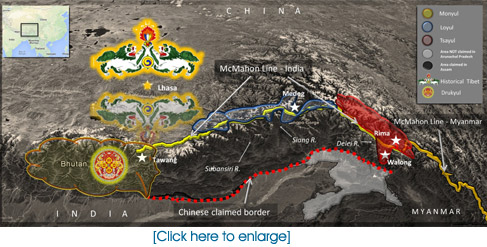 During his recent visit to China, Prime Minister Narendra Modi reiterated India’s proposition on clarifying the LAC and called upon the Chinese leadership to reconsider their approach2 on issues that are holding back the full potential of the bilateral relationship. In response, Huang Xilian, the senior official in the Asia department of the Chinese foreign ministry, commented that China is keener on establishing a “Code of Conduct (CoC)” in the border areas with India instead of issuing clarification since China views the first approach as more apposite to maintain peace and tranquility at the border. Indian National Security Advisor (NSA) Ajit Doval followed up highlighting China’s double standards vis-à-vis the McMahon Line with India and Myanmar for the settlement of the international borders of these countries with China.3 The Chinese response has been its usual stated position that the McMahon Line is ‘illegal’ in China’s official lexicon.4

Zooming in on Chinese positions

That China recognized the validity of the eastern end of the McMahon Line as the basis to delimit a section of the Sino-Burma border in the boundary agreement with Myanmar can easily be seen by the facts on the ground (see Figure II) as well as the documentation of the Sino-Burma Boundary protocol5. So while China has always rejected the McMahon Line as a ‘product of imperialism’ and insisted instead on a sacrosanct Chinese ‘traditional customary line’ vis-à-vis India6, the Sino-Burmese Boundary Agreement stands in contradiction to China’s official position. 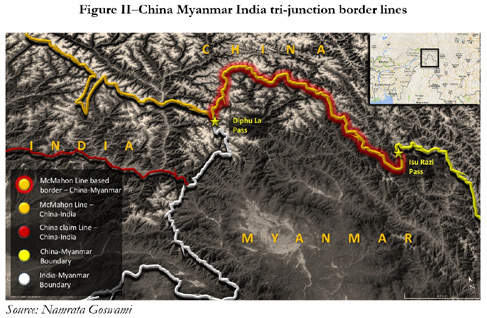 Prior to the Sino-Burmese Boundary Agreement of 1960, the Chinese ‘traditional customary line’ ran much to the south of the McMahon line in Myanmar, where China claimed 200,000 square kilometers of Myanmar’s territory of what was called as the ‘Triangle Area’7 (see Figure III). Fortunately, independent Myanmar could retain its actual borders almost intact by giving away three Kachin villages7 in that disputed section to China for the Chinese acquiescing during boundary negotiations to reconsider the McMahon Line as the agreeable alignment of its ‘traditional customary line’. 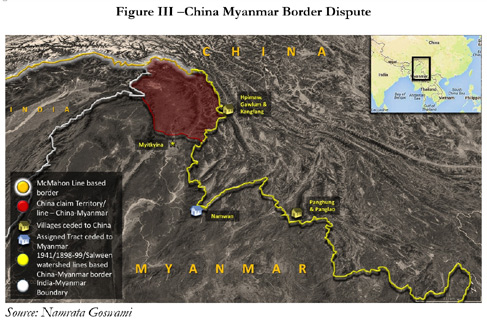 The Agreement Protocol reads further to show that the major section of the boundary delimitation (see Figure III) uses another ‘unequal treaty’ as evidence,9 i.e. the British created line of 1941, which was agreed upon between China and the then British ruled Burma. That said, the Sino-Burmese Boundary Agreement does not explicitly verbalize the ‘unequal treaty’ and rather uses the term ‘traditional customary line’ as a posturing compliance with China’s official position of declaring all ‘unequal treaties’ before the PRC was established as null and void. Similarly, the term ‘McMahon Line’ was replaced with ‘traditional customary line’ in the terminology of boundary delimitation and agreement. The genesis of modern Chinese claims to ‘traditional customary lines’ in Myanmar lay in China’s pre-republic as well as imperial territorial notions of borders showing the extant of Chinese territory. In India’s Northeast, rebuffing the alignment of the McMahon Line, China’s ‘traditional customary line’ and consequent claims to Indian Territory is perplexingly based on another British ‘product of imperialism’. It is interesting to highlight that the Chinese claimed ‘traditional customary line’ running along the foothills of the Himalayas is exactly identical to the pre 1914 unilateral and random British outer line10 drawn to suit the imperial administrative purpose in Assam (See Figure IV). 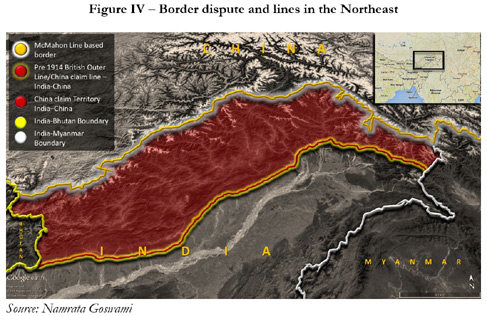 China’s game plan behind the posturing

The fact that China would derecognize the McMahon Line to consistently lay claim to territory in the Northeast fabricating another imperial British created line as the ‘traditional customary line’ speaks volumes of a larger game plan. The overriding analyses is that while the military gap between India and China increases progressively, the Chinese delaying tactic is to decide the argument on territorial disputes in the Northeast in their favour when China can dictate terms. A corollary on a national scale to this statement would be that China is purposefully keeping the Northeast border in a state of prolonged and active dispute in order to gain leverage over India and keep it on leash. The numerous rounds of border negotiations have achieved little till date due to larger geopolitics overriding final border settlement. As China’s Deng Xiaoping had famously once stated to put off resolution of the border dispute 'for future generations to resolve', sums up the real Chinese attitude.11 Despite Modi’s assurances that clarifications of the LAC need not necessarily prejudice both countries’ stated positions on the border,12 and is critical to remove uncertainty with regard to border skirmishes, the Chinese side’s disinterest plausibly indicates a strategy to keep the border intrusions option open in order to stake claims on Indian Territory. Hence, China is pushing for mechanisms like the CoC to ensure that the Indian side avoids escalating the conflict when Chinese troops routinely intrude into the Indian side of the LAC. China’s game plan vis-à-vis India seems to be border coercive military manoeuvres and intimidated geopolitics. Indian military analysts have war gamed these scenarios,13 which include a two front war on India by China. This scenario has grave implications for the Northeast 14 where Chinese military could cut off the ‘Chicken’s Neck’ Siliguri corridor and invade the Eastern sector of the LAC to militarily annex China’s disputed territories in India with the added benefits of securing Tibet’s flank, easier access to Myanmar and direct land access to Bangladesh. This is of course a worst case scenario but something that the strategic planners cannot ignore given the reality of Chinese territorial claims. The Indian Defence establishment has prepared itself at multiple front war scenarios with combined synced operations and exercises involving all the three armed forces. Tibet has remained top Chinese security priority15 and the border dispute with India is now a ‘core national interest’ of China.16 If the Chinese pursuit of ‘core national interests’ in the East China Sea and the South China Sea are any indications, the elevation of China’s territorial claims in the Northeast amongst others is a worrying development. There have already been indicators of updated Chinese policies with the latest official map17 of China showing large chunks of Indian Territory, especially in Arunachal Pradesh, inside that country’s borders.

The bilateral relationship between India and China is much more complex and multi-faceted today and elicits resolution strategies from the straight out simplistic18 to the near irreconcilable19. And after years of negotiation on the border issue laying out facts on the table as outlined earlier will not simply cut it to have the desired effect in cranking out a mutually acceptable resolution. India needs to think out of the box in reinventing its relationship with China, which can propel the Chinese on the ground in a positive direction to settle the boundary in a time bound schedule. NSA Doval is spot on that we ‘need a larger plan to resolve issues with China’20. India will have to expand and build options of leverage to motivate China enough to go for a fair and reasonable solution to the boundary issue as articulated by the Chinese leadership.21 As an illustration of quid pro quo, India can play up China’s insatiable push for Silk Road connectivity like offering the shortest overland route from Sichuan to Assam in return for an agreement to leave India’s Northeastern borders intact. China’s actions clearly show that while carrying on negotiations with India for tactical reasons to delay an understanding for a China favourable resolution, at the strategic level, China will continue to visibly demonstrate its claims on territory to keep the pressure on India to remain cautious and delay its own ambitions /aspirations of being a major power in Asia. As from China’s strategic viewpoint, memories of the 1962 border war and the perceived strategic vulnerability that India faces in Northeast India vis-à-vis China is India’s Achilles heel to be exploited to keep the pressure on. And as Sun Tzu had said so many centuries ago: to use the enemy’s ‘weakness’ against itself is the best strategy.