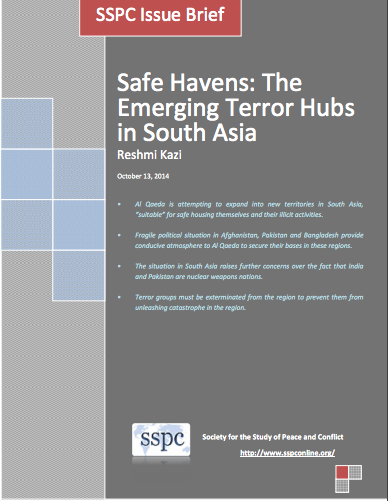 Al Qaeda is attempting to expand into new territories in South Asia, “suitable” for safe housing themselves and their illicit activities.  Fragile political situation in Afghanistan, Pakistan and Bangladesh provide a conducive atmosphere to Al Qaeda to secure their bases in these regions. The situation in South Asia raises further concerns over the fact that India and Pakistan are nuclear weapons nations. Terror groups must be exterminated from the region to prevent them from unleashing catastrophe in the region.

The term safe haven can have both positive and negative connotation. In a positive sense, it refers to an asylum or a sheltered place for refugees or displaced people or group(s) of people seeking protection from natural calamity, war crimes or genocide. According to the United Nations, an estimated 200,000 new refugees sought sanctuary recently in the Kurdish north from Islamic extremists.1 Those displaced are looking for protection from the ongoing atrocities committed on the civilians in the war-torn Iraq and Syria. But in the negative terms, save havens implies sheltered bases for terrorists and other perpetrators of crimes wherefrom they can plan, communicate, organize, recruit cadres, train them, raise funds, house their terror equipment, operate, transit and conduct their malicious agendas. Tribal regions of Pakistan's Federally Administered Tribal Areas (FATA), Khyber-Pakhtunkhwa province, Balochistan and some parts bordering Afghanistan remain safe havens for terrorist groups seeking to conduct regional and global attacks. This paper reflects on the negative concept of safe havens that are exploited by terrorists for their horrid intentions.

Author Note
Reshmi Kazi (Ph.D) is Associate Fellow in the Institute for Defence Studies and Analyses, New Delhi. She specializes in areas of nuclear non-proliferation, nuclear terrorism and nuclear disarmament issues. She completed her doctorate from Jawaharlal Nehru University, New Delhi. Her doctoral thesis is on ‘Evolution of India’s Nuclear Doctrine: A Study of Political, Economic and Technological Dimensions.’ Her latest monograph is “Nuclear Terrorism: The Grand New Terror of the 21st Century” (IDSA Monograph Series, No. 27, October 2013). She regularly writes for the ‘South Asian Voices’ portal at the South Asia Program of the Stimson Center, Washington DC.