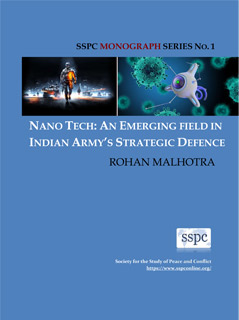 Technology has come to play a very important role in the conduct of International Relations today. Technology has in fact been a dominant factor in determining power of any country. With technology as a priority, diplomacy has evolved in dealings amongst states for mutual benefits and shared interests.

Diplomacy is an act of engaging with other nation-states in order to achieve mutual benefits for national interests and security. This monograph titled, “NanoTech- an emerging field in Indian Army’s Strategic Defence” focuses on the past research and developments done in the field of Nanotechnology and how this can help Indian Army in handling the nuances of the hybrid warfare which is mostly network centric warfare with chemical and biological warfare agents being the next future of warfare. The paper touches upon the annual budget allocated to Indian Army and discusses how and why Indian Army is accountable for providing defence and security to the nation.

Nanotechnology alone cannot handle this menace of hybrid warfare, but there should be a nexus of nanotechnology with Information Technology (IT), Artificial Intelligence (AI) and Biotechnology (BT). Thus, this monograph lays stress on importance of nanotechnology and where it can find its military utility with special emphasis on the risks associated with the technology. The main argument will be related to the case study of Indian Army’s use of Nanotechnology as a camouflage weapon for its own strategic defence.

Download (PDF): Monograph No.1, July 2019
Author Note
Rohan Malhotra is a mechanical engineering graduate and recently completed his masters in International Studies from Symbiosis School of International Studies, Pune. He was a Research Intern with Institute for Defence Studies and Analyses, New Delhi in Strategic Technologies centre. The author has been certified by UNPAN in Strategic Intelligence. Currently, he is working as a Business Analyst with MitKat Advisory Services Pvt. Ltd. in Mumbai.