War and Gender: How Gender Shapes the War System and Vice Versa 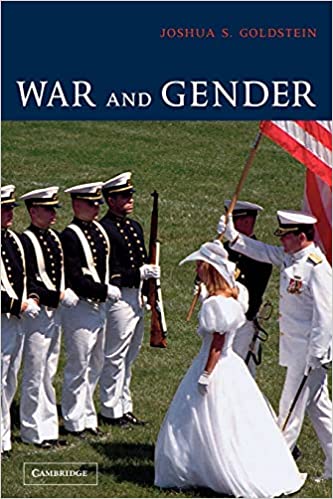 In almost all cultures and societies, the stereotypical vision of war has been persistent; women are supposed to be the outsiders of war. War is men’s business. They go to the front, do the fighting, take the risks and make the decisions. Women stay at home, take care of the children and keep the home fires burning, waiting for their soldier husbands to come home. In War and Gender, Joshua Goldstein attempts to address the “near-total exclusion of women from combat” over time and across cultures.

Goldstein begins by challenging the dichotomous construction of sex/biology (nature) vs. gender/culture (nurture), arguing that the two are “highly interdependent and that biology “provides diverse potentials”, while cultures “limit, select, and channel them.” He articulates this concept succinctly, “biology is diversity,” and demonstrates this variability across societies in detail in chapters two and three. Goldstein defines war as lethal inter-group violence and feminism as an ideology opposing male domination and promoting gender equality. He then reviews the historical record of men and women in war is simple and complex societies. He concludes that the cross-cultural consistency of gendered war roles is pervasive, albeit not quite universal; women have fought in wars but these women are (or are portrayed/perceived as) exceptions to the gender rule that men are warriors.

However, gender does not determine whether or not a person is an outsider of war. In different respects, women have always been part of the war. We can distinguish different roles such as camp followers (i.e. prostitutes, providing sexual services to the soldiers), nurses in combat, soldiers (in earlier times disguised as men), and finally as housewives and sweethearts waiting for the men back home. Some of these roles, in particular, have served as a support to war and militarism, above all their complementary roles of waiting wives and sweethearts.

In chapter three, Goldstein focuses on” Bodies”, that is, biological explanations of the “puzzle of gendered war roles”. And he concludes, “None of the gender differences is sufficient to explain the puzzle.” Therefore, he further emphasizes that gender exclusion from combat is by policy choice, not by physical capability; the evidence shows that women can and do fight.

In chapter five, Goldstein turns to “heroes”, that is sociological explanations of gendered war roles, and finds that gender socialisation---the construction of gender identity in a particular society---provides an explanation of the puzzle. War is constructed as a test or signifier of manhood/masculinity; victory is confirmation of male identity, defeat is emasculation. Femininity is constructed to reinforce the “man as warrior” construction, both in support roles as nurse, mother, or wife and in opposition as peace activists; all confirm militarised masculinity. Cultural views of femininity characterize women as naturally peaceful and non-violent. They also assign women to the private realm. Cultural views of masculinity assign men to the public sphere and positions of power. Hence men are responsible for all public affairs-in war and in peace, according to cultural gender constructions. Being mostly excluded from high-level politic, women have searched for other forms of political action. One such example is the women’s peace camp outside the US Air Force base at Greenham Common in Great Britain that existed from the 1980s until the beginning of the year 2000.

Goldstein briefly examines the proposed alternative to war in shaping masculinity, suggesting some hope for a way out of this seemingly inescapable nexus of war and gender. He returns to this theme of de-linking gender and war in the conclusion. The logic of domination has contributed to, as well as supported and maintained, patriarchy and its system of structural dominance, of which the war system is one important part.

In chapter six the author raises a rather disturbing question; ‘are women or men the main victims of war.’ Rather than challenging the dichotomous construction of direct vs. indirect violence, Goldstein focuses on the difficulty of quantifying the effects of war. We must understand how and why gender shapes violence in order to address it. Nevertheless, Goldstein’s conclusion, to which I agree, neither men nor women benefit from war at the expense of the other….both genders lose in the process. In other words, in postmodern wars, there are no fronts, or to put in another way, the fronts are everywhere. The combatants are everyone, and no one is any longer protected from violence through being a civilian, independent of gender.

In the final chapter, the author concludes by saying, “Six cherished myths go down in flames.” Those are; amazons did not exist; neither genetics per se, not hormones (male or female) nor male bonding nor women’s innate pacifism explains gendered war roles. Instead, Goldstein finds that the best explanations of the war-gender link are, ‘small, the innate biological difference in average size, strength, and roughness of play and cultural moulding of tough, brave men who feminize their enemies to encode domination.’

For more than 30years, women have been intensely re-envisioning femininity, and what it means to be a woman. I think that the same scrutiny should be applied to men. The feminist movement came into being because women were fundamentally in pain and unable to develop to their full potential. But, men are similarly, hampered by this masculine ideal, in which they are expected to repress their emotions. One of the major reasons, for many of the conflicts at present, is that we have, to greater or lesser extent ‘deconstructed’ femininity but we have done almost nothing to deconstruct masculinity.

Mahatma Gandhi, who was a great believer in harmonising and equalising gender relationships, persuaded men to cook, sew, clean dishes, knit, and do what is called, ‘women’s jobs. Was he not trying to deconstruct masculinity?