The enduring presence of the transnational Jihadi terrorist group Al Qaeda, the so-called vanguard of the global jihadist movement, reminds us of its stature, strength and resilience in the face of a decade-long concerted 'war on terror' against this group and its support system across the globe. Since the deadly September 11, 2001 attacks in the United States, the group's leadership strategically achieved relative success in expanding its physical infrastructure and ideological base. It did this by establishing regional affiliates, unifying militant factions and co-opting local militant formations primarily in Asia and Africa. While the group itself has been unable to stage violent, audacious assaults like 9/11 and has suffered massive setbacks through the years at the hands of the US-led international coalition, Al Qaeda Central (AQC) has managed to survive. The survival and longevity have been possible because of its increasing members and sympathisers, through its regional branches in the Arabian Peninsula and South Asia. 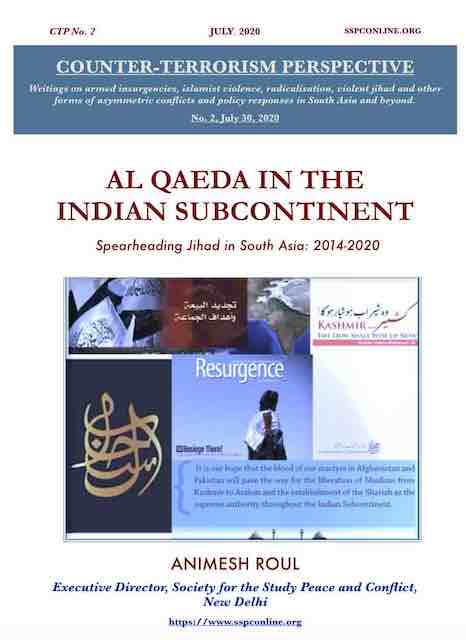 The youngest subsidiary of this group is the Al Qaeda in the Indian Subcontinent (AQIS), which is proving to be one of the most resilient regional affiliates of Al Qaeda. It has been proactive and influential in its virtual campaign in many countries in South Asia, primarily where there is a significant presence of Muslim populations, such as in India, Pakistan and Bangladesh. This paper explores the emergence and growth of AQIS over almost six years of its existence starting from September 2014 through June 2020.

It also examines how AQIS strives to influence the jihadist movement in the region to achieve its core objectives. Further, it will explore AQIS' expanded geographical scope in which Afghanistan and Myanmar (Burma) will be included in its supposed domain of influence and operation. In order to understand AQIS' resilience and intermittent resurgence, it is imperative to study its organisational structure, leadership, internal hierarchy, ideological motivation, both short and long-term goals and operations that are driving its expansion targets, tactics and strategy. To effectively analyse AQIS' strength and threat perception, this paper has delved into its relationship with local subsidiaries and inspired militant groups. There is a particular focus on India, Pakistan and Bangladesh, for a broader understanding of how and to what degree AQIS exercises command and control over its expanded structure. Finally, the paper looks at the group's outlook and what the future holds for AQIS.

AUTHOR's BIO: Animesh Roul is the Executive Director of the Society for the Study of Peace and Conflict, New Delhi. He specialises in counterterrorism, radical Islam, religious eschatology and issues related to armed conflict and insurgencies in South Asia. Roul has written extensively on these subject areas in journals and policy magazines including the CTC Sentinel, Jane’s Intelligence Review, and CBW Magazine, among others. He has been associated with the Jamestown Foundation (Washington DC) since 2005 as South Asia Counterterrorism analyst and regularly contributes to the Foundation’s landmark publications 'Terrorism Monitor' and 'Militant Leadership Monitors'.