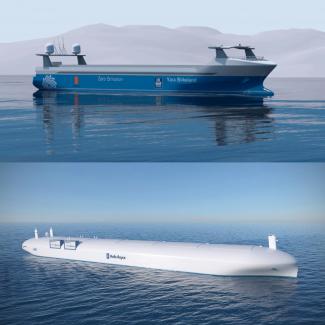 The maritime domain is witnessing phenomenal changes led by artificial intelligence, which have affected several facets of maritime activity including the humans that build and use these machines. One of the most notable developments is the arrival of autonomous vessels in the shipping industry, which would be crewless or semi-crewed, would navigate using onboard and offshore sensors through remote control, and discharge/load cargo using intelligent and smart machines.

Globally, at least four companies - Rolls-Royce Holdings Plc, BHP Billiton Ltd.,  Tokyo-based fertilizer producer Nippon Yusen K.K., and Yara International ASA - are investing in the development of autonomous ships. Kongsberg Maritime, a Norwegian technology enterprise is building Yara Birkeland, an autonomous electric-powered vessel capable of carrying 100 to 150 shipping containers, which will be completed by 2020. Another  Norwegian company called Massterly, a joint venture between the shipping group Wilhelmsen and technology firm Kongsberg, has announced plans to launch a ‘complete value chain for autonomous ships, from design and development, to control systems, logistics services and vessel operations’ later this year. This project will involve setting up infrastructure and services to manage and operate these vessels in autonomous mode.

Like any other vessel that operates at sea, an autonomous ship is bound by international regulations. International Maritime Organization (IMO), the primary regulatory body for international shipping, has designated autonomous and semi-autonomous ships as Maritime Autonomous Surface Ships (MASS). It has begun work on the MASS Code through a regulatory scoping exercise involving a number of issues, starting with the preliminary definition of MASS based on degree of autonomy vis-à-vis level of human interaction, into four non-hierarchical categorizations.

While these MASS regulatory initiatives are noteworthy, the real challenge before the IMO is to uphold the primacy of the safety of humans on these vessels, a feature found in majority of the shipping regulations. It is useful to point out that all MASS will not be free of man-machine physical interface; instead, they will have a mix of fully autonomous and partially autonomous interface for navigation and propulsion so that the vessels can be unmanned or operated remotely.

There are five significant issues for scoping regulations for MASS. Firstly, careful consideration is needed to avoid possible collisions while sailing. The seas are getting crowded and there are as many as 58,000 ships operating at a time. Despite advancements in navigation technology, most collisions take place due to human error and account for nearly 75 to 96 per cent of marine accidents. A collision between a crewed vessel and an autonomous one poses several legal challenges with regard to fixing responsibility for the accident.

Secondly, machinery failure in MASS can usually be addressed via redundancy but incidents like groundings, floundering, onboard fire, flooding of holds and issues of cargo management require careful deliberation while scoping MASS regulations.

Thirdly, the possibility of MASS hijacking through cyber-attack or by hacking into ship’s computers and servers (electronic charts, onboard navigation and propulsion systems, safety and security sensors, other devices and instruments) is also an issue. Cyber risks to maritime-trade ecosystem are real, with documented incidents of attacks on ports and shipping companies due to hackers successfully penetrating the networked computing systems. Similarly, the onboard Automatic Identification System (AIS) is vulnerable to ‘data manipulation’ and many ships have reported false identities. These security risks would need to be eliminated through anti-virus software, firewalls and hacking protection software.

Fourthly, the IMO has, in the past, successfully addressed and formulated common regulations to be applied uniformly across the industry. For MASS regulations too, it would have to keep pace with the rapid technological changes which are underway in the digital domain.

Finally, the issue of insurance and liability merits close attention while formulating MASS Code. A dialogue between the legal committee handling MASS and the insurance industry is critical in order to address risks emanating from MASS operations. As noted earlier, human error accounts for approximately 75 per cent of almost 15,000 marine liability insurance claims analyzed over five years, amounting to over $1.6 billion.

Industry experts believe that by 2025, remotely operated vessels will be out in open sea, and by 2030, unmanned ocean-going vessels could be very common. The $334 billion-worth shipping industry is also hoping to cut costs through the efficiency of these vessels and improve human safety due to errors.

The MASS Code is a significant development for the maritime trading ecosystem, but it must also address the issues of control like ‘fully autonomous operations’, ‘semi-autonomous operations’, and ‘remote controlled operations’. Reflection on the level of human intervention in these operations is also crucial, particularly when transiting through choke points and crowded shipping lanes. Additionally, it will be necessary to identify and promulgate important indicators about the presence of MASS to the regular ships in the area.