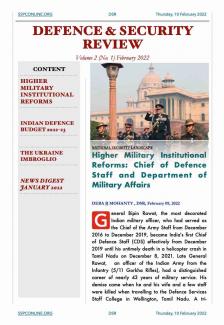 General Bipin Rawat, the most decorated  Indian military officer, who had served as the Chief of the Army Staff from December 2016 to December 2019, became India's first Chief of Defence Staff (CDS) effectively from January 2020 until his untimely death in a helicopter crash in Tamil Nadu on December 8, 2021. Late General Rawat,  an officer of the Indian Army from the Infantry (5/11 Gorkha Rifles), had a distinguished career of nearly 43 years of military service. His demise came when he and his wife and a few staff were killed when travelling to the Defence Services Staff College in Wellington, Tamil Nadu. A tri-Service Court of Inquiry investigating the crash ruled out mechanical failure, sabotage or negligence. It attributed the crash to the unexpected change in weather, resulting in pilot disorientation and the helicopter hitting a surface. The post of CDS has been lying vacant since the demise of General Rawat and is expected to be filled soon. As the CDS is expected to be appointed from the pool of serving or recently retired cadres, it is widely presumed that the current Chief of Army Staff General Manoj Mukund Naravane PVSM AVSM SM VSM ADC may succeed General Rawat as the next CDS in April 2022, announcement for which could be made shortly before his retirement.

Among the many important reform initiatives in the Indian military sector through the creation of new positions and departments, reviewing and changes in different rules and procedures, new policy announcements as well as proposed new structural arrangements in the last five odd years, largely implementing major recommendations made by Lt General D B Sekhatkar Committee, the Indian government has taken many bold new steps that were earlier either kept under the carpet or inconclusively deliberated for decades. Lack of political leadership apathy, inter-services rivalries, bureaucratic bottlenecks and pathetic civil-military interface are considered prime reasons for the non-implementation of reforms initiatives. At best, sporadic attempts had been made to inject incremental reforms till the current NDA regime decided to take bold steps to reform the Indian military sector. Ever since Sekhatkar Committee had submitted its recommendations in late 2016, most of these have been implemented in letter and spirit.

Proposals for the creation of new operational theatre commands (including one for the J&K) primarily through restructuring, continuous reviewing defence procurement procedure and manual, coming out with new defence production policy, additional policy-induced announcements, decision to offload a certain percentage of government stakes in defence public sector units (DPSUs) and listing them in the stock markets (all DPSUs are listed companies now), creating seven new corporate entities out of the earlier Ordnance Factory Board, all of which may also get listed in the stock market in near future and creation of CDS and Department of Military Affairs (DMA) under the Ministry of Defence are considered bold steps, which reflect the exemplary political will of the government of the day.

It is interesting to note that in a span of half a decade, the often pilloried DPSUs (especially the Hindustan Aeronautics Limited – HAL – which was in the news for all wrong reasons in 2015-16 when it was almost shut down because of lack of orders and inabilities to extract massive dues from the forces) has all started turning around and delivering results. While it has been making a range of military aircraft and helicopters, it will be an exporter of flagship indigenous brand fighter jet Tejas in the near future as at least a dozen countries have shown expression of interest in buying this 4th generation fighter. India had pursued (from 2005 till 2020) with an ambiguous concept called 'defence offsets' – starting with 'direct' to embrace 'indirect' offsets and coming out with several ambiguous data of its supposed success from government sources and sycophantic cheers from the industry and analysts – which now has been almost scrapped, ending an era of pursuance of academically fashionable policy with little practical results. Rather, various bold steps taken in the last five years on private participation in the national defence industrial eco-system by government-owned and private sectors are likely to bring better dividends than defence offsets.

Two major strands of self-reliance in defence – import substitution and making India a military exports hub – have been vigorously pursued with the result that at least 65 percent of India's defence capital expenditure budget is reserved for the domestic industrial sector, ensuring reductions in import bill (as announced in the Union Budget for FY 2022-23) on the one hand and signing a historic exports deal worth USD 375 million for supersonic cruise missile Brahmos with the Philippines recently with a possible follow-on order in pipeline. The supersonic cruise missile has received keen interest from not only the Southeast Asian region but also some important countries in the Middle East as well. India has strived hard to negate its earlier image of 'an arms merchant's paradise' to a formidable arms exporter. A USD 5 billion military exports target (by 2025) for the Indian arms industries has been laid out.

Dozens of incremental, structural and procedural reforms initiatives have occurred, as explained above, but the decision to create a CDS and a separate Department of Military Affairs are the two major initiatives of the current government that stand out with enormous national security implications. Although the Defence Minister now has three distinct single point advisors in the military (CDS), civil (Defence Secretary) and scientific (Chief of DRDO) domains, attempts are on to seamlessly integrate all three domains (including military-industrial) both vertically and horizontally. For example, one, two and three-star serving generals from the armed forces are now parts of DMA as Directors, Joint Secretaries and Additional Secretaries along with their civilian counterparts. All integrated institutions like Defence Intelligence Agency, Joint Commands, Strategic Forces Command, and a few multi-services agencies are now administratively under the control of the DMA. Although still evolving as a distinct institutions, the Department of Military Affairs and CDS have played a pivotal role in restructured national security architecture. The CDS is not only the Secretary of the DMA; he also serves as the Permanent Chairman of the Chiefs of Staff Committee (PC-COSC). Reforms in higher military organizations in India, among others, are evolving to address institutional rigidities and in the process, facilitate smoother decision making at the highest levels like Defence Acquisition Council (headed by the Defence Minister) and Cabinet Committee on Security (headed by the Prime Minister).

Members of the Constituent Assembly during the late 1940s had vociferously supported a militarily strong India with a strategic ambition to play a constructive role in global affairs. With limited resources and due to a variety of reasons, India chose to pursue its military prowess through state controlled military-industrial and scientific institutions, which produced average results amid sporadic military victories in the following six decades. It is only in recent times that the current regime appears all geared up to raise the profile of Indian military might to global standards largely through structural reforms, glimpses of which are already visible.

The article is part of "Defence and Security Review" Volume 2 (No.1), February 2022. Also, in the issue,  Brief No.1: "Indian Defence Budget 2022-23: Prudent use of Resources Lies at the 'Core' of Military Power" and, Brief No.2: "The Ukraine Imbroglio: Indian intents convey multiple messages".