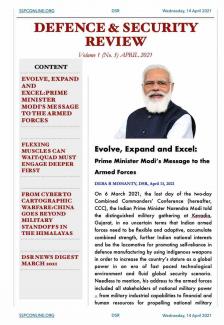 On 6 March 2021, the last day of the two-day Combined Commanders’ Conference (hereafter, CCC), the Indian Prime Minister Narendra Modi told the distinguished military gathering at Kevadia, Gujarat, in no uncertain terms that Indian armed forces need to be flexible and adaptive, accumulate combined strength, further Indian national interests and be the locomotive for promoting self-reliance in defence manufacturing by using indigenous weapons in order to increase the country’s stature as a global power in an era of the fast-paced technological environment and fluid global security scenario.  Needless to mention, his address to the armed forces included all stakeholders of national military power – from military-industrial capabilities to financial and human resources for propelling national military power.

Defence Minister Rajnath Singh and Chief of Defence Staff General Vipin Rawat also addressed the CCC, which was distinct from its previous editions on many counts with shuttle messages to stakeholders. First, the CCC, for the first time in its history, included the participation of junior and non-commissioned officers (known as PBOR – Personnel Below Officer Rank) in addition to the regular senior commanders, which itself is a significant departure from the past tradition. It also signifies the military’s acceptance of proposals emanating from political executives. This decision has received sporadic outbursts from some retired military officers, who term such a departure as ‘disruptive and disturbing’. Whether such apprehensions would worsen civil-military relations in India or the opposite remain to be seen. These are early days of national military transitions in most domains, all of which show mixed results thus far.

Second, for the first time, the CCC was held outside Delhi. Again, the military has accepted the symbolic change of place for all important events, an idea coming from the political executives again. Like the national events on military affairs as well as international military exhibitions (like DEFEXPO or AERO INDIA) are now slowly moving away from the national capital and held in places like Goa, Chennai, Lucknow and elsewhere. Lucknow was a serious candidate for hosting the recent edition of Aero India in February 2021, so Bengaluru may not be the only venue for aerospace exhibitions in future. It might lose this flagship event to either Lucknow or Hyderabad. Military events and programmes outside the national capital not only generate local enthusiasm but also enhance knowledge of the citizenry – a domain, which was hitherto reserved for upper echelons of the military and the state. Forget military matters, even debates on military expenditure or resources allocations, having direct links to the economic health of India, have not received adequate public attention or Parliamentary scrutiny.

Third, for the first time, the CDS General Rawat addressed a combined military gathering – the position created recently to bring in much desired joint-ness among armed forces as well as all spectrum military planning and as the permanent chairman of the Chiefs of Staff Committee (CoSC), to act as a single point military advisor to the government. It is quite interesting to note that, unlike other countries, Indian civilian leadership approved a four-star General as CDS, which should otherwise have been criticized by the retired generals across services. Interestingly, the military’s silent adherence to civilian propositions on reforms in higher defence management, again, signifies that the institution and its rigid traditional positions and responsibilities are slowly diluted to accommodate necessities of current and future times. The creation of additional divisions, senior positions, joint / tri-service positions has also happened without vocal opposition or adequate debate from the stakeholders.

Fourth, the Prime Minister stressed ‘the importance of enhancing indigenisation in the national security system, not just in sourcing equipment and weapons but also in the doctrines, procedures and customs practiced in the armed forces. He emphasized the need to optimise manpower planning in both military and civilian parts of the National security architecture. He also called for a holistic approach, focused on breaking down civil-military silos and on expediting the speed of decision-making. He advised the Services to rid themselves of legacy systems and practices that have outlived their utility and relevance. In a few sentences in his brief speech, he said it all – the military must evolve further, expand its strategic horizons beyond national borders to play the role of a global strategic stabilizer and excel in its warfighting capabilities in tune with times.

Military institutions are built on strong and exclusive principles and thus are designed to operate in silos, susceptible to outside influence, especially from the civilian bureaucracy and political executives as well as fiercely protectionist about the sanctity of the institution. Not only the Services, but all other elements like military industries or military R&D institutions also operate in silos, leading to a situation where seamless horizontal interactions are missing, lack of which are reflected in inter-services rivalries, unhealthy civil-military relations and an autarkic S&T and military-industrial models.

Even when there are signs of changes either in ideational or formal terms, the bulk of the serving officers resist changes from within, while retired military personnel get bitterly critical of changes in the public domain (reflected in media or elsewhere). This used to be a trend till a few years back. Even on allocations of financial resources for the military, the retired military officers as strategic affairs analysts used to lambast the government for neglecting the needs of the armed forces with meagre allocations. Interestingly, the past few years have not seen substantial increases in military expenditure in real terms, but the forces have been able to engage in a costly and long military standoff against the Chinese in the high altitude regions of the Himalayas. It is not about resources or deficient assets, it is more to do with rationalization of choices.

Significant amounts of institutional, organizational and esoteric changes have taken place in the Indian military in recent years, especially after the Modi government assumed power in 2014. Consider the following: a) creation of CDS, approval of Theatre Commands, new military divisions, constitution of defence planning committee (DPC) in the higher military organizational domains; b) approval of monetization of military estates and assets, private participation in military and government owned entities, dilution of stakes and public listing of strategic defence public sector units (DPSUs) in the stock markets (even strategic entities like Bharat Dynamics Limited, which manufactures missiles or Hindustan Aeronautics Limited, which manufactures varieties of aerospace systems), approval for corporatization of Ordnance Factory Board (OFB), negative and positive lists of military manufacturing and services for self-reliance and exports in the military production domains; c) draft policy for military production and exports (DPEP) and review of defence procurement procedure (DPP 2018) and scrapping of defence offsets in the procedural / process domains; d) abolition of ‘multiple hats’ syndrome in Defence Research and Development Organisation (DRDO) by bifurcation of positions in the military R&D domain; and e) last but not the least, attempts to rationalize financial resources by keeping the budgetary allocations within a low percentage of the national GDP, striving to ensure a balance between revenue and capital expenditures and even further an attempt to reduce imports and increase domestic production shares by mitigating import dependency as well as saving precious taxpayers’ money. Never in the history of post-Independent India has the military sector experienced such diverse yet strong reforms in a short span of time, whose cumulative impacts can only be visible in time to come. Although ideational/doctrinal, procedural and structural reforms tend to receive maximum resistance from affected stakeholders, the Modi regime has faced little problem in carrying out a complex but comprehensive reform programme within the armed forces, a process which is likely to continue well into the future.

The process of reforms validates a clear vision marked by an overt intent to be a powerful military for the advancement of national interests and a set of directives from the political leadership for the eventual implementation of changes to be carried out by involved institutions. Most importantly, dedicated efforts in carrying out bold reforms in difficult times like the ongoing pandemic and continuing military standoffs at the Himalayas against the Chinese military connotes signs of decisive leadership and national resolve, which have been carried out diligently by the military. All these are valuable takeaways for the military leaderships from the CCC.

The article is part of Defence and Security Review, No.3, April 2021. Also, in the issue,  Brief No.1: "Flexing Muscles Can Wait:QUAD Must Engage Deeper First "; Brief No.2: From Cyber to Cartographic Warfare: China Goes Beyond Military Standoffs in the Himalayas.