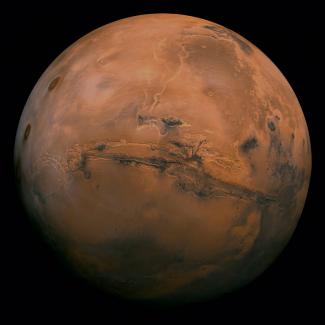 China successfully landed its rover on Mars on May 14, 2021. After landing, it took 17 minutes to unfold the solar panels attached to this system and send a signal back to Earth. It may be noted that the current distance to Mars from the Earth is 320 million km, and it takes about 17/18 minutes for radio messages to reach Earth. Presently, this rover is situated inside a lander and would take few more days to get out of the lander's belly and start moving on the Martian surface. It is expected to operate for three months. This rover called Zhurong (god of fire) made a perfect landing over a pre-selected area in Utopia Planitia (plain of paradise) on Mars.

The mission Tianwen-1, China's Mars probe, weighing five tonnes, was launched by a Long March 5 rocket on July 23, 2020. This mission consists of an orbiter and rover (placed inside the lander). It took around seven months for this probe to enter the Martian orbit successfully on February 10, 2021. Since then, the spacecraft was circling Mars and was picking up important observations to finalise the exact location for a landing site for the rover; this search was undertaken with the help of high-resolution cameras. The landing of the rover was undertaken by using a parachute.

Zhurong is a six-wheel solar-powered rover that weighs about 240 kg and has six scientific instruments to undertake several observations. They include cameras, a subsurface radar, a spectrometer, a magnetometer and atmospheric sensors. The subsurface radar would penetrate the Martian ground to search for signs of ice water beneath the surface. Cameras are designed to map the terrain, and the sensors are designed to analyse the chemistry of soil and rocks. These instruments also include a weather station and a magnetic field detector.

The Tianwen-1 Mars orbiter has seven payloads. The primary scientific aim of the entire mission is to study Martian topography and geology. Attempts would be made to study the thickness and sub-layer distribution of the Martian soil. Broadly, the mission's agenda is to understand the composition of the surface material, climate and environment of Mars. The orbiter would work for one year (minimum) and would survey Mars round the clock during that period.

The uniqueness of this mission lies in the fact that this is for the first time a magnetic field detector has been sent to the Martian surface. The magnetometer onboard the rover would be working alongside the magnetometer on the Tianwen-1 orbiter. The measurement of Mars' magnetic field is expected to provide some exciting information about the history of Mars, essentially because of the additional knowledge gained regarding the magnetic properties of rocks on this planet.

China had attempted to study Mars by sending a mission called Yinghuo-1 in 2011. However, this mission faced a tragic failure owing to the complications with the Russian probe to which the Yinghuo-1 probe was working in tandem. Yinghuo-1 and the Russian Fobos-Grunt spacecraft were launched together aboard a Ukrainian Zenit rocket on November 08, 2011. Yinghuo-1 was planned to separate from Fobos-Grunt during October 2012. However, the mission focus for both these probes was different. The Chinese probe was to orbit Mars for about two years and collect observations, while Fobos-Grunt's was to obtain surface samples from the Martian moon Phobos. Soon after the launch, Fobos-Grunt was required to perform two burns to depart Earth orbit and begin its journey to Mars. However, these burns did not take place, leading to mission failure. After this failed mission, China waited for a decade to conduct the next mission.

The launch window for sending a mission to Mars is available only once in 26 months. This is because only after those many months, the Earth and Mars get aligned to their closest points. The recent 2020 window for undertaking missions to Mars was used not only by China but also the US and United Arab Emirate (UAE). The UAE's Hope Probe is an orbiter mission and is working smoothly since its entry into the Martian atmosphere during February 2021. The US mission knowns as Perseverance was launched on July 30, 2020, and its rover successfully landed on Mars on February 18, 2021. Since then, this mission is working satisfactorily and has also flown a small helicopter (drone) on the Martian surface. This mission is a much-advanced one with major observational goals.

The success of Tianwen-1/ Zhurong is not an isolated success for China's space programme. It has made considerable progress in the arena of space exploration in a short duration. Presently, China already has its rover operating on the Moon's surface. Shortly, China's space station is also going to become operational. Along with Russia, it is planning to build a lunar research station. All this indicates that China is simultaneously making progress in various areas of space exploration. Chinese investments in the space arena are carried out in a planned and thoughtful manner. They appear to be making progress with a well-articulated plan overseeing scientific, commercial and strategic dimensions of space. The successful landing of a rover in the first attempt over the Martian surface helps China increase its prestige globally in science and technology.