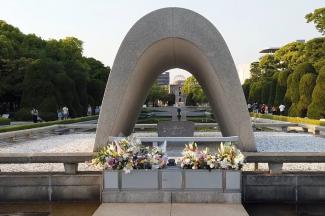 “Today we are all Hibakusha,” UN Secretary-General Kofi Annan said using the Japanese term for victims of the Hiroshima and Nagasaki nuclear bombings on the occasion of the Sixtieth anniversary of the events. Annan urged international leaders to take action against the spread of nuclear weapons.

The nuclear bombings in two Japanese cities on August 6 and 9, 1945 during the Second World War were not only the two most remarkable acts of war in recorded military history, but the bombing constituted a watershed as it opened a new age of world politics defined by the balance of terror. After the gory aftermath, the very invention of nuclear weapons has been held high as an ultimate symbol of death that has arguably given rise to a novel condition transforming the very concept of warfare.

Prior to the actual use of the nuclear bombs, the detonation of the world’s first nuclear device was taken place in the Alamogordo Desert in New Mexico on 16 July 1945. The sheer power of the nuclear device rightly prompted a rueful J. Robert Oppenheimer, the father of the atomic bomb to quote from the Hindu scripture, the Bhagavad-Gita, "I am become death, the destroyers of worlds." Barely twenty days later, the first and till now last military use of this new weapon occurred against Japan. At least four years before the Alamogordo test, the decision was taken by the United States to build a nuclear bomb under the ‘Manhattan Project’, well in advance of Hitler’s Germany. The bombing simply initiated an arms race that continues to this day as countries continue to harbour nuclear weapons.

The immediate effects varied considerably in the two cities because of the geographical situation. Hiroshima is built on a plateau, and the city was damaged symmetrically in all directions. But Nagasaki is built on mountainous ground, and the damage varied according to the direction. But the number of people killed at a given distance from the epicentre was roughly the same in both cities. Though the exact number of people killed is not known, almost all within 500 meters of the epicentres were dead by the end of 1945. About 60 per cent of those within 2 km died. The difficulty in estimating the exact number of people killed is related to the lack of figures for the population of Hiroshima and Nagasaki at the time. When the explosions occurred, thousands of Koreans and forced labourers were there. According to the best estimates, the total number of people killed by the two bombings exceeds 260,000.

The intensity of the heat generated by the nuclear explosions, estimated to have been 30000-40000C at ground level near the epicentres, lasted for one second. At a distance of 500 meters from the epicentres in Hiroshima, nearly 60 calories per sq. cm. of thermal radiation was emitted in the first three seconds. At a distance of 3 kilometres from the epicentre, the heat in the first three seconds was about 40 times greater than that from the sun. The heat at Nagasaki was even more intense. It was sufficient to burn exposed skin at distances as great as 4 kilometres. From the epicentres, within 20 to 30 minutes after the explosion, a massive fire began. This violent firestorm lasted for a half day in Hiroshima. The fire accompanied by black rain containing radioactivity from the explosion fell on Hiroshima for 7 to 8 hours.

Nevertheless, these bombings afforded the first opportunity to observe the effects of massive ionising radiation exposure in humans. But little is known about the effects of initial radiation. Nearly all who died within three weeks had signs of radiation injuries. The prodromal radiation, the early manifestations of an illness, was marked in the very severely exposed people. Most of them died within two weeks of blood cell abnormalities. Others died 30 days after the bomb explosion and had milder prodromal syndromes.

After the bombing, the blood cells of survivors were extensively investigated, and these investigations have continued for years. The most significant radiation effect has been the induction of malignant tumours in exposed survivors. The earliest evidence of radiation-induced malignant change was the occurrence of increased leukaemia in the late 1950s and early 1960s. The mortality rate for leukaemia reached a level of 30 times higher than that of the non-exposed Japanese. Clinical studies in both the cities in the late 1950s and early 1960s showed that the frequency of thyroid cancer was higher among survivors, especially women who were exposed to high radiation doses.

Most of the survivors alive at the end of 1945 suffered the late effects of the nuclear explosion. This delayed effect comprised a variety of illnesses like eye diseases, blood disorders, psycho-neurological disturbances, and disturbances of reproductive function.

Hibakusha or not, how many of us remember the holocaust? Although many of us do remember ‘Enola Gay, ‘Little Boy’ and ‘Fat Man, we miserably failed to recollect the sufferings of millions of Japanese while forgetting the lingering health and environmental effects and the resulted ordeal.