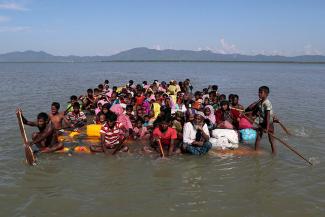 Ahead of the much-anticipated union elections in Myanmar towards October-November 2015, the Rohingya community in the country have been stripped of their franchise early this year in February following large scale protests by nationalist monks and political leaders. A referendum held to amend the Constitution that gave the Rohingyas voting rights, probably an initiative taken after surmounting international pressure, had to be revoked after the widespread protests that brought back horrific memories of the bloody 2012 clashes. To the Buddhist majority that strongly resent the Rohingyas, this was just a ploy by the politicians to win votes.

Last month, several escaped persecution in Myanmar on a perilous journey and were left deserted at sea, hopeful that some benevolent riparian neighbour, hopefully Malaysia, a Muslim majority nation, will take them ashore in refugee camps where they could be treated  better than the administration and Buddhist locals of Myanmar and find menial jobs to survive. This has been made possible by paying generous ransom to human smugglers, who often increase the price of smuggling upon safely reaching encampments in the dense jungles of Thailand or Malaysia. Inability to pay the traffickers results in the Rohingyas facing starvation, exposure to disease or even execution at the hands of the traffickers. This is proven by the discovery of mass graves running into a few hundred that authorities of host countries have found near campsites lately. Thousands of migrants might still be despairingly stuck at sea with no food and water supplies.

Why should the government now worry about the fate of a population of disfranchised people? Why should the Burmese administration burden itself by brainstorming for steps to make a better livelihood for people who have no state? Discussed here are some compelling reasons.

Identity Crisis: Who are the Rohingyas?

Myanmar, officially the Republic of the Union of Myanmar, is a state in Southeast Asia bordered by India, China, Bangladesh, Laos and Thailand. Burma was administered as a province of India until 1937 when it became a separate, self-governing colony. It was only in 1948 that Burma attained independence from the British. A significant portion of its boundary runs along the Bay of Bengal through which several thousand Rohingya Muslims are fleeing in packed boats with no food, water, home or certainty of their lives.

With a 1.3 million strong population, the Rohingya are the world’s largest population of stateless people as their home country refuses to acknowledge them as citizens. They are also the world’s most persecuted community according to organizations like Amnesty International. The treatment extended to these people is considered worst in comparison to treatment extended to other ethnic minorities in the nation. Though the Muslim population totals up to only around 4% of the population, the Buddhists all over Myanmar believe that the Muslims are striving to become the majority in the nation; their logic based on the number of children they have and the number of wives their religion permits them to have. In May this year, President U Thein Sein also enacted a population control law that limited the number of children the “white card holders” could bear.

The true identity of the Rohingya people is disputed as different versions are claimed by international scholars and the Rohingyas themselves and the Burmese scholars. The international scholars believe that the Rohingya, for generations, have belonged to the Rakhine state of Burma situated in the westernmost part of the country; while the Burmese scholars propagate that they are descendants of those who migrated from Bengal during the colonial rule of the British in Burma in the 19th Century. Today, they are only looked upon as foreign interlopers from Bangladesh and face entrenched prejudice.

Stand of the national government

The Burmese Government does not recognize the Rohingya as a "national race" and has stripped them of their citizenship under the 1982 Citizenship law, categorizing them as "non-national" or "foreign residents," under the Rakhine State Action Plan drafted in October 2014. The Rohingya must demonstrate that their families have lived in Burman for at least 60 years to qualify for lesser naturalized citizenship and the classification of Bengali or be put in detention camps and face deportation. The Burmese Government does not grant citizenship to children born outside of the country to Burmese parents who left the country illegally or fled persecution, such as those born in Thailand.

The national government in Burma has an official policy of segregation wherein restrictions are imposed on the Rohingyas alone. Though the post-military junta phase in Myanmar did not begin on the best note, reforms by the new government installed in 2011 looked promising. There was hope that probably the decades of international isolation would come to an end, however in hindsight that was a temporary phase.

What is disappointing is that the leaders of the ruling party – National League for Democracy -- who won by a landslide victory in the 2011 general elections after the long pressing rule of the military junta, have kept completely quiet on the issue of the Rohingya people out of fear of upsetting the Buddhist majority. It is more disappointing to the international community that such indifference has come even from a Nobel Peace Prize recipient of the country.

Myanmar is a source country for men, women, and children trafficked for the purpose of forced labour. For women and children subjected to sex trafficking in other countries, poor economic conditions have led to increased legal and illegal migration of Burmese adults and children to East Asia, the Middle East, South Asia, and the US. Here, they are subject to forced labour and sex trafficking. Men are forced to work in the fishing, manufacturing and construction industries, while women and girls are forced into prostitution or become domestic servitudes. Some Burmese economic migrants and Rohingya asylum seekers have become forced labourers in Thailand. Military personnel and insurgent militia unlawfully conscript child soldiers and continue to be the leading perpetrators of forced labour inside the country. Burmese children are also forced to work in tea shops, home industries, on plantations and as beggars.

When violence broke out between the communities in 2013, the official response of the Burmese government raised questions regarding the government’s commitment to equality before law. This has created a conducive environment to form a virulent Buddhist movement to germinate and let communal hatred thrive.

NGOs and role of international players

Several large and small non-governmental organizations and UN agencies champion the rights of the community, but so far very little progress has been made in improving living conditions of the people since the government of no country wants to absorb the influx of more stateless people. Neighbouring nations like Bangladesh, Indonesia and Malaysia have opened their doors to some of the refugees who are smuggled in with the help of human smugglers and have tried to provide them camps to the best of their abilities. But decades of extreme poverty and exclusion faced by the forerunners of Rohingya migrants in these countries do not guarantee a better future for the fresh boatload of these persecuted people either.

A UN resolution passed in December 2014 urged Myanmar to solve the citizenship issue of the Rohingya as soon as possible, but nothing concrete has come out of it. As a result, over half of Burma's population consists of diverse ethnic groups who have substantial numbers of kin in neighbouring countries living in apartheid-like conditions. The Naf River on the border with Bangladesh serves as a smuggling and illegal transit route. Bangladesh is struggling to accommodate 29,000 Rohingya from Arakan State, living as refugees in Cox's Bazar. In 2010, Burmese border authorities began constructing a 200 km wire fence designed to deter illegal cross-border transit and tensions from the military build-up along the border with Bangladesh, though that has not been able to completely prevent the exodus.

Often fetid refugee camps in these nations make for temporary havens for several thousand people, but are not enough as more and more Rohingya population escapes regularly from the clutches of the brutal treatment meted out to them in their home country. However, there is only a limited amount of financial resources that counties like these can devote to this community. Other neighbours like Australia, China and India have not offered any help this time out of the fear that it will only invite more migrants in the future. Lack of proper documents too prevents successful migrants from getting jobs legally or to send their children to government schools. The previously settled Rohingya communities offer the new batches of migrants with semblances of papers, including birth and marriage certificates, to make the process of getting menial jobs a little easier.

The strong anti-Muslim sentiment is widely present throughout Myanmar, especially in the state of Rakhine and has only spread further throughout the country. About 140,000 Rohingya Muslims were forced to flee their homes when riots broke out in 2012. International organizations and NGOs had come to the aid of the community back then, but this time there is an international consensus regarding actions of the Burmese government. It is a common conclusion that it is time for the parliamentary government to step up and take a strong stand for the protection of the rights and lives of their ethnic minorities. The Suu Kyi administration’s official stance on the issue has been widely disappointing to several states, regional neighbours and others.

The Rohingyas have also tried to overcome their hardships by establishing rudimentary schools; by helping one another find work; and by joining organizations that provide services, advice and a sense of solidarity. The United Nations High Commissioner for Refugees said it was supporting 31 “learning centers” across Malaysia for Rohingya children. Other schools operate without United Nations support. It is only seldom that the Rohingyas use their communal solidarity as a form of security for themselves.

Bangladesh has offered to relocate the 32,000 registered refugees to an inhabited island called Thengar Char, two hours away from the mainland. Not only is such a large scale move logistically impractical, but also the island disappears under floodwater for a few good months during the monsoon and is visited by pirates. Their ‘home country’ Myanmar has banned the community from fleeing but refuses to address the problem. Pakistan’s permanent representative at the UN has suggested for the cause to be taken up to the UN Secretary General Ban ki Moon, and that the recent resolution adopted on Rohingya Muslims at a Ministerial meeting of the Organization of Islamic Cooperation (OIC) be sent to the President of the Security Council.  Malaysia and Indonesia have agreed to provide temporary asylum to 7000 migrants.  The fate of thousands of the beleaguered community remains dark as they flee from one country to another in search of a basic need: an identity.