China As Key Variable For India And Russia’s Power Equation 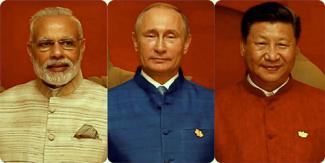 Due to unprecedented rise and global reach of China today, India and Russia are faced with some pertinent challenges. Some of the key issues are: How best to deal with China? Will the Cold War policy of containment work in case of China as mainstream communist ideology has failed for the most part in the post-globalised and post-Cold War phase? Or, simply a bland policy of engagement with China will work as China has adopted a more muscular approach in its conduct of foreign policy? Perhaps, a policy of co-engagement that American diplomat Zalmay Khalilzad has proposed might have resonance with a judicious mix of traditional notion of containment and proactive level of engagement concurrently.

Second, what does China want? China will prefer to have a mono/uni-polar Asia and a bi-polar World while India is increasingly trying to be an upper tier and emerging super power ready to flex its muscles with both ‘look west’ and ‘look east’ policies as well as with its enunciation of smart power policy combining both hard and soft power capabilities. cCan both countries co-exist with their respective power bases intact? Perhaps, Russia as a multiregional, status quo power and a country that supports a multi-polar world not completely dominated by US might prefer to see both China and India maintain their own spheres of influence without any major turbulence so as to upset the existing world order.  With 21st Century being increasingly viewed as the Asian Century dominated by China, India, Japan and other powers such as the Asian tigers -- South Korea, Singapore, Taiwan, Hong Kong, etc, Russia will try to fit in by having and continuing to have leverage and expansive diplomacy with both China and India.

One has to remember that there are commonalities between Russia, China and India on issues such as  support for enhanced and meaningful role for UN, denouncing NATO action on Kosovo, being sensitive about violations of national sovereignty ( Taiwan, Kashmir, Chechnya); and about Islamic threats as each country has large Muslim population and Muslim neighborhood, support for multilateral institutions such as BRICS, SCO ( Russia, China are members and India became full member in 2016) , APEC (Russia and China), SAARC ( China as an observer) , ASEAN ( Plus One meeting with India, Plus Three with China).

In order to successfully face the challenges of today's environmental realities and socio-political dynamics, it is imperative that both the nations acted on the principle of United we stand and Divided we fall.

This principle is not only confined to the geo-strategic realities of today's world order, keeping in mind the assertiveness of United States which is for the time being the sole superpower of the world, but also for the social, economic and regional realities in contemporary times.

The enormous potential of India- China alliance needs to be tapped to ensure that both countries can speedily join the group of developed nations and also for the creation of a new world order to diffuse the sole superpower status of a single nation and guide the world towards multi polarity. China, in spite of her growing status as a rising global power, needs to understand that in order to hasten economic development, her relationship with India must be cordial and accommodative. India, on the other hand, must leverage the advantage of her geographic and historical closeness with China by consolidating her position as a rising economic and regional power in Asia. The path to success lies in complementary rather than competitive nature of relations. Occasional irritants such as China’s opposition to India seeking  waiver for her application of NSG membership should not come in the path of larger strategic goals.  In order to derive a meaningful and viable relationship, there is a need to delve upon various areas of convergence between both the countries which can act as milestones towards the pursuit of excellence jointly. Multiple areas of cooperation between both the countries such as energy security, influence on world and regional forums (like the UN), East Asia Summit (EAC), among others, and trade and commerce will pus these two nations  to put their past behind and forge cooperative and meaningful associations to progress energetically towards peace, stability, economic development and long lasting strategic alliance in the emerging world order.

Possible short term forecasts involving India, Russia and China (in the next 10 to 20 years):

Cumulatively, hard and soft power capabilities are likely to boost power quotient of India and put the country in a state of good and beneficial bargaining advantage via-a-vis Russia and China. Similarly, both China and Russia will also try to bolster their respective hard and soft power tools.

As Asia and Europe become the epicenter of tectonic shift in international system and undergo major transformation in terms of power configurations, Russia, India and China are acutely aware of the need for political and security cooperation for ensuring regional order, stability and equilibrium. Russia, China and India will try to safeguard their respective national interests through both conventional as well as nuclear deterrence. All three countries recognise that cooperation and engagement cannot be sustained on sheer expediency, but has to be firmly rooted in shared values in both economic and strategic terms. The political culture of the three countries is also marked by the best of West and the East and by tapping into the abundant human, intellectual and technical resources that they have to offer to one another and also to the outside world.  That is precisely why Narendra Modi , Vladimir Putin and Xi Jinping found it so imperative to emphasize nourishment of economic and strategic values as the future trilateral political glue between the three major powers. In view of economic opportunities, geo-political and geo-strategic compulsions between India and Russia and with China playing a pivotal role, one hopes that the three leaders cooperate further. With  Xi Jinping’s stewardship and that of India’s Prime minister and the personal chemistry shared by Modi, Putin and Jinping remaining intact, the same momentum should be carried forward in 2018 and beyond towards a new paradigm of mutual benefit on a win-win proposition.

Author Note
Dr. Mohammed Badrul Alam, Professor, Department of Political Science, Jamia Millia Islamia University, New Delhi. [Disclaimer: The views expressed in this article are those of the author in his personal capacity. These do not represent views of SSPC]
Tags
China, India, Russia