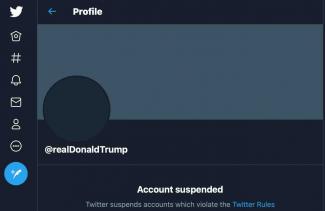 Twitter has banned US President Donald Trump for using its platform for life. This action by Twitter has made many uncomfortable. There is a view that companies providing digital platforms like Facebook, Twitter, WhatsApp and others have developed a kind of business monopoly, and they behave as per their whims and fancies. Today, such companies control the global digital content and hence there is a need to keep them on a tight leash. Also, there is a talk about how the present nature of legal structures is insufficient to control these tech giants. It appears that some policymakers, politicians, intellectuals, media and celebrities are indirectly lobbying for a rule structure to control the owners of social media platforms. Possibly, they want some new "draconian" rules in place, to cut the so-called blanket power available to the owners of these platforms.

None of these people supports the violent mob attack on the US Capitol on Jan 6, 2021. It is also highly unlikely that they agree with President Trump's 'doings' to portray that he has not lost the elections. At the same time, there is a fear that today it is President Trump, who is at the receiving end, and tomorrow it could be me! Possibly, hence the uproar against the action by Twitter.

It is a reality that the State is supreme, and the private sector has to abide by the rule structure set by the State. So, digital social media platforms should not have any "sweeping immunity". This requires developing some form of mechanism to moderate the social media content and the style of functioning of the social media service providers. Possibly, that is why a few months back Facebook's Mark Zuckerberg, Twitter's Jack Dorsey and Google's Sundar Pichai were summoned before the US Senate committee for questioning. Globally, there is a growing concern about the spread of misinformation via such platforms.

However, it is essential to note that the people, in general, have ensured that these platforms get the type of importance they enjoy today. For the last few years, the entire world is behaving as if life cannot exist without social media. Today, the situation is such that every part of society has almost become subservient to social media. The utility of social media platforms is unquestionable. However, the real question is 'why the society has made itself so dependent on these platforms and behaves as if it just cannot live without social media'?

Imagine, the President of the most powerful nation in the world was using Twitter, a platform belonging to a private agency, as a podium to run his foreign policy.  On the other hand, he had issues with Hillary Clinton using Gmail for official correspondence. He felt that Russia and China had used the cyber medium to manipulate the US elections. Many others like him always want to use the digital medium to their advantage, but start calling these platforms names when they go against their interests. It is plain and simple, Twitter is a 'shop', and the shopkeeper has the right to decide who should be his client!

For all these years there have been cases involving agencies like Apple, WhatsApp and few others denying access to intelligence services and police. Remember all these agencies like Twitter, Facebook, etc. are there for pure business; their interest is to earn profits. They will create a very attractive product. But before using such products, one must think about its advantages as well as limitations. Unfortunately, modern-day politicians believe that just because various digital platforms and gadgets help them speedily and easily pass on information, such platforms end in themselves.

The Jasmine Revolution (2011) case often gets quoted as the first situation in history when Tunisia witnessed a change in leadership mainly due to its netizens using various digital platforms very effectively during the 28-day campaign.  But it is important to note that during the last decade, various other revolutions have happened or some are happening even at this point, led not solely by social media campaigns. Besides, social media is only a platform; there are and could be many such platforms. Removal of emergency in India, which stayed for 21 months from 1975 to 1977, and subsequent defeat of Mrs Indira Gandhi could be viewed as a revolution in modern India. This epic phase of Indian politics happened in the no social media period. The revolutions occur when the population revolts against the government, typically due to perceived oppression and presence or absence of social media does not matter.

Unfortunately, politicians like Trump believed more in theatrics than content and hence the overdependence on Twitter. Twitter's so-called triumphalism by banning Trump today offers an opportunity for introspection. Not only politicians, but the common people should realise that this social media addiction comes at a cost. It is unbelievable how politicians worldwide have become so dependent on social media platforms that are owned and controlled by private players. They fail to realise that what people are interested in is the nature and quality of the government's work and not a leader who tweets on anything and everything. The novelty of social media is no longer there. People have understood the game of fake news factory, troll-army, and their 'shelf life', which are fast getting over.

Mediums like Facebook mainly emerged as platforms that cater to people interested in knowing what is happening in the lives of other people or want other people to understand what is happening in their lives. At the same time, Instagram is more about showing-off your exotic vacations and luxury shopping list, and nothing more. For Indian electronic media, Twitter is providing the most cost-effective option for 'true journalism'! They just pick some irrelevant tweet of the day and conduct their 9 PM news tamasha!

Over the years, the politicians, media and common people have allowed these tech companies to the proposer. All this has happened because of the human lust for publicity. Hence, now to cry that the action by Twitter to ban a sitting President amounts to big-tech companies playing a direct role in a country's politics is childish. We all are responsible for the creation of this mythical demon called "Bhasmasura who attempted to test his power on Lord Shiva who just blessed the demon with immense power", and it is pointless to blame Twitter for that.